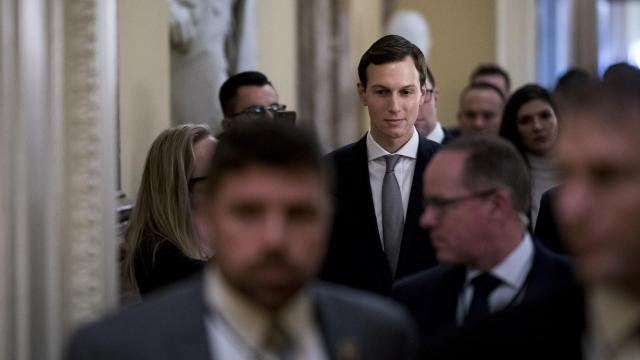 MEXICO CITY — The outgoing president of Mexico had expected to end his troubled term on a positive note — signing a new free-trade deal with the United States and Canada on Friday. Now even that moment of triumph has gone awry.

An announcement that President Enrique Peña Nieto would bestow Mexico’s highest honor for foreigners to Jared Kushner, son-in-law of President Donald Trump, for his role in pushing through the trade pact has incited fury in Mexico, where anger and resentment toward Trump is intense.

The Foreign Ministry announced the recipient of the award, the Mexican Order of the Aztec Eagle, on Tuesday. The incredulity and outrage began to spread almost immediately.

“In Enrique’s defense, the recognition of Kushner has succeeded in doing something we all thought impossible — THE UNION OF THIS COUNTRY against the contempt shown by this decision,” Javier Risco, a radio announcer, said on Twitter.

The Aztec Eagle honors non-Mexicans for their service to the country. Once Kushner is decorated, he will be in the company of Queen Elizabeth II, King Philip VI of Spain, Nelson Mandela, Bill and Melinda Gates, Gabriel García Márquez, historians, scientists and a rock star philanthropist, Bono.

The president, who will present the award this week on the sidelines of the Group of 20 meeting in Buenos Aires, Argentina, leaves office Saturday after a six-year term. His success in pushing through economic changes was overwhelmed by widespread corruption and a surge in violence.

In comments to reporters Tuesday, Peña Nieto called Kushner “a great ally” of Mexico who had “truly contributed to reaching this agreement.”

Practically nobody else in Mexico appeared to see it that way.

Decorating Kushner was viewed as an endorsement of Trump, who began his presidential campaign by insulting Mexican immigrants and calling for the United States to build a wall along the 2,000-mile border — a demand he has been repeating this week during budget negotiations in Washington.

“Kushner is the son-in-law of someone who called Mexicans ‘murderers and rapists,' ” Enrique Krauze, a historian, wrote on Twitter. “Giving him the Aztec Eagle is a supreme attitude of humiliation and cowardice.”

In Washington, White House officials, frustrated by the criticism surrounding the award, tried to draw a line between the work Kushner had done to establish better trade relations and the disparaging words his father-in-law has used to describe the Mexican people. But officials did not initially respond for requests to publicly say more about the honor Wednesday. Instead, a White House official who spoke on the condition of anonymity said: “Jared is very honored to receive this award. A lot of the work that he does is behind the scenes. He keeps his head down on trying to achieve the best outcome for the United States and its partners.”