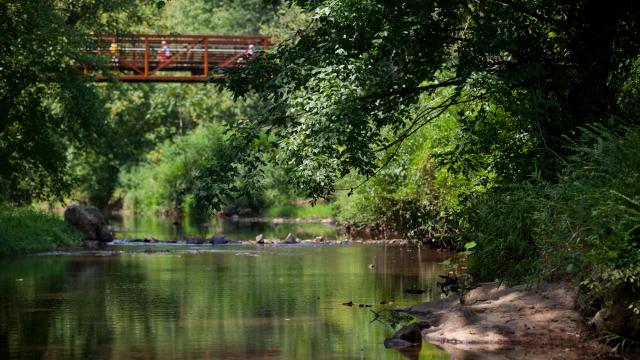 For most Hillsborough residents, it's hard to remember a time before the Riverwalk.

Stretching a little less than two miles along the banks of the Eno River, the trail connects Gold Park in west Hillsborough to the eastern part of town, including the downtown district. Although the first phase of the Riverwalk opened a little more than 10 years ago, it's already been cemented into the fabric of the community.

"To our community, it feels like it's been here for 20 years. It has become the heart of our community in many ways," said Jennifer Weaver, the mayor of Hillsborough. "In Hillsborough, we're really fortunate that we have so many outdoor public spaces where people can hike and walk and be out in nature, but the Riverwalk really is our crown jewel. I would say it's the one place in town where you see every type of person — every age, racial and ethnic group, multiple languages, physical ability — everybody uses Riverwalk. It's a really important space for us."

While the Riverwalk itself is fairly new, the land it encompasses is home to a storied history. In the 1800s, a stretch of it was used by early citizens for transportation and socialization. Even further back in time, the same paths were frequented by Native Americans as a popular trading route.

Now, the Riverwalk has taken on a new history, and a new level of popularity.

The Riverwalk takes you from the Occoneechee Mountain, a settlement of the Occaneechi tribe and the highest point in Orange County, to the Occoneechee Speedway, which is one of the two original NASCAR tracks and the only surviving dirt track from NASCAR's inaugural 1949 season.

"That length is about two and a half miles. It takes you through Gold Park and there are places like playgrounds and dog parks for people to enjoy along the way. It's hard to imagine being Hillsborough without the Riverwalk — especially right now," said Weaver, referencing these socially distant times and a greater need for people to get outdoors.

The Riverwalk is part of North Carolina's Mountains-to-Sea Trail, which traverses the state from the Great Smoky Mountains to the Outer Banks. Backpackers and hikers can start at the trail's western endpoint, Clingman's Dome, and end at the trail's eastern endpoint of Jockey's Ridge State Park in Nags Head on the tallest sand dune on the east coast. Weaver said it made sense for the state to include Riverwalk on this trail.

"The idea for Riverwalk really started about 20 years ago with a group of citizens who just felt like the river was a really important feature in town and they wanted to see it opened back up for public use," said Stephanie Trueblood, Hillsborough city planner and project manager. "I don't think we ever imagined it would be as popular as it is."

A massive public project like the Riverwalk requires years of planning, and for Trueblood and her team, that process alone took around three years to complete — from acquiring the land to hosting public meetings to taking environmental concerns and zoning into consideration. Since the walk would be highlighting the natural landscape of Hillsborough, one of the biggest concerns during the planning phase was making sure construction didn't disrupt the surrounding habitat.

"We were very careful to look at what kinds of constraints we needed to observe, in terms of stream buffers and trying to find all the ways that construction could be as low-impact as possible to preserve as much of the natural environment as possible," Trueblood said.

Preserving the environment during a massive construction project adds an extra challenge to an already difficult process, but for those involved with the Riverwalk project, the inconvenience didn't matter much if it meant keeping the forest intact. In fact, the team even went so far as shipping in special equipment from Florida to minimize their impact on the trees.

"Riverwalk offers a place where people can get out and exercise and feel safe, even for those who are usually limited in being able to use nature trails. That's what I'm most proud of," Trueblood said.

And the community certainly uses it.

When the Riverwalk was first assessed, it was estimated that an average of 49 trips were made per day. Now, that number is in the hundreds.

In addition to using the trail for transportation, there are also regular events and activities hosted on the Riverwalk. Community organizations like the Hillsborough Running Club have leveraged the beauty and mileage of the Riverwalk for its annual Historic Hillsborough Half Marathon.

The race is designed to showcase many of Hillsborough's historic sites and scenic routes. Participants run past historic places such as the Old Orange County Courthouse, Burwell School, Margaret Lane Cemetery, Occoneechee Indian Village and others.

"Much of the Riverwalk is handicap accessible, so you can be on a wheelchair on the Riverwalk. Large stretches of it are paved," said Weaver, echoing Trueblood's comments about the trail's accessibility for all. "Additionally, history is an important part of the Hillsborough identity and along the Riverwalk are several interpretive signs where you can learn about the human and natural history of the areas along the path."

The passion for the environment that propelled the construction of the Riverwalk has spread to community groups like local Girl and Boy Scouts troops too. These young scouts comb through the trail to remove invasive species, and volunteer groups regularly clean up the small amount of litter they find to keep the Riverwalk pristine.

Many schools also use the trail to take guided nature walks, as a convenient path to the local library or as an outdoor classroom of sorts. Local 5ks and walkathons not associated with the Hillsborough Running Club often utilize the trail too. Trueblood hopes local artists will consider showcasing their work around the trail.

Birdwatching, tree identification, biking, nature walks — the leisure uses of the Riverwalk are diverse and ever-expanding. The city planning team never expected to see such a vibrant result, but the response has opened the door to explore more projects and expansions of a similar nature, changing the community for the better in the process.

"The idea that this Riverwalk is giving people a space to congregate away from their phones and televisions and social media, and turn to history and nature. It's a community building place that we're going to be able to build on and hopefully extend to other parts of town for years to come, which is really exciting," Trueblood said.