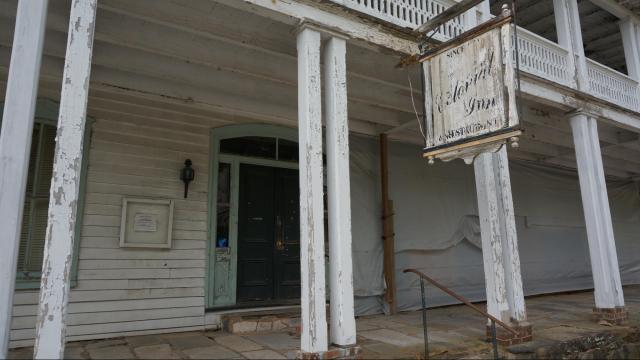 The Colonial Inn, which historians say was built in 1838 – a weathered sign that hangs from the West King Street building says 1759 – survived the Civil War and entertained guests as notable as the late actor Paul Newman for generations. But it has been closed for more than a decade and is now a rundown eyesore, with rotting wood, peeling paint and a weed-choked sidewalk.

Chapel Hill businessman Francis Henry, who bought the inn at auction in 2002, tried to raze the inn last year, but Hillsborough officials rejected his request for a demolition permit.

After months of trying to work with the owners to find ways to make needed improvements to the inn, town officials will discuss condemning the building via eminent domain at a Monday meeting, Commissioner Eric Hallman said.

Hillsborough Fire Marshal Jerry Wagner has in recent weeks had to secure the building and turn off power to the property out of safety concerns, Hallman said.

In a Sept. 14 letter to Henry, Wagner said the collapsed roof, foundation and holes in walls and ceilings needed to be repaired or brought up to code.