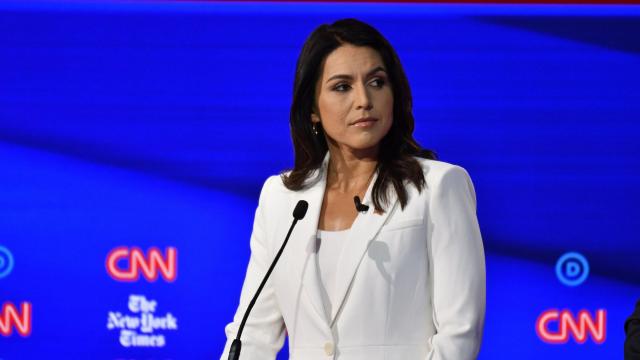 CNN — Former Democratic presidential nominee Hillary Clinton said Thursday the Russians are currently "grooming" a Democrat running in the presidential primary to run as a third-party candidate and champion their interests.

The comment appears to be directed at Hawaii Rep. Tulsi Gabbard, who has been accused of being cozy with Russia in the past.

"I'm not making any predictions, but I think they've got their eye on somebody who is currently in the Democratic primary and are grooming her to be the third-party candidate," Clinton said, speaking on a podcast with former Obama adviser David Plouffe. "She's the favorite of the Russians."

Clinton never names Gabbard, but there are only five women running for President -- Gabbard, California Sen. Kamala Harris, Massachusetts Sen. Elizabeth Warren, Minnesota Sen. Amy Klobuchar and author Marianne Williamson -- and none of the other woman have been accused of being boosted by Russia.

Clinton did not provide proof about how Russia is "grooming" Gabbard. She and her team pointed to allegations that Russian news and propaganda sites often report on Gabbard's campaign and that moments in Gabbard's campaign have been reportedly amplified by trolls and bots on Twitter with ties to Russia. Gabbard has denied those allegations.

"They have a bunch of sites and bots and other ways of supporting her so far," Clinton said.

"Thank you @HillaryClinton. You, the queen of warmongers, embodiment of corruption, and personification of the rot that has sickened the Democratic Party for so long, have finally come out from behind the curtain," she tweeted.

"From the day I announced my candidacy, there has been a concerted campaign to destroy my reputation," she added. "We wondered who was behind it and why. Now we know — it was always you, through your proxies and powerful allies in the corporate media and war machine, afraid of the threat I pose."

"It's now clear that this primary is between you and me. Don't cowardly hide behind your proxies. Join the race directly."

Asked earlier if the former secretary of state was referring to Gabbard in her comment, Merrill told CNN, "If the nesting doll fits."

"This is not some outlandish claim. This is reality," Merrill said. "If the Russian propaganda machine, both their state media and their bot and troll operations, is backing a candidate aligned with their interests, that is just a reality, it is not speculation."

Gabbard, in a late August interview with CNN, ruled out a third-party bid.

"I will not," the Hawaii Democrat told CNN. "No, I have ruled that out."

Gabbard has tried to fight off the charge that she is being pushed by Russian interests.

"Just two days ago, the New York Times put out an article saying that I'm a Russian asset and an Assad apologist and all these different smears," Gabbard said, referring to a recent story that said she is being backed by Russians on Twitter. "This morning, a CNN commentator said on national television that I'm an asset of Russia. Completely despicable."

Clinton also accused Jill Stein, the Green Party candidate in both the 2012 and 2016 elections, of being a "Russian asset."

"That's assuming Jill Stein will give it up, which she might not, because she's also a Russian asset," Clinton said. "Yes, she's a Russian asset, I mean, totally. They know they can't win without a third-party candidate."

Stein's campaign, which earned nearly 1.5 million votes in the 2016 election, was part of Russia's meddling efforts, according to a host of congressional reports, including a Senate Intelligence Committee report that indicated Russian social media efforts to interfere in the 2016 presidential election included messaging in support of Stein.

A summation of the report's findings on "comprehensive anti-Hillary Clinton operations" said while the group's assumed Twitter personas had some pro-Clinton content, "the developed Left-wing Twitter personas were still largely anti-Clinton and expressed pro-Bernie Sanders and pro-Jill Stein sentiments."

Stein, who had dinner with Russian President Vladimir Putin in 2015, has also compared Russian interference in the 2016 election to American overseas efforts.

"I think it would be naive to think that Russia did not try to interfere." But, she said, "Certainly that's what the United States does," though she added, "that's not to justify it."

"Interference is wrong and it's an assault against democracy, and it should be pursued, but (the United States) should pursue it knowing that we do it, too."

CORRECTION: This story has been updated to reflect when Clinton made the comments and to provide more context about Clinton's allegations.