First responders received a call about the crash, near Jones Sausage Road, just before 5 p.m.

The call mentioned 15 vehicles, but when officers arrived, they found 30 vehicles involved in the crash.

I-40 was shut down for three hours as officers worked the scene. In addition to the seven people sent to hospitals, five people were treated at the scene.

One person had been sent to WakeMed with serious injuries but was later in stable condition, the SHP said. The other injuries were minor.

Bill Newman said he and his coworkers were nearly involved in the massive crash.

"We saw a plume of smoke, water splash up and everybody's brake lights slam," he said. "We stopped about 25 feet in front of the wreck."

In construction zones, authorities say drivers should slow down and increase distance from other cars.

"It was like a domino effect," Newman said. "Everyone started slamming on their braked and nobody could stop in time." 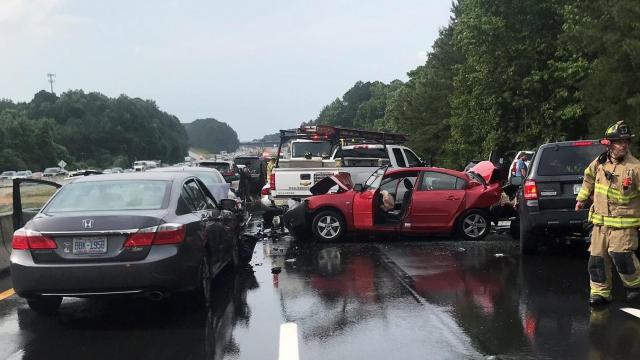 Several central North Carolina counties had been under weather advisories as storms marched through the region.