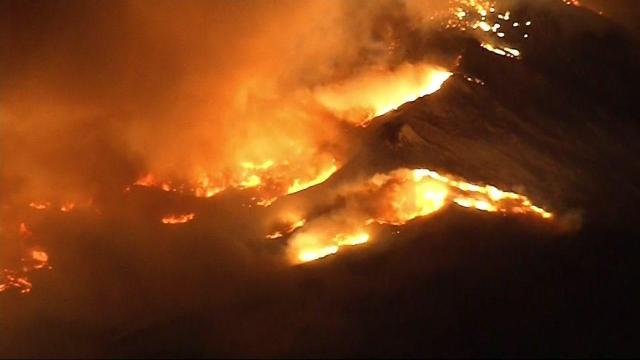 Two people were burned in one hot spot, known as the Lilac Fire, which was about 45 miles north of San Diego. The fire went from about 10 acres to 1,000 acres in less than four hours. Five structures were destroyed, according to Cal Fire. The agency didn't release the nature of the injuries to the burn victims nor give their conditions.

Another fire, just to the north of the Lilac Fire, had consumed 220 acres.

The wildfires are testing the stamina of firefighters and military personnel, who have been laboring almost nonstop. On top of exhaustion from the long hours, they're also trying to stave off the effects of smoke inhalation and the airborne embers irritating their eyes.

The state National Guard's 146th Airlift Wing out of Oxnard has also joined the fight, even though roughly 50 of the National Guardsmen involved had to be evacuated themselves, said spokeswoman Maj. Kimberly Holman. Three lost their homes in the blazes, she said.

"We have folks who lost their homes and many who were evacuated and still they did their duty and worked to help their community," Holman said.

The unit was grounded late Thursday morning because of turbulent winds. On Wednesday, two C-130s were able to drop about 18,000 gallons of retardant during runs in the Ojai area in Ventura County, she said.

Grounding planes is sure to complicate the arduous battle against fires that have pushed 110,000 Californians from their homes. Compounding problems Thursday were dry weather and merciless winds, with gusts predicted to reach the strength of a Category 1 hurricane in mountainous areas.

About 5,000 firefighters -- half of them assigned to the massive Thomas Fire alone -- have been fighting the blazes as they race across hillsides and through neighborhoods, officials said. Almost 9,000 homes are without power. Officials have shut down hundreds of schools spanning at least 15 districts.

At 96,000 acres, the Thomas Fire is roughly the size of Colorado's capital. The blaze was 5% contained as of early Thursday.

It could go down as one of the most destructive fires in state history, and at one point, spread over 31,000 acres in the span of about nine hours -- roughly an acre a second. At that rate, it would have consumed New York's Central Park in about 15 minutes. The plume from the fire stretches 1,000 miles into the Pacific Ocean.

• New measures: Fire officials said Thursday brought a historic fire danger score and prompted them to upgrade their color-coding system to include purple for the first time.

• More evacuations: Several cities in the Ojai Valley are under mandatory evacuation. Satellite images by the National Weather Service showed the city of Ojai surrounded by fires. Nestled in the Topatopa mountains, Ojai -- a bohemian village of 7,600 that prides itself on boutique hotels, mom-and-pop shops, hiking and local food -- is a popular tourist draw.

• Areas of concern: Firefighters said they are keeping the Skirball Fire at bay but worry it will jump west of Interstate 405.

• School closures: More than 260 Los Angeles public and charter schools will be closed Thursday and Friday.

Wednesday was bittersweet for Eric Rosenberg, with his sadness at seeing his neighbors' homes destroyed punctuated by a moment of pure joy: His wife gave birth to a healthy daughter, Mila.

As he filmed the "heartbreaking" scene in his Ventura neighborhood, where six neighbors' homes had been reduced to rubble, he explained he had to rush back to the hospital to see his wife and newborn.

"My little fire baby decided today was the day," he said.

On Thursday, he said his wife and child were doing well, and his home had survived the fire.

A neighbor knocked on his door early Tuesday morning and told him the fire was getting close.

"I walked out the front door, and it looked like a war zone," Rosenberg said.

"Last trip back inside I grabbed my ketubah off the wall and headed out," he said, using the Hebrew word for a wedding contract.

On Thursday, Rosenberg and his wife were staying with his in-laws in Carpinteria, about 25 minutes from Ventura, and "We can see the billowing smoke clouds in the distance," he said.

Purple is the new red

The battle to contain the blaze is especially difficult on the Santa Barbara-Ventura County line, where the terrain is steep and rugged, he said. Fire officials hope to get as many as a dozen helicopters in the air Thursday, but the winds have been playing havoc on the choppers and fixed-wing aircraft, said Kruschke, the Ventura County fire official.

Officials say they will see a "recipe for explosive fire growth" and an unprecedented fire danger score. According to the Los Angeles Fire Department, experts grade fire danger by measuring the moisture in dead vegetation, the temperature, wind speed and direction, and then assessing historical weather information.

It's not the only first that firefighters have experienced with the Southern California blazes. The scale used to measure the potency of the Santa Ana winds typically runs from gray, for little or no danger, to red, for high danger.

"The forecast for (Thursday) is purple," said Ken Pimlott, director at the California Department of Forestry and Fire Protection, or Cal Fire, according to CNN affiliate KCBS. "We've never used purple before."

The Thomas Fire in Ventura County, which sits just north and west of Los Angeles, grew significantly Wednesday to about 150 square miles. The Creek Fire in Los Angeles County has spread to more than 12,600 acres and is about 10% contained. The Rye Fire in Santa Clarita is holding at 7,000, with 15% containment, while the Skirball Fire has burned about 475 acres and is 20% contained.

"There are still a few people still in their homes in the evacuation areas, and they should come out. There are still embers that can move and catch as we have wind conditions," Los Angeles City Councilman Paul Koretz said of the Skirball blaze.

As of midday Thursday, the Thomas Fire had destroyed 73 residences, three commercial structures and 15 outbuildings, Cal Fire said, emphasizing that the numbers are likely to rise once officials are in a better position to assess the damage.

California Gov. Jerry Brown has declared an emergency for the county, freeing state resources such as the National Guard to support response efforts.