High school students: Here's how to prep for college applications 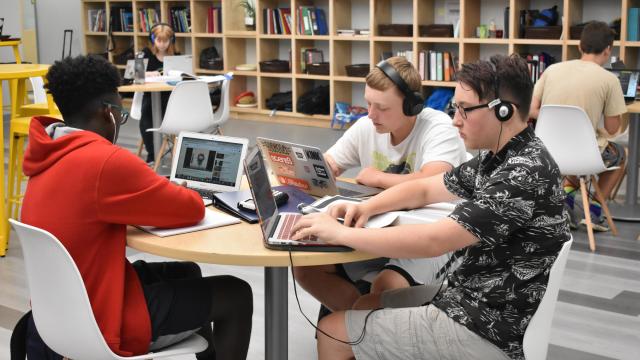 The process of applying to colleges can be overwhelming for high school students and parents alike. In 2017, 18.4 million students were enrolled in colleges and universities in the United States, demonstrating the competitive nature of the application process.

James Taylor, the head of Upper School at the Montessori School of Raleigh, said he's noticed a significant difference from when he first started teaching in regard to the application process.

While these numbers seem daunting, Taylor and MSR's college counselor, Belinda Wilkerson, broke down some suggestions for what your child can be doing at each stage of high school to prepare for the college application process and their future education.

As a First Year and Sophomore

As early as freshman year of high school, students should start considering career fields they would be interested in. These can be discovered by doing career exploratory work; for example, taking surveys designed to identify key interests. By sophomore year, a student should begin considering what they're interested in studying and researching what schools would cater best to those interests.

"[Get] students to think about, 'Well, if I'm interested in theater and engineering, I need to be looking for universities that might let me pursue both passions, and not just one of them,'" Taylor explained. "Or maybe they're talented in just one area, but they want to explore another to see where it leads."

He added, "Whatever thinking a student can do in advance about potential interests helps to refine the search."

Wilkerson also stressed the importance of getting involved in extracurriculars in these first two years of high school, and finding some that you want to stick with. These can range from clubs, to volunteering, to an afterschool job or taking care of younger siblings.

By junior year, students should be taking the most rigorous classes possible for them – whether that be through Advanced Placement, International Baccalaureate or honors programs. This is also the time when they should begin preparing for the ACT, SAT and other standardized tests.

Some schools are beginning to move away from standardized testing, according to Wilkerson, but this concept is fairly new and not wide spread.

Additionally, outside an academic setting, students should begin researching colleges through all the available options.

"They can visit the campus, which is great if they have the ability to do that," Wilkerson said.

She also noted Raleigh holds an annual national college fair in March at the Raleigh Convention Center where national and international colleges send representatives to talk with potential students. Rather than visit every single booth, Wilkerson encourages students to make a list of 10 colleges they'd want to learn more about. From there, they can have more genuine interactions with school ambassadors.

Sometimes, college representatives will visit specific high schools. If this happens, Wilkerson encourages students to make an appointment to talk to the representative if they have any interest in the school.

Finally, students should create a Common Application account in the spring of their junior year. Common App is an undergraduate college admission application "representing nearly 900 diverse institutions of higher education." The non-profit membership organization connects "applicants and those who support them to a wide array of public and private colleges and universities across all 50 U.S. states, and 20 countries," as stated on CommonApp.org.

While the questions for specific schools may change, the main parts of the application stay the same and should be filled out as soon as possible. It's also good to get an idea of the kind of questions being asked by different colleges, according to Wilkerson.

"Once students hit the summer right before their senior year, we really start getting heavily into beginning the application process, especially with writing the essays," Wilkerson said. "We try to get as many parts of the essay writing done during the summer as possible, starting with the personal statement, because that's usually the one that's the most daunting."

Personal statements can be hard to tackle since there is no prompt and the direction it takes is up to the student's discretion. Contemplating how to formulate the personal statement and what to say ahead of the deadline will give students ample time to work on several drafts and glean feedback from trusted teachers and advisors.

Finally, as a senior, it's most important to ensure that you've collected everything you need for your applications, whether that means items on the Common Application or on a separate site.

It's also important to know the differences between Early Decision (a binding choice to commit to a college if they accept you), Early Action (a non-binding, early-application choice) and Regular Decision (which has a later deadline). Wilkerson also encourages students to send their applications in at least 10 days before the deadline.

"You never know when technology is going to act up," Wilkerson said. "And if you're applying through the Common App, you don't want to be there ... at 11:59 p.m. competing with 100,000 other students who are online at the same time trying to send in their application."