Hidden History: Remnants of the wall with cannons that surrounded Raleigh 150 years ago 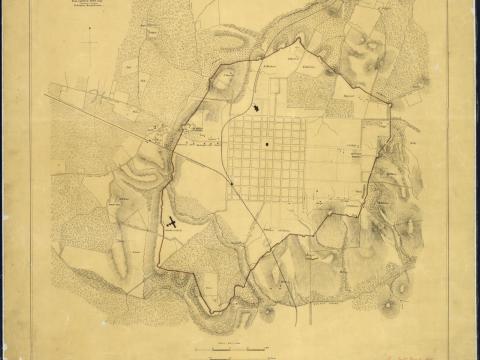 It may be hard to imagine when cruising down S. Saunders Street, but a wall of earth, trenches and cannons once overlooked the hillside there.

In fact, most of the City of Raleigh was surrounded by a wall in the 1860s.

Governor Vance ordered the construction of a 5-foot-tall wall of breastworks to completely surround the city in 1863. Raleigh's citizens had gathered at the Wake County courthouse to petition for fortifications.

"Union troops were approaching Raleigh from the east, and citizens feared the worst," according to historic background from the highway marker.

Vance then ordered enslaved men from local plantations to come build the long line of entrenchments, which primarily consisted of a mound of dirt as tall as man's 'breast' – hence the nickname 'breastworks.' Then, a trench would have been dug behind the wall, to provide cover for soldiers. Every 300 yards or so, a more sturdy cannon emplacements with flat sides would have jutted out from the wall, possibly using stones rather than just dirt.

So how could a wall surrounding the entire city, including cannon emplacements and artillery redans and entrenchments, simply disappear?

The answer is: It didn't. Remnants of this relic are still visible in the topography of parts of Raleigh. You've likely driven past an odd juxtaposition of low land, followed by a sudden spike in elevation, and never even realized you're passing a place where soldiers once hid in entrenchments. 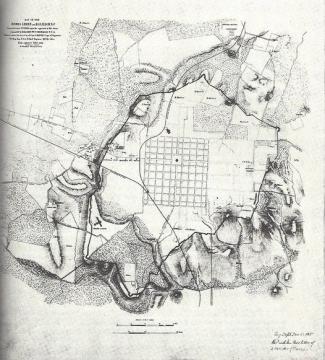 The map of the breastworks and cannon emplacements

The most commonly-seen map of the breastworks indicates where the wall once stood. A closer look shows pointed or flat areas, indicating where the cannon emplacements likely stood.

"I overlaid the original map, drawn by the Confederate Lt. Colonel who engineered the wall, with the modern landscape on Google Maps," he said.

He used anchor points to help ensure accuracy – like the State Capitol building, the Mordecai House, and the original Dix Hospital building footprint, which are still standing in the same location as during the Civil War.

"I used these anchor points to lay out the original map on the modern landscape. I'm not a topographer, but I believe most locations on this map are probably within 20 to 100 feet accurate," he said.

He has used his map to visit locations around the city and try to find unusual landscapes that could indicate the wall's remains.

Remaining segments of the earthworks and trenches

According to the NC Highway Marker for the breastworks, the remains of the earthen breastworks could still be seen until the second half of the twentieth century in the vicinity of Peace College and other locations.

The website also says remains could still be seen 1/3 mile west of Wake Forest Road at Poplar Street in Raleigh in 1940. 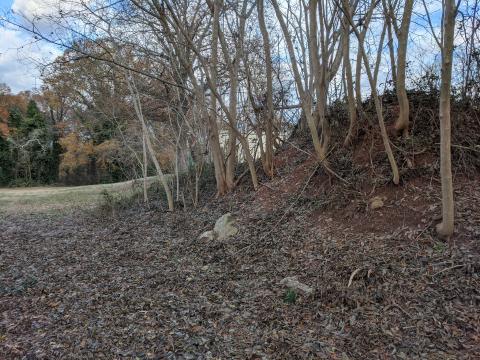 The remains were described as being "flat terraces with pea gravel that tier their way down the steep slopes above the creek."

It seems likely Raleigh's cannon emplacements and artillery sections of the wall would have strategically overlooked hillsides, giving troops the high ground advantage over approaching soldiers.

For example, Bredenberg's map suggests that the large slope near S. Saunders Street, overlooking modern day Walnut Creek, could have been where a redan, or cannon emplacement, once stood – overlooking the valley below. 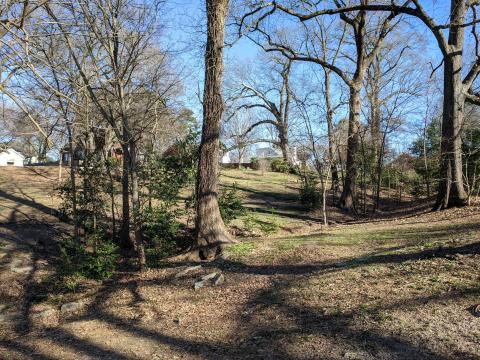 There are also sudden elevation changes in the modern day Mordecai neighborhood and nearby park, as well as hills containing large chunks of gravel, that could indicate topography created by 5-foot-earthworks and deep trenches.

In fact, one resident of Mordecai has said he believes he once had a cannon in his yard.

"Remnants [of the earthworks] may be seen behind Mordecai Historic Park," said a representative from Historic Yates Mill County Park on social media. 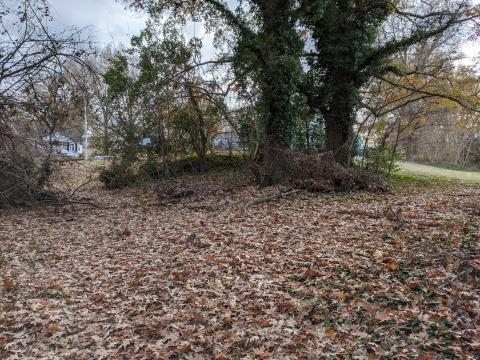 The earthworks and all relics within could be completely destroyed

Bredenberg worries that major development happening in downtown and southeast Raleigh could destroy – among many other important pieces of history – some significant stretches of possible remnants of the wall.

"It's a significant stretch, and a stretch where I think there's a greater likelihood of finding some remnants, whether above ground or below ground," he said.

Because it was built by enslaved men, but ultimately never manned by Confederate troops, it's possible remnants and relics discovered could shed light on the history of the enslaved population in Raleigh.

According to the landmark report for Oberlin Cemetery, one Black man named Andrew Andrews, a former slave of George Mordecai, gained fame for drawing a Confederate pension for helping build the breastworks in 1865. Is it possible other formerly enslaved men were paid or drew Confederate pensions for helping with the wall, and could their stories be uncovered?

Even as late as the 1930s, children would climb on the rolling breastworks hillsides and dig for bullets. It's possible modern archeologists could use remote sensing to locate disturbances underground.

"Without even having to dig, they can find things," he said.

He hopes to preserve the segments of the earthworks, or at least allow historians to search for relics before the segments are dug up and destroyed.

Bredenberg also cautions against anyone but historians and archeologists tampering with possible breastworks, at least until preservation work can be done. "Any remnants are going to be fragile, and I would hate to have people disturbing them before they can be studied and preservation efforts undertaken."

Some segments can still be seen in the rolling hillsides or unusual topography. So the next time you drive past a strange hillside in downtown Raleigh, ask yourself: Is this just a hill, or is it a piece of lost history?

You'll be surprised how much lost history you drive past everyday.

Bredenberg has a website called Raleigh's Wall where he records his research and findings on the wall, as well as other pieces of lost local history. Photos are courtesy of Bredenberg's website and research.