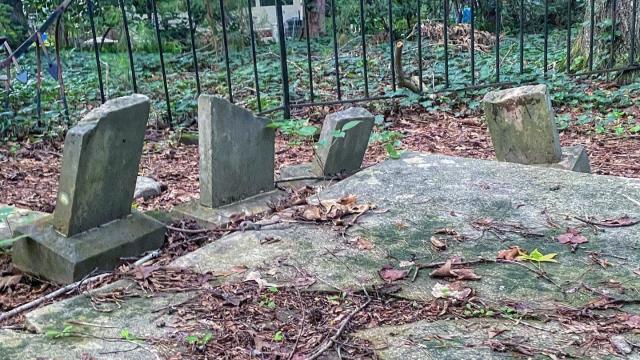 Cary, N.C. — Many people who've lived in this major Cary development for decades had no idea a tiny graveyard was tucked away off the main neighborhood road. The cemetery dates back to the mid-1800s, with broken headstones and faded engravings, has been here far longer than the neighborhoods around Kildaire Farms, Scottish Hills or Maynard – hearkening back to a time when Kildaire and Maynard were farms, not just street names.

The dirt path and rickety wooden steps leading up to the rusted iron gate are nearly invisible to passersby. Many of the headstones are broken in half, with one larger sheet of stone cracked right down the middle. The larger stone plaque is surrounded by multiple smaller graves – possibly belonging to children. But the dates and names on many of the stones have been erased by time, meaning the history buried here is in danger of becoming lost to the ages.

Small, hidden cemeteries like this aren't unusual in the Triangle. One shopping center in downtown Cary has a few graves built right into the parking lot. The White Plains Cemetery, the oldest historic resource in Cary, is also tucked away in a neighborhood. You might be surprised how many secret graveyards you can find if you know where to look.

But those small, hidden cemeteries often have the most elusive history. However, there are a few clues.

Clues on the headstones

The few historians who know about this cemetery recognize it as the Lewis Family Cemetery.

The collection of graves originated in the 1800s. During that time, the land was likely very close by to the Kildaire Farm or Maynard Farm property line.

In the 1970s, the nearby area was developed into the Kildaire Farms neighborhood, which was the first Planned Unit Development in Cary.

When it was surveyed in 2001 by Shirley Olson, she wrote, "The cemetery is in very bad condition, neglected and vandalized. It is surrounded by a wrought iron fence, the gate has been removed."

Uncovering the stories behind the people buried here is far trickier than uncovering the history buried in a larger church cemetery, where records would often be attached to the church.

Since so many of the names and dates have been erased by time, there's not much to go on. 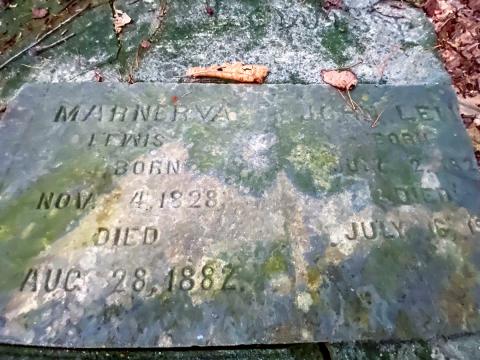 1. Marnerva Lewis, whose birth in 1828 provides a good context for how old the cemetery is. She died in 1882, according to the headstone.

2. John Lewis, who is buried beside her. Part of his information has been obscured.

All other graves are much smaller and could be children’s graves. One smaller grave holds a very faded quote: "Suffer little children to come unto me.” 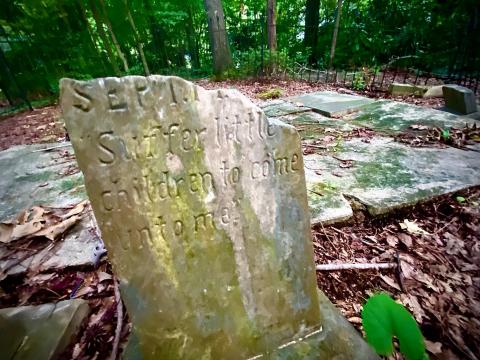 Through researching these names, we found Marnerva and John had several children throughout the years.

Their first recorded child was Hellen Lewis, who was only 4 years old during the 1860 census. Sadly, we never hear about little Hellen again in any future records. Is it possible Hellen Lewis is one of those smaller, broken graves that say "Suffer little children come unto me"?

Nancy eventually marries Thomas Maynard. Her new last name provides more context into how close the Lewis Family likely lived to the major Maynard Farm – and that's a place that has enough history to help provide context for the time period during which the people buried here lived. 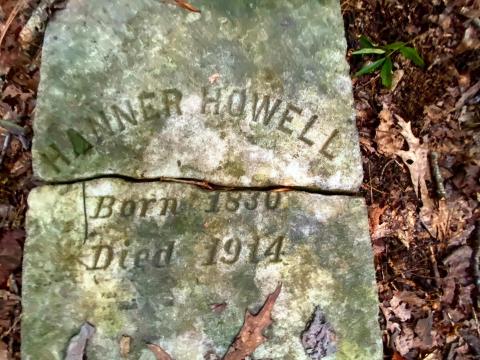 The Maynard homestead once stood on Walnut Street, where the State Employee Credit Union is now, according to Cary author and oral historian Peggy Van Scoyoc. According to her writing, Maynard owned all the land where the shopping center and the high school are and backed up to Kildaire Farm and beyond.

Even today, Maynard Road runs within a quarter-mile or less of the Lewis Family cemetery – it's very possible the Lewis family were neighbors.

Nancy Helen Lewis Maynard married Thomas Maynard on January 6, 1890, according to old records. Following her life, we discover that 17 years after marrying Maynard, she entered Dorothea Dix hospital in around 1907. She was buried in Dorothea Dix's cemetery, after being diagnosed with dementia and dying at the age of 68 in 1923.

Some records show a Thomas Maynard buried in Good Hope Baptist Cemetery in Wake County, and it's possible he was the same man who married Nancy Lewis. If so, records show he was born 1856 and died 1918.

Who visits the Lewis Cemetery today?

Most Cary historians and Kildaire Farm or Scottish Hills residents said they were not aware of the antique cemetery tucked away off the main road.

Some locals recalled spending time in the little cemetery when they were children in the 1970s, when the development was still new. One resident said he remembered when the iron fence was put up around the cemetery.

A tenderly-placed shell on a headstone shows at some point a visitor came to pay respects; however, that shell was seen as long ago as 2015, so it likely wasn't a recent visitor.

The fate of many small cemeteries like this often rests on the shoulders of surviving family members, or on the work of local historic groups or volunteer organizations that partner to help maintain the cemetery grounds. You'd be surprised how many times you drive past a piece of history – past dozens of buried stories – and never even realize it. It's important to work and make sure these stories are never forgotten.

Explore the remains of the Lewis Family cemetery on FB Live