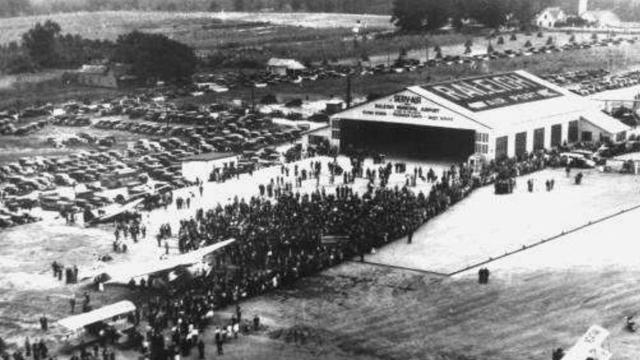 Raleigh, N.C. — If you live in the picturesque neighborhoods running down U.S Highway 70 and Tryon Road, you may find it hard to believe the remains of Raleigh's first air transportation hub can still be seen in the landscape.

Many people have no idea that the iconic pilot Amelia Earhart once flew right over that grassy field while Raleighites watched in wonder, or that those rolling fields once held a WWII air base.

For many years, people believed all remains of Raleigh Municipal Airport, which was built in 1929 as Curtiss-Wright Field and closed in 1973, had been built over, leaving no trace of its aviation history. However, careful observers began noticing that remains of at least one of its historic runways can be seen cutting across a patch of green, undeveloped land.

Several online history hunters spotted the "scar" of the runway when looking at a satellite view of the land where the airport once stood. The faint outline of the runway can be seen from above.

Upon closer investigation, patches of old asphalt can be seen peeking out from beneath the grass and flowers. Likewise, chunks of broken asphalt litter the land, looking, to the casual observer, like simple rocks. But if you know the history of this land, you'll know you're looking at solid pieces of aviation history.

Taking a closer look at the remaining runway

According to these images, the overhead view of the old airport has undergone significant changes between 1938 and 2016. 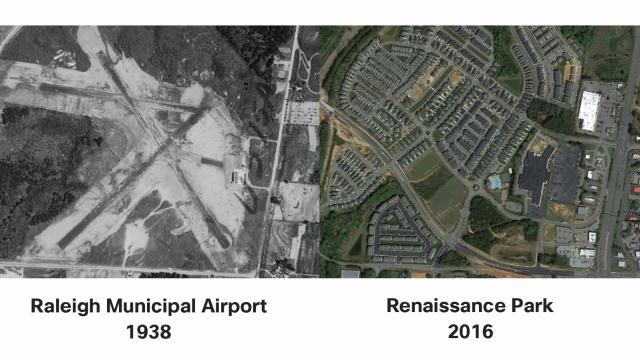 In the 1938 view, the three runways can be seen, creating an "A" shape on the airfield. It also had a hangar.

The rooftop had the word "RALEIGH" printed in large letters so pilots and passengers flying high above could see.

Bob Norton, who learned to fly at Raleigh Municipal Airport, said, "There were three runways. One in front of the hanger and two that crossed in different directions. It was built in a triangle for the prevailing winds – you’d take off and land into the wind."

This satellite view shows a closer view on the modern day area surrounding the residential development that eventually was built over Raleigh Municipal Airport. A roundabout circling a large fountain captures much of the landscape, but the scar of the runway creates a faint brown line across the green grassy field next to the fountain. 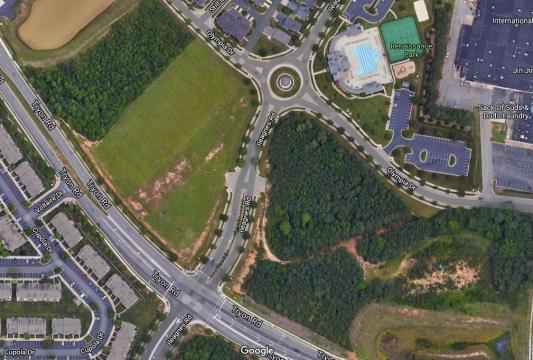 Matching up the images shows the brown line in the grass lines up with one of the original runways.

From the ground, the runway shape is even more apparent. A long patch of dirt stretches for at least 100 feet or so, almost as if a small airplane could taxi down it and take off right over the beautiful fountain. 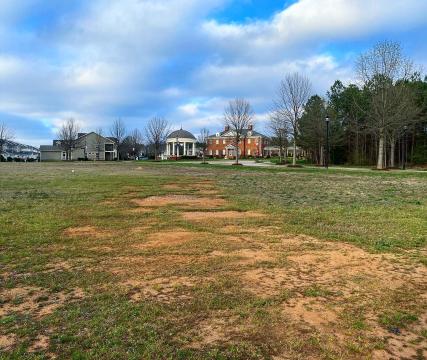 Looking even closer, patches of asphalt can be found, cracked and broken, possibly from the four-wheeling and drag racing that took place unofficially for years after the airport closed and stood abandoned. 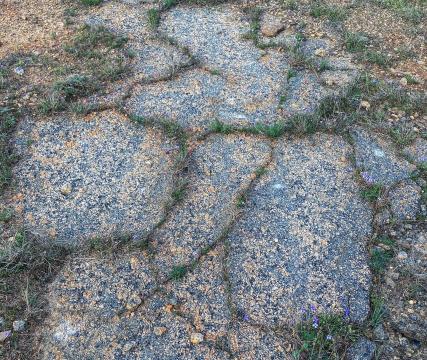 Grass and small purple flowers have pushed up through the asphalt, obscuring much of it. However, these bald patches of black asphalt appear in several places along the stretch where the runway would have been. In fact, several chunks of asphalt appear along the "crossways" line as well, possibly indicating the remains of two runways, not just one. 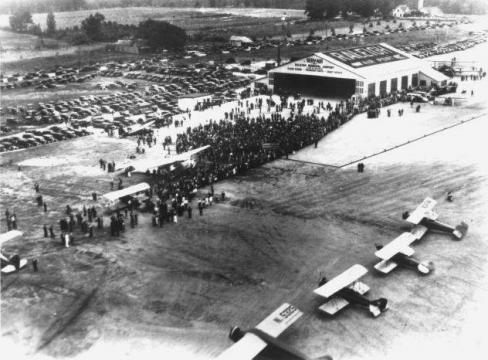 Born in Raleigh, Norton remembers Raleigh Municipal Airport as a large part of his youth in the 1960s. It was one of his first jobs, a place to bring dates for a romantic picnic while watching the airplanes take off and land, and the place he learned to fly.

After working at Finches as a curb boy, he found a job at Raleigh Municipal Airport, where he got his pilot's license.

"I worked as a line boy. I'd wash the airplanes, move airplanes out of hangers, refuel the planes. I'd fill them up and tie them down for the night," he said.

He said he used his earnings to pay for the flight school at Raleigh Municipal Airport.

Norton remembers serving pilots during a very different era in Raleigh aviation. "One old guy would stand around with a beer while I got his airplane out," he said. "There was a pile of beer cans over time because he'd throw them out against the back of the hanger."

The gruff old pilot would then take his Aeronca Champion for a quick flight over Raleigh. "He'd do loops and spins -- a little air show," said Norton.

Around 1964, Norton heard about the Civil Air Patrol, a group organized by the government to do searches for downed aircraft and missing people. "The government donated an old WWII plane to use for search and rescue. I got involved in that at the Raleigh Municipal Airport," said Norton.

When the airport was sold in the '70s, Norton said there was a collection of vintage aviation treasures still laying around the airport -- propellors, wings and even sales brochures from the '20s.

"I heard a rumor that somebody from Texas bought all the stuff in the airport, took several tractor trailer loads and shipped it somewhere. Worth a lot of money now. I wish I had taken more pictures," said Norton. 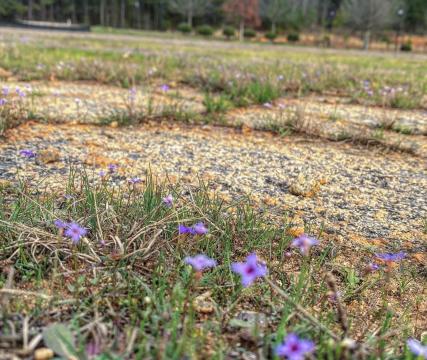 "Several famous people landed at Raleigh Municipal Airport," said Norton. "Amelia Earhart landed there and christened an airplane. Eddy Rickenbacker, the famous WWI ace, flew in there. This place was a big deal."

Rickenbacker reportedly flew a Curtiss Condor, which could hold 15 passengers and was huge for its time.

The airport saw its share of crashes, as well.

"I've heard about several crashes," Norton said. "In one, a guy took off, lost engine power and crashed into a mobile home. He walked out okay."

Norton said another pilot took off, lost control of the airplane, went across U.S. Highway 401 and flew right into the top of a big oak tree.

"You could see where the prop went into the tree. The limbs had been cut. It was the middle of nowhere at the time," said Norton.

However, the glory days of Raleigh Municipal leading the city in aviation eventually came to a close. When RDU Airport was built in the early 1940s, Raleigh Municipal lost all its commercial flights and was only used for private pilots, said Norton.

According to Raleigh fire historian Mike Legeros, "Raleigh Municipal Airport was sold to private owners after the City of Raleigh joined a land purchase for a replacement airport for passenger traffic. The city joined with Durham to buy 871 acres of land in 1941, located midway between the two cities on what would become Raleigh-Durham Airport."

After Raleigh Municipal Airport closed in 1972, a new kind of vehicle began cruising down those runways.

Drag racing at the remains of Raleigh Municipal Airport

Just as Norton remembers days of flying and working around airplanes at Raleigh Municipal Airport in the 1960s, many other Raleighites fondly recall drag racing and four-wheeling on the remains of the airfield in the 1970s.

"Teens would go to the airport with their four-wheel drive vehicles and drive around and party," Carmen Crompton Zepp said. "I only have memories of scrubby brush and lots of dirt. By that time, many teens were not aware of the full history of the abandoned airfields. We knew it had been an airport -- but if there were leftover signs of the runways, they weren’t evident through the growth and mud." 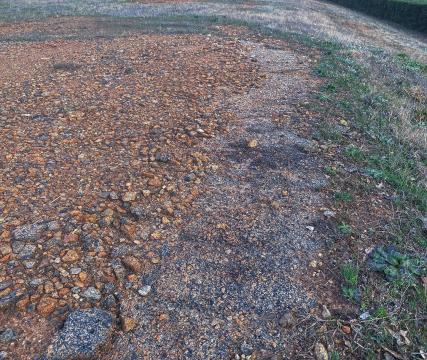 Similar to 'The Mounds,' 'Thrill Hill,' 'Mini City,' or other popular Raleigh areas for drag-racing, the remains of the airport were an unofficial hangout for fast cars and four-wheeling.

According to Zepp, people went out there fairly often to party.

"It was a great place to get away from the 'rents and the police, too, I suppose," she said. "They never patrolled out there, so the odds of getting caught doing crazy things in your vehicle, while also drinking alcohol and making otherwise questionable choices, were slim."

She, like so many others, said she had no idea any of the runways still remained.

Today, the only remains seem to be a green patch of undeveloped land between a few bustling neighborhoods. There are no more planes or cars, but there are still objects taking flight: Frisbees.

People are regularly seen playing fetch with dogs in the grassy field. Like Norton, people are still making happy youthful memories on the airfield's remains. Like Zepp, they mostly have no idea they are walking on a piece of Raleigh aviation history.

From now on, maybe they will.

Want to explore with me? Here's the live stream of the exploration, complete with interactive comments from followers, who often help guide my adventures!