Hidden History: A peek at the secrets inside Raleigh's Giant Acorn

Raleigh, N.C. — Raleigh's giant metal acorn statue is the source of many legends and tall tales.

The metal acorn is the highlight of the annual First Night Raleigh New Year's Eve celebration. It is dropped twice (once at 7 p.m. and again at midnight) to celebrate the beginning of a new year.

First Night Raleigh is on despite record COVID-19 cases. Here's everything you need to know

Some folks say the acorn will someday summon a giant metal squirrel.

Others say the acorn is full of candy.

There is one tall tale, however, that we know is true: The acorn's artist can create one of the best darn lattes in the whole City of Oaks.

And there is a time capsule etched inside its copper walls. 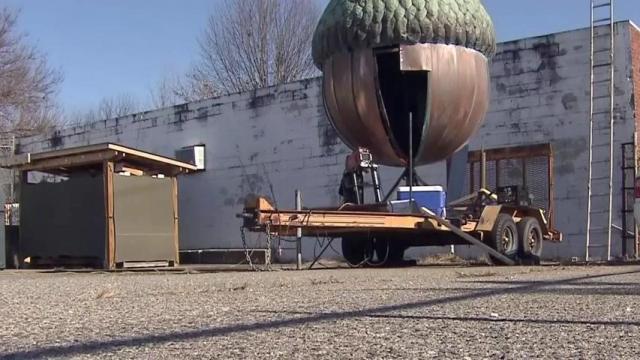 Lattes and sculptures: The artist behind the acorn

Many regulars at The Third Place coffee shop on Glenwood Avenue are surprised to hear that the owner of this popular local establishment is also the artist behind the iconic Giant Acorn that Raleigh drops at the end of each year.

David Benson, who has seen decades of Raleigh's growth and change, is a man of many talents.

Long before creating a giant, legendary acorn, he started with something smaller: Crafting silver and metal jewelry, while running a jewelry store above the iconic DJs Bookstore on Hillsborough Street.

With a true artist's spirit of whimsy, he just picked up a bunch of materials and started soldering.

Over time, as he made a name for himself, he got a studio at Artspace, making jewelry and sculptures. "One day," he said, "John Watkins walked into my studio and asked if I could make an acorn. I said sure, how big? He said, I dunno! A big one!"

That was almost 30 years ago, during Raleigh's 200th anniversary.

The acorn is far from Benson's only claim to fame. You've probably seen his art in other hot spots, never even realizing the artist was one-in-the-same.

For the NC Museum of Art's 50th Anniversary, he hung delicate scrim all inside the old building, which took on an artful, transluscent appearance with lights shooting down on it. He also created some fish sculptures for Rex Hospital, and a sculpture called 'Scaled Up' for Glaxo. He also did work for the Winston-Salem Journal, and a lot of the work hanging inside Margaux's Restaurant. 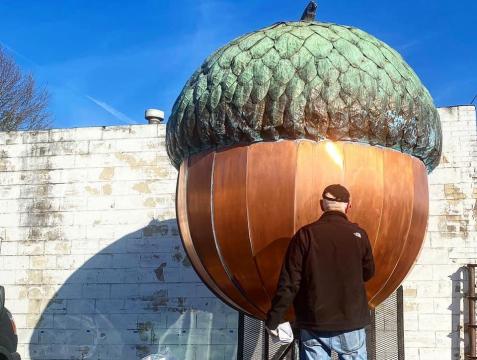 As a coffee shop owner, his art and passion for community-building takes a new form. He took over The Third Place in 2004, and since then he's hosted many local artists on the shop's walls. In 2015 he combined forces with JJ Johnston to create a BLT + LGBT bagel sandwich for equality.

When asked how he found all of these opportunities and created so many huge sculptures after starting with just one small silver ring, he said, "You just get started, and you can't control yourself." 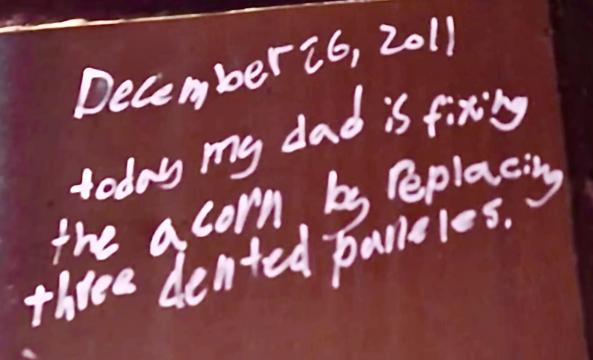 A peek inside the acorn: There is actually a time capsule inside

The idea of the New Year's Acorn having a time capsule inside was originally meant as a joke – just another tall tale for the Giant Acorn.

However, Benson laughingly said, "Actually, I guess you could say there really is a time capsule inside."

"I think I left an old Coca-Cola can from 1991 inside there and forgot all about it," he said teasingly. "But there actually are some old notes written on the walls in there as well."

While the acorn itself is symbolic of the turning of the years in Raleigh, the inside of the acorn holds a little piece of history itself.

in 2011, Benson's daughter crawled inside the acorn – a rare glimpse inside the hallowed space. She scribbled drawings inside the walls, and a message for future generations, to mark a historic moment in the acorn's life.

"December 26, 2011. Today my dad is fixing the acorn by replacing three dented panels." 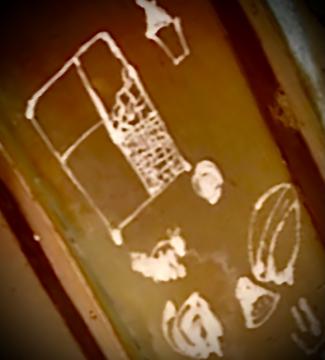 The message is accompanied by drawings in white paint – precious family memories, and perhaps glyphs over which historians in Raleigh circa 3020 will muse.