Here's why Bernie Sanders is taking on MLB 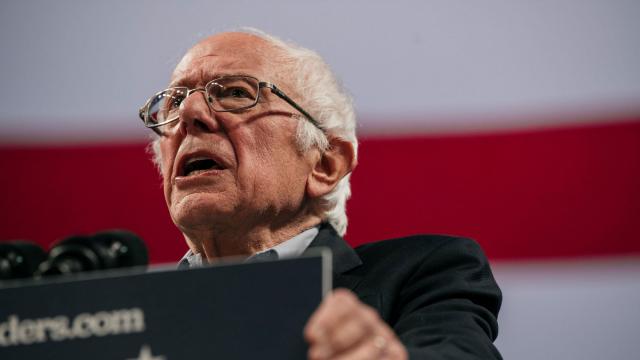 CNN — Sen. Bernie Sanders has added a target on his growing list of one percenters and large corporations: Major League Baseball.

Since MLB stated its intention to eliminate 42 of its 160 minor league teams, Sanders -- assigning himself with the responsibility of protecting those teams and advocating on their behalf -- has taken the billion dollar organization to task. He's met with MLB Commissioner Rob Manfred, sent repeated letters to the organization voicing his concerns as negotiations proceed, and recently held a news conference and batting practice with the three minor league teams in Iowa at risk of being cut.

For Sanders, this type of dispute is familiar. This is about a for-profit operation run by millionaire and billionaire owners.

"The metaphor is very clear for Bernie Sanders as he's walking into that room," Sanders campaign manager Faiz Shakir told CNN, reflecting on the image of Sanders entering his meeting with Manfred. "This is a reflection of American society. Those who have it all are trying to maintain having it all and want even more. Those who don't already have a lot are being squeezed to pay more for those who already have too much."

In Reno, Nevada, earlier this month, Sanders used the recently signed salary of a MLB player to underscore income and wealth inequality and to call for a realignment of societal values, two observations that live at the heart of Sanders' belief system.

"I was just reading a little while ago I think some pitcher for the Washington Nationals signed a seven-year contract for $270 million," Sanders said on December 9, referencing the recent contract signed by Stephen Strasburg. "Well, if we can pay pitchers and football players and basketball players tens of millions of dollars a year, we can pay every teacher in this country at least $60,000 a year."

He noted that the minor league issue is also personal for him. As mayor of Burlington in the 1980s, Sanders helped bring a minor league team, the Vermont Lake Monsters, to his own city.

"What was most important to me as the mayor of the city at the time, is seeing what minor league baseball did for our community, and it was a beautiful, beautiful thing," he said.

He continued: "My memories are that kids would come out with their moms and their dads ... a working class family could come out to the game, you get a few hot dogs and you enjoy the day. And my memories are of the ballplayers who were very gracious signing the autographs for the kids and kids being excited, and the nature of the field was everybody had a good seat. And people could observe the games."

Eric Oas, former director of broadcast and media relations for the Clinton LumberKings, one of the teams at risk of being cut, said he was drawn to Sanders and his politics because of the "sort of a sense of solidarity."

It's "the idea that I'll fight for you, I'll advocate for you even if it doesn't necessarily affect me," said Oas, who is a current field organizer for the Sanders campaign.

That idea was buoyed by Sanders encouraging others to speak for themselves about how deeply minor league baseball teams were woven into their communities.

"This team means the world to me," said Kim Parker, general manager of the Burlington Bees, another Iowa based minor league team at risk.

Although Sanders has amplified the issue, the underlying tensions between MLB and its minor league teams are not new.

Starting salaries for a minor league player range between $1,160 and $2,150 a month depending on the level they are playing, according to MLB paperwork.

In 2014, a group of minor league baseball players filed a lawsuit against major league teams for not paying them a living wage.

Garret Broshuis, a former professional baseball player, and lead attorney on the case, Senne v. Office of the Commissioner of Baseball, outlined the argument put forth by his plaintiffs.

"It's the major league teams that pay the salaries. And right now, most players are making less than $7,500 for the entire year," Broshuis told CNN. "We're talking about an industry that had over a billion dollars not in revenue but in profits this year. So, they can afford to give a raise to these players."

In response to the federal class-action lawsuit, MLB has since successfully lobbied Congress to pass Save America's Pastime Act, which was included in the 2018 spending bill. It created a new statutory exemption that allowed the organization to not have to adhere to the Fair Labor Standards Act and not pay minor league players a living wage.

In the midst of the back and forth over the fate of the minor leagues, MLB Commissioner Robert Manfred has acknowledged the significance of those teams.

"MLB fully recognizes the importance of professional baseball to communities throughout the United States without a Major League team and, as our national pastime, appreciates the support of the tens of millions of fans in our country," Manfred wrote in a statement.

Sanders told reporters that Manfred "indicated" in their meeting "that he wanted to sit down with minor leagues and work out issues that they have," but believes MLB's position is a retaliation from the class action lawsuit and minor league players desire to be paid a living wage.

"I think there is a lot Congress can do to protect baseball for ordinary Americans, I think that is what you're going to see being done by a bipartisan manner," Sanders told reporters. He listed MLB's exemption from anti-trust law, and being the beneficiary of hundreds of millions of dollars in tax payer corporate welfare to help build their facilities, as two ways the government can apply pressure.

Sanders is not the only member of Congress to raise awareness on this issue. Earlier this month, others created the Save Minor League Baseball task force, a bipartisan committee aimed at monitoring and addressing the issue.

But Sanders' work in particular has not gone unnoticed.

"We need a politician like him with clout in order to make baseball think differently" Ray Gimenez, a former minor league baseball player and current pastor from Clinton, Iowa, told CNN. "We need to completely destroy the mindset baseball has right now because this is an American dream in many people's lives."

Since Sanders first met with Manfred earlier in December, negotiations have intensified as MLB has threatened to walk away from the minor leagues entirely.

"I'm outraged to hear of your threat to eliminate the entire existing Minor League Baseball system," Sanders wrote in a statement earlier this month. "When we last met, you gave me your word that you would be negotiating in good faith with Minor League Baseball to preserve professional baseball in the communities that currently have it. Threatening to walk away from the entire minor league system is the exact opposite of negotiating in good faith."

At the end of the day, the negotiations aren't a typical business deal to Sanders.