Here's who qualified for the September debates 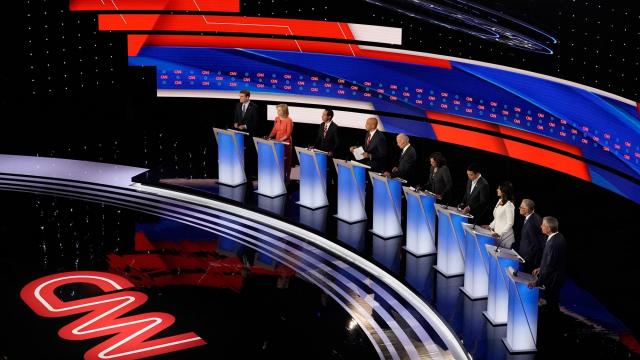 CNN — The third round of Democratic primary debates, hosted by ABC and Univision, will take on September 12.

Presidential candidates had until late August to reach polling and grassroots fundraising thresholds set by the Democratic National Committee, who announced its official list of who made the debates on Thursday.

Candidates needed contributions from at least 130,000 individuals, coming from at least 400 unique donors in 20 or more states. They also needed to reach 2% in at least four DNC-approved polls.

10 candidates met both thresholds, qualifying them for the debate scheduled for next month:

There were three other Democrats -- Rep. Tulsi Gabbard of Hawaii, billionaire Tom Steyer and author Marianne Williamson -- who said they had met the fundraising threshold, but won't be on stage in the September because they but didn't hit the polling minimum to qualify. Steyer had three of his four necessary polls, Gabbard had two and Williamson had one.

The remaining candidates in the Democratic field didn't reach above 2% in any qualifying polls.

The DNC required that all polls be conducted by an approved pollster, released between June 28 and August 28, 2019, conducted nationally or in Iowa, New Hampshire, South Carolina and/or Nevada, and fit a certain question structure.

The candidate needed above 2% support in four or more polls of this nature, and they couldn't have been conducted by the same pollster in the same region.

The next goal for candidates will be the October debate, the dates of which have not yet been announced. The polling qualifying period for those debates stretches for a longer amount of time -- from June until two weeks before the debates -- making it possible for candidates who did not make the September debate stage to appear in October.