Here's how long it's taken to confirm past Supreme Court justices 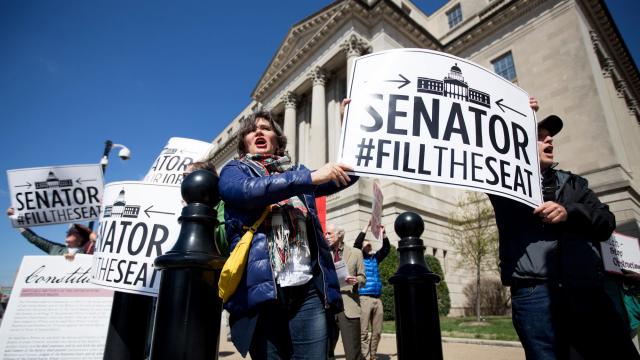 CNN — Ruth Bader Ginsburg's death has opened up a political battle over the future of the Supreme Court and who will fill her now-vacant seat as Election Day looms.

After the court announced Ginsburg's passing, Senate Majority Leader Mitch McConnell said President Donald Trump's nominee "will receive a vote on the floor of the United States Senate." And Trump on Saturday said that Republicans have an "obligation" to fill the vacancy on the high court "without delay."

The vacancy on the bench creates what many conservatives view as a once-in-a-generation opportunity to move the makeup of the court from its current split of five conservative justices and four liberal justices to a more dominant 6-3 majority.

But Democrats, including former President Barack Obama, have called on Republicans to uphold the precedent set in 2016 when they refused to fill the Supreme Court vacancy created by the death of Justice Antonin Scalia, even though Obama had nominated Merrick Garland for the seat in March of that year -- months before the presidential election.

Senate Republicans only need a simple majority of 51 votes to confirm a new justice once one is formally nominated and there are 53 GOP senators currently, meaning McConnell can only afford to lose three Republicans. Conservatives are pushing the Senate leader behind the scenes to consider moving to fill the seat before November 3, potentially leaving the conference divided over what timeline is best.

Here's a look at how long it has taken to confirm past Supreme Court justices:

(Note: Roberts was nominated twice by Bush but in immediate succession. The first was to replace Sandra Day O'Connor, but upon the death of William Rehnquist, his initial nomination was withdrawn and resubmitted as a nomination for Chief Justice. There are 23 days between his second nomination on September 6 and his confirmation.)