Will Hillary Clinton run for president again in 2020? 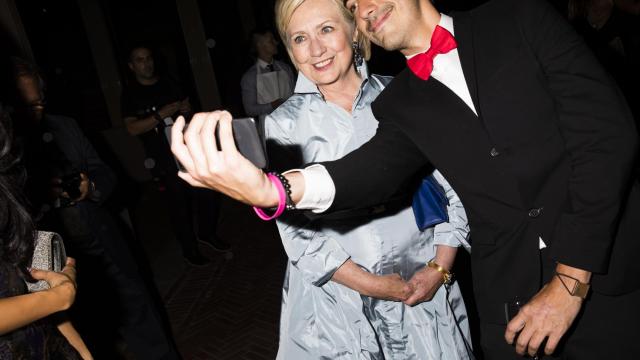 (CNN) — On Sunday, two former advisers to Hillary Clinton made a bold claim in a Wall Street Journal op-ed. Here it is:

"Get ready for Hillary Clinton 4.0. More than 30 years in the making, this new version of Mrs. Clinton, when she runs for president in 2020, will come full circle—back to the universal-health-care-promoting progressive firebrand of 1994. True to her name, Mrs. Clinton will fight this out until the last dog dies. She won't let a little thing like two stunning defeats stand in the way of her claim to the White House."

And, before you pull a muscle from rolling your eyes too hard (this is a real injury!), consider what Clinton told Recode's Kara Swisher last month about another run for the nation's top office:

"Well I'd like to be president. I think, hopefully, when we have a Democrat in the Oval Office in January of 2021, there's going to be so much work to be done. I mean we have confused everybody in the world, including ourselves. We have confused our friends and our enemies. They have no idea what the United States stands for, what we're likely to do, what we think is important, so the work would be work that I feel very well prepared for having been at the Senate for eight years, having been a diplomat in the State Department, and it's just going to be a lot of heavy lifting."

In case you are keeping track at home, that isn't a "no." Or even close to one.

You can understand why Clinton wouldn't want to totally rule out another bid. Buyer's remorse from voters who helped elect Donald Trump in 2016. The backing of an energized female base within the Democratic Party. Plus, if Joe Biden (75 years old) and Bernie Sanders (77) can run again for president, why can't she?

True enough! But here's the thing: Democrats should be rooting VERY hard against another presidential run by Clinton. That is, if they want to beat Donald Trump in 2020.

As you may remember, Clinton lost the 2016 presidential race to Trump. You might have missed it, it wasn't that big a story.

She lost that race despite these facts:

She was seeking to follow a popular Democratic president in office.She drastically outraised and outspent Trump in all key battleground states.A tape emerged just weeks before the end of the race where Trump made a laundry list of misogynistic comments.Her opponent was Donald Trump.

Yes, there were mitigating factors -- most notably James Comey's decision to announce that he was re-opening the FBI investigation into her use of a private email server just days before the election. And WikiLeaks' strategic release of hacked emails from the Democratic National Committee designed to embarrass the Clinton team and distract them from the task at hand.

BUT, but, but. The 2016 race was still a VERY winnable one for Clinton -- and one that most experts, polls and people expected her to win, and win easily.

And then she lost.

In the end, people voted for Trump -- and, yes, Clinton won the popular vote by almost 3 million -- because they wanted RADICAL change. And he was that change. Clinton was, well, more of the same.

Here's a number that tells the story of that election: Almost 4 in 10 voters said that the most important thing about a candidate for them was that he or she could bring about needed change in the country. Trump got 82% of the vote among that group. Clinton got 14%.

Now, ask yourself this: What's changed? I'll answer that one for you: Not a hell of a lot.

If anything, Clinton is in a worse position, politically speaking, than she was back then. According to Gallup polling in September, just 36% of people have a favorable view of Hillary Clinton. That's down 7 points from where it stood just before the 2016 election and is tied for her lowest favorable rating ever in Gallup polling.

Why? Who knows? Some of the low regard in which Clinton is held is tied to the devastating efficacy of Trump's "Crooked Hillary" attacks. Some likely has to do with her decision to remain a vocal and high-profile critic of the president after losing. Some -- much? -- of it has to do with the fact that negative feelings about Clinton are baked into the electorate and just will never change.

That deep-seated negative opinion about Clinton is at the center of why she would be a very poor choice for Democrats in 2020. Clinton's many years in the public eye -- and the many questions raised about her time in public life -- allowed Trump to make the election a referendum on her and her baggage rather than on him and his own deep flaws as a person and a politician.

Which, interestingly enough, Penn and Stein acknowledge right at the start of their piece arguing that Clinton will run and win in 2020. The very fact that there can be a "Clinton 4.0" suggests she may have a) been around national politics too long and/or b) changed shape as a politician too many times over that multiple decade run in the public eye.

With a field packed with fresh faces -- including California Sen. Kamala Harris, who is the new No. 1 in our 2020 rankings -- the case to give Clinton a third (or fourth) bite at the apple is a tough sell.

And, remember this: Beating Trump is harder than it might look from the outside. For all of his abnormalities in office, he has demonstrated an ability to rally the Republican base like few GOP politicians before him. And he will do absolutely anything -- literally -- to win.

Democrats would do well to try a different approach than Clinton used in 2016, which, when boiled down, amounted to this: I'm running against Donald Trump, and you're certainly not going to vote for him, are you?

And they'd be well served to try a different candidate to deliver that different message -- not someone who was rejected by voters in the last presidential election even though she was running against the weakest Republican nominee in modern memory.

The third time is rarely the charm in presidential politics. Especially when you're talking about a candidate as divisive as Hillary Clinton.