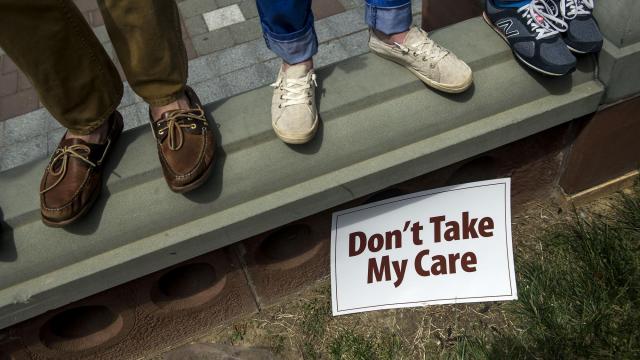 The Affordable Care Act has survived numerous court battles and repeal efforts, but a new case is threatening the law’s future once again. A federal judge in Fort Worth, Texas, will hear arguments Wednesday on whether to grant a preliminary injunction that would suspend the health law until the case is decided. He has also indicated that he might go straight to ruling on the merits of the case.

It focuses on whether the law’s requirement that most Americans have health insurance is unconstitutional, but has much broader implications. The Justice Department made a highly unusual decision this summer: Though it disagreed with the plaintiffs that the entire law should be struck down, it decided not to defend the individual mandate or several other central provisions, including protections for people with pre-existing conditions. That prompted a coalition of 16 states and the District of Columbia, led by California, to intervene to defend the law, saying that to pause it or invalidate key components would threaten the health care of millions of people.

Presiding over the case is Judge Reed O’Connor of the U.S. District Court for the Northern District of Texas, who was appointed by President George W. Bush. The judge has previously blocked Obama-era efforts to extend medical leave protections to same-sex couples and to include gender-identity discrimination as a form of sex discrimination under the health law.

Who brought this latest case and why?

The case is being brought by a group of 20 Republican state attorneys general and the governors of Maine and Mississippi. They argue that the law is unconstitutional and should be struck down.

The reason, they say, is that in 2012 the Supreme Court upheld the health law based on Congress’ taxation power. Congress, the court said, could impose a tax penalty on people who did not have health insurance.

But Congress enacted a tax bill in December, 2017 that zeroed out that tax penalty. The plaintiffs argue that the health law’s requirement that most people have insurance — the so-called individual mandate — no longer functions as a tax, and therefore is unconstitutional.

That leads to a central question in the case: Does tugging at the individual mandate unravel the entire health law, including popular provisions like its protections for people with pre-existing medical conditions? The plaintiffs argue that if the mandate is unconstitutional, it cannot be severed from the law’s other requirements. If the mandate falls, they say, so must the entire law.

Who are the defendants?

Technically, the federal government is the defendant — the case is called Texas v. United States. But in June, the Trump administration sided with the plaintiffs on the individual mandate, arguing in a brief that it and the pre-existing conditions protections were unconstitutional. The administration did not challenge certain other parts of the law, however, like the establishment of health insurance marketplaces and premium subsidies for low- and moderate-income people which, it said, could continue without the mandate.

The administration has asked O’Connor for “summary judgment” — in effect to rule immediately on the constitutionality of the individual mandate and other issues, instead of granting a preliminary injunction.

Is anything at stake for people who don’t get insurance through the Affordable Care Act marketplaces?

Yes, there’s a lot on the line for people covered through their employers, as well as those insured through the law. If the court finds that the individual mandate is no longer constitutional and as a result, the entire Affordable Care Act must fall, about 17 million Americans would lose their health insurance, according to the Urban Institute, a left-leaning think tank. That includes millions who gained coverage through the law’s expansion of Medicaid and as well as the millions more who get subsidized private insurance through the law’s marketplace. Insurers would also no longer have to cover young adults up to age 26 under their parents’ plans. Annual and lifetime limits on coverage would once again be permitted, and there would be no cap on out-of-pocket costs.

If the court sides with the Justice Department and strikes down only the mandate and the law’s popular protections for people with pre-existing conditions, insurers could return to denying coverage to such people or charging them more. They could also return to charging people more based on their age, gender or profession. The Kaiser Family Foundation, a nonpartisan research organization, estimates that 52 million adults 18-64, or 27 percent of that population, would be rejected for coverage under the practices that were in effect in most states before the Affordable Care Act.

If the judge finds the law unconstitutional, is there any other way to preserve protections for people with pre-existing conditions?

A group of 10 Republican senators pre-emptively introduced legislation last month, but it would only partially restore the provisions in question. It would prohibit insurance companies from denying coverage or charging more for it based on someone’s health status. But the catch is that insurers could still refuse to cover certain medical conditions. They could also again charge more based on gender or line of work, or raise rates on older Americans.

After the judge rules, what happens next?

The losing side would almost certainly appeal, and that process could take years. Eventually, the case could land before the U.S. Supreme Court. Confirmation hearings on Judge Brett Kavanaugh, the Trump administration’s nominee for an open seat on that court, began Tuesday and will continue Wednesday as the oral arguments in this case get underway.