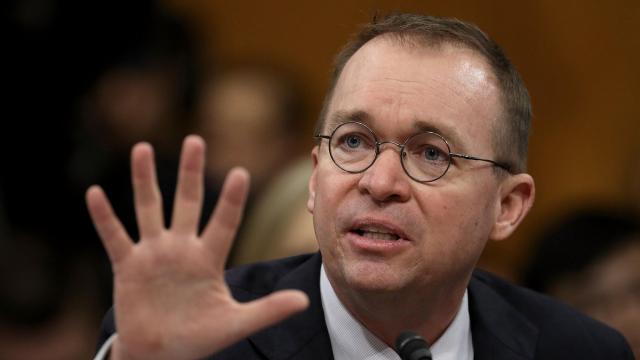 (CNN) — Less than two years ago, Mick Mulvaney repeatedly attacked then candidate Donald Trump as a "terrible human being" whose actions before running for president would disqualify him for office in an "ordinary universe."

Today, Mulvaney is set to be Trump's acting chief of staff -- and one of the fastest risers within an administration defined far more by the remarkable number of people who have left it.

The arc of Mulvaney from a hold-my-nose-and-vote-for-the-bad-guy-because-he-is-a-Republican-and-anyone-is-better-than-Hillary-Clinton Trump backer to literally Trump's top guy in Washington is about much more than just how one ambitious former lawmaker, um, adjusted, his principles to succeed in the Trump White House.

It's about how the entire Republican Party -- or at least the vast majority of it -- watched in horror as Trump conducted a hostile takeover of the GOP and then, once he became president, tried to pretend that not only had they been with Trump all along, but that his election was entirely consistent with their long-held conservative principles.

None of that is borne out by the facts, of course, but it is the story that establishment Republicans have been telling themselves for the better part of the last two years -- a sort of survival mechanism aimed at coping with the fact that the man who currently runs their party and their country isn't someone any of them would have chosen to be in such a prominent position.

Mulvaney -- and his transition from Trump critic to Trump guy -- is a useful window through which to peer to understand just how far the Republican Party has come over the last few years.

Elected in 2010 to a solidly GOP seat in South Carolina as part of the tea party revolution that delivered Republicans control of the House, Mulvaney spent his near-decade in Congress focused on things like limiting what he believed to be out-of-control government spending. In 2011, he was part of the tea party group that refused to raise the debt limit unless then President Barack Obama agreed to significant budget cuts. (The result was sequestration.) Mulvaney was, again, one of the hard-liners demanding significant spending cuts in order to keep the government open in 2013. (The government shut down for 16 days.) Mulvaney was one of the founding members of the Freedom Caucus, the small but influential group of Republican lawmakers united by the idea that party leadership was simply not committed enough to conservative-first principles.

Mulvaney wasn't -- as is obvious by that political resume -- a favorite of the GOP establishment with whom he often clashed. But neither was he the pariah that some other colleagues -- Ohio's Jim Jordan, for example -- were. As Michael Grunwald notes in his terrific Mulvaney profile for Politico Magazine, the South Carolina congressman was friendly with House Republican leaders Rep. Paul Ryan and Rep. Kevin McCarthy; "Mick sometimes brought those Freedom Caucus guys back to reality," his former chief of staff told Grunwald.

"There's no way for me to avoid that the establishment wing of our party has lost its way. They don't have any idea the damage they're doing to the Republican Party. I called up Rand and said, I've had enough. We're either going to figure out how to save this party or the establishment is going to drive it to irrelevance."

And then Donald Trump happened.

At first, Mulvaney, like the rest of the Republican Party, didn't take Trump seriously. He told The Hill newspaper in June 2015 that he had a "very difficult time taking [Trump] seriously," adding: "If he is going to have the impact of kicking a serious candidate off the dais for the first debate, I hope he takes it just as seriously as the person he kicks off."

Once Trump became the nominee, Mulvaney, like the rest of the Republican Party, sort of threw his hands up; he didn't like it, he didn't support Trump but, hey, this was who Republican voters wanted and anyone had to be better than Clinton.

"Should either of these people be, be a role model for my 16-year-old triplets? No," Mulvaney said on a South Carolina talk radio show in October 2016, CNN's KFile reported. "In an ordinary universe, would both of these people's past activities disqualify them for serving for office? Yes. But that's not the world we live in today. The world we live in today, it's either him or her and for me that's still an easy choice."

The path from that statement to Mulvaney's current position -- and praise of Trump as a shock to the political system -- is literally unfathomable, especially when you consider that Trump has moderated or modulated a total of roughly zero of his positions since being elected president. Most notably given Mulvaney's long-held concern for the rising national debt, Trump shows little concern or care for finding ways to pay for things like his $5 billion ask to build a border wall -- relying instead on the government's ability to borrow against itself.

"It's gotta be tough to carry water for a president who doesn't believe what Mick believes," South Carolina Rep. Jeff Duncan (R) told Grunwald of Mulvaney.

No kidding. But, Mulvaney isn't alone. Far from it. He is simply one of the most successful examples of a Republican who has fully capitulated to Trump's view of what the Republican Party stands for -- a view that runs almost directly counter to where the GOP stood on domestic and foreign policy when Mulvaney was elected to Congress just 8 years ago.

Mulvaney and his fellow Republicans almost certainly justify that capitulation by noting that Trump won fair and square and that the President represents where the party wants to be. But, there's a big difference between believing in things because they work or are politically easy and believing in things because you think they are the right path forward for the country.

Mulvaney's past comments about Trump aren't flippant remarks made about a man with whom he wasn't well acquainted. They were reactions to a person who was offering a brand of conservatism to which Mulvaney -- and the bulk of the GOP leadership -- was entirely opposed.

That they have spent the last two years trying to pretend as though Trump is one of them and represents anything close to what many of them have spent their life fighting for is a testament to the human mind's ability to justify anything.