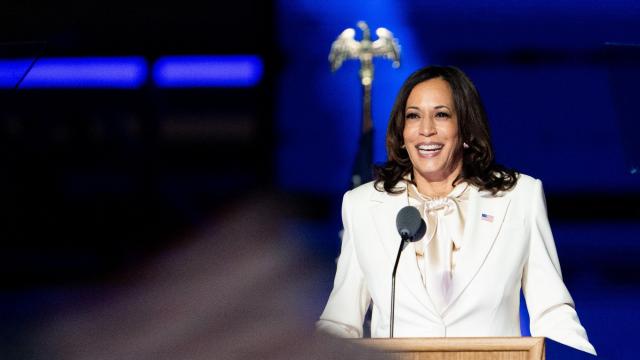 CNN — Michelle Arrington was on a plane headed to a beach reunion with her Alpha Kappa Alpha Sorority sisters Saturday when American history happened.

The Atlanta lawyer said she switched on her cellphone when she landed in Richmond, Virginia, saw a stream of 72 messages and "I thought 'it has to be it.' "

The celebrations began at baggage claim -- where Arrington and fellow sorority sister Valyncia Saunders broke into song. It hasn't stopped since.

Harris' victory is particularly resonant for Arrington, Saunders and the group of friends gathering at a beach house in the Outer Banks of North Carolina this week. They all attended Howard University, graduating more than a dozen years after Harris did in 1986. And they all have followed and supported her political career -- from her ascension as the first woman to serve as California Attorney General, to her election as the first Black woman to represent California in the US Senate and, now, to the doorstep of the White House.

"Her story is our story," Saunders, who practices law in Richmond, said in a telephone interview Sunday. "I can't explain how fundamentally life-changing this is for every little Black and Brown girl in this country."'

Harris -- the daughter of an Indian mother and Jamaican father -- entered Howard University, one of the nation's oldest historically Black colleges and universities, after a childhood in Northern California and attending high school in Montreal, during her mother's time conducting breast cancer research at McGill University.

In a 2018 interview on The Breakfast Club syndicated radio show, Harris described Howard as crucial in shaping her identity. "What you learn at an HBCU is you do not have to fit into someone's limited perspective of what it means to be young, gifted and Black," she said.

Harris' ties to her alma mater, the sorority and the broader Divine Nine -- as the council of the nine historically Black fraternities and sororities is known -- were reaffirmed through her history-making bid for the White House. She even worked occasionally from an office at Howard in the final stretches of the campaign.

This sisterhood of AKA also made its presence felt in this election. As soon as Joe Biden selected Harris as his vice presidential nominee in August, donations in increments of $19.08 -- marking the year, 1908, that the sorority was founded at Howard -- began to hit the account of a joint fundraising committee the Biden-Harris campaign operated with the Democratic National Committee.

Arrington and other AKA sisters say this reflects a long-standing practice of the sorority celebrating its founding in ways large and small. The friends' beach reunion this week might include "a happy hour in the evening at 6:08 every day," Arrington said, laughing.

That a Black woman helped end President Donald Trump's racially divisive tenure "is the icing on the cake," said Jacqueline Brooks, another of the AKA friends gathered at the North Carolina beach house.

The day Trump was elected, Brooks said her then-teenage daughter Breanna McDonald burst into tears. "She looked at me and said, 'How could they pick him?' Because of the racism and the tension. As a mother, it broke my heart."

"But to now look up and see a Black woman as vice president, I'm able to say to her: 'Remember those tears you cried?' " said Brooks, a banker who lives in Bethesda, Maryland. "All we had to do was to keep fighting and believing that truth, honesty and dignity would prevail because that's the life we want.

"That's the world we want for our children, and that's the country we want to be."

Kamala Harris in a White Suit, Dressing for History
SUGGEST A CORRECTION