Her Son Was Careful to Avoid Police Officers. Then He Was Killed by One. 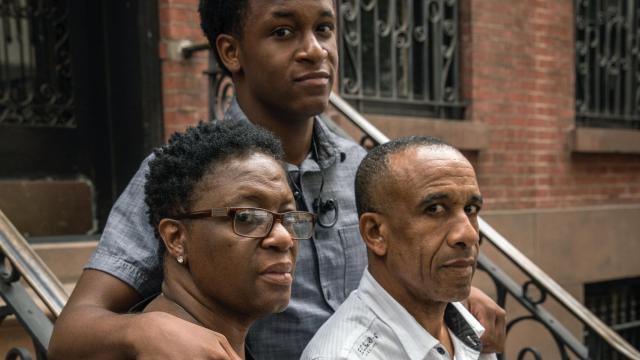 He drove the speed limit. He kept his car in good repair. Instead of shorts or T-shirts, he wore Ralph Lauren dress shirts.

For years before he was fatally shot by a Dallas police officer who says she mistook him for a burglar in his own home, Botham Shem Jean had gone out of his way to avoid even routine encounters with police, his mother, Allison Jean, said during a visit to New York City on Thursday with her lawyer, Lee Merritt.

Jean said her son had to explain life in America — where for black men in particular, a minor traffic stop can turn deadly — to his family back home on the Caribbean island of St. Lucia.

“I always told him, ‘Why do you have to be so dressy?'” Jean recalled in an interview. “He said ‘Mom, I don’t want to be stopped. I don’t want for them to think I’m somebody I’m not.'”

In 2016, when Botham Jean moved to Dallas to take an internship with the accounting firm PwC, formerly known as PricewaterhouseCoopers, he made sure to transfer his car registration within the 30-day limit.

Unlike many mothers of African-American boys, Allison Jean, who headed several government agencies on St. Lucia, never gave her son, a risk assurance associate, a talk about avoiding police.

“We are predominantly black in St. Lucia,” she said as she prepared to return to the island for her son’s burial. “I never had to face any racial issues.” But now Jean’s death is being held up as evidence that blacks in America are not safe, even in their own homes.

How much his race played a role in what happened when Amber R. Guyger, a white off-duty Dallas police officer, arrived at Jean’s door on the night of Sept. 6 is unclear, as are many of the details of what led to the shooting. Even if it was a tragic error, Allison Jean wonders if Guyger would have fired as quickly had her son not been black.

After drawing her gun and issuing verbal commands, with which Jean did not comply, the affidavit says, she fired the gun twice, striking Jean once in the torso.

On Thursday, Allison Jean suggested that Guyger had invoked the term “silhouette” to imply that she did not know Botham Jean’s race.

“She would have been able to see his complexion,” Allison Jean said. “I think the word silhouette was deliberately used to erase the racial issue.”

In another interview Thursday, a neighbor who lives on the same floor as Botham Jean said that she, too, questioned Guyger’s contention that it was too dark to see into the apartment. The neighbor, who requested anonymity because she is also a city employee, said that the lighting in the hallway is bright and illuminates the inside of the apartments when the door is open.

“Even if all the lights are off, I can see what my furniture looks like, I can see everything in the apartment,” said the neighbor, who said she heard a woman yelling in what she said sounded like “a one-sided argument'’ before gunshots went off on the night of the episode, after which she heard another voice, which she presumed was Botham Jean’s. Some of this account might comport with Guyger’s statement that she gave verbal commands.

But the neighbor said that the door could not have been ajar, as Guyger told police, according to the affidavit. “The doors are made so when you walk in they slam behind you,” she said. “They’re heavy.”

Accounts from other neighbors in local news reports have not been entirely consistent. At least one has said that Guyger could be heard pounding on the door asking to be allowed in, Merritt said, contrary to her account that she let herself in.

In the affidavit, Guyger said that after the shooting she immediately called 911. That was around 10 p.m.

Allison Jean, who spoke to her son every day, had last spoken to him the night before at 9:30, she said. That night, “I looked at my watch and I said, ‘He may be calling soon,'” she said. “When it was 10, I found it strange he didn’t call.”