Her Job Has a Ceiling, and Much More 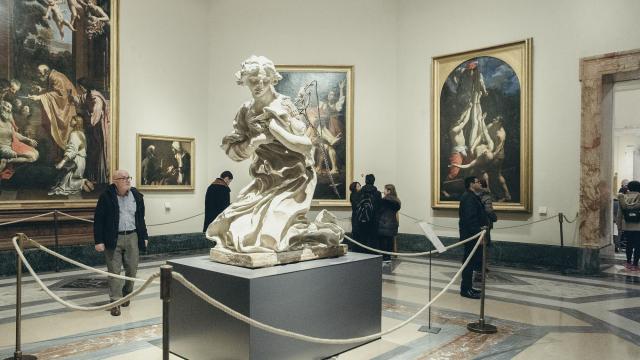 VATICAN CITY — Vatican City has been governed by men since it was established as an independent state in 1929. A year ago, however, a woman joined the upper ranks: Barbara Jatta, the first female director of the Vatican Museums.

In the 12 months since her appointment, Jatta has put her stamp on the role, resisting some of her predecessor’s initiatives and forging her own path.

Jatta was the only woman on an initial list of six candidates, and she was chosen by Pope Francis. In the post since January, she oversees some 200,000 objects and an array of museums, papal apartments, sculpture courtyards and other sites, including the Sistine Chapel.

The chapel is one of the Roman Catholic Church’s holiest places, where popes are elected. It is also packed almost daily with ever-larger crowds scrambling to gaze at Michelangelo’s famous frescoed ceiling. The Vatican Museums say visitor numbers in 2017 are expected to reach a record, significantly exceeding the 6 million that Jatta’s predecessor, Antonio Paolucci, defined as an annual upper limit.

The escalating totals pose the toughest challenge to Jatta’s directorship.

Jatta is friendly yet firm, and she expresses high ambitions for herself and for the institution. In an interview, she said that she had worked for 20 years in the Vatican Library, leading its prints department from 2010. When she heard of her nomination for the Vatican Museums role, she said, “it came as a shock at first, to face such a big change.”

Regarding her gender, Jatta said she “didn’t realize what it meant until I started the job. Whenever I attended conferences or public events, so many women would come up to me, saying: ‘We are proud, and you are also, in some way, representing us.'” Her office, which overlooks the Michelangelo-designed dome of St. Peter’s Basilica, was filled with family pictures, a framed photograph of Francis, and the portrait bust of another predecessor: neoclassical sculptor Antonio Canova, the first director of the papal museums.

Jatta said that art had played a big role in her family: Her mother and sister are art restorers; her grandmother, who was originally from Russia, was a painter; and her paternal ancestors founded an archaeological museum named after the family in Ruvo di Puglia, in southern Italy.

Eike Schmidt, German director of the Uffizi Gallery in Florence, said Jatta’s appointment was a positive sign. “Within the male-dominated Vatican, to give such a prominent role to a woman was very good news,” he said, adding that he hoped the world of culture would soon “move beyond” gender considerations and “look at people for what they did and what they do.”

One curator now working for Jatta, Maurizio Sannibale of the Gregorian Etruscan Museum, said he had known her since they were students in Rome. He described her as “affable, decisive and empathetic” and said that she “knows how to set challenges for herself.”

Running the Vatican Museums is a colossal job. Jatta is responsible for preserving, displaying and sharing knowledge of the treasures accumulated by the popes over the centuries, including the vast Egyptian and Etruscan collections, the “Laocoön” sculpture from the first century B.C., and Leonardo da Vinci’s 15th-century painting “St. Jerome.” In their breadth, history and caliber, the museums make the Palace of Versailles look like a flashy upstart.

Whole sections of the museums are undergoing renovations ordered by Paolucci, a former culture minister who was director for nine years and who had previously led Florence’s museums. The renovations include work on a 16th-century public courtyard known as the Cortile della Pigna (one of many projects supported by the Patrons of the Arts in the Vatican Museums).

Tourism is a lifeline not only of the museums, but of the Vatican as a whole. Of the 100 million euros ($119 million) in annual revenue generated by the museums, roughly half goes to the state, according to Paolucci.

That complicates any director’s job. So does the fact that many of the museums’ sites have both artistic and religious significance — starting with the Sistine Chapel.

Six days a week, and on the last Sunday of each month, throngs of visitors scurry past masterpieces by Titian and Caravaggio and through a suite of rooms painted by Raphael to reach Michelangelo’s chapel. On a recent afternoon, the sacred enclosure was full of adults gaping at the ceiling, babies in strollers and tour guides with flags on sticks. Guards periodically hushed the crowds, and stepped in to stop people taking photographs.

The sweat and breath of millions of visitors, and the dust they bring in, endanger the chapel’s frescoes, Vatican conservation teams have found. Paolucci once envisaged a virtual Sistine Chapel on the museum’s premises: a full-size replica or a digital simulation that crowds could experience to limit congestion. He also announced that walk-in visits would end once numbers reached 6 million a year. From that point, he said, tickets would need to be purchased online in advance.

But Paolucci left without introducing his plans.

Jatta, who worked under Paolucci as deputy director and heir apparent starting in mid-2016, said she was against preventing walk-in access to the museums, even though 2017 totals look set to show another significant increase in the crowds, by about 10 percent. “If you were a visitor wishing to see the Sistine Chapel and you got to Rome and were told that it couldn’t be seen, what would you do?” she asked. “We are also a museum with moral and spiritual value. The Sistine Chapel is also a chapel, and that’s something that cannot be forgotten.”

As for a virtual Sistine Chapel, it would take up too much space and cost visitors more, she said. Instead, the Vatican Museums have advised on an immersive multimedia show (with a soundtrack by Sting) that is to open in March in an auditorium near the Vatican, illustrating the story of the Sistine Chapel. Jatta said she also planned a second entrance to the Vatican Museums that would offer alternative routes through “parts of the museums that are less visited,” such as the Ethnological Museum. An institution close to Francis’ heart, the Ethnological Museum will soon reopen with expanded displays of the 80,000 objects it holds, many of which were sent from around the world for an exhibition organized by Pope Pius XI in 1925.

Jatta added that she was extending opening hours at other institutions such as the Etruscan Museum to bolster visits.

Getting tourists to take more notice of other museums is difficult. And whatever route they take, visitors will still want to see the Sistine Chapel, as Jatta acknowledged. So how would a new entrance solve the problem?

Jatta said the central objective was to alleviate congestion, as the Louvre Museum in Paris had done, through “a better distribution of tourists inside the museums.”

Visitor traffic aside, Schmidt said that the Vatican collections, started around two millenniums ago, were “one of the longest-standing collections of art that mankind has.” They had “an almost unique importance across the planet,” he added.

Jatta’s mission, as she described it, was to “find a way for visitors to see them in the right conditions.”