Raleigh, N.C. — Friends and supporters of the late U.S. Sen. Jesse Helms will hold an alumni gathering at North Carolina's Executive Mansion on May 25, according to an invitation sent out by the Jesse Helms Center. 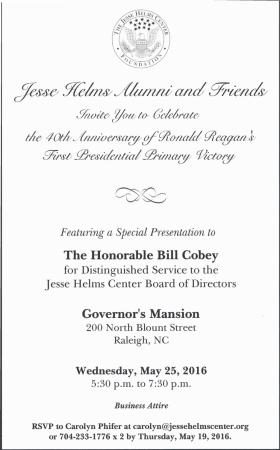 The event will honor Bill Cobey, a board member for the center and past state Republican Party chairman. It will also honor Ronald Reagan's 1976 primary victory in North Carolina.

Although Reagan lost his bid for the GOP nomination to then-President Gerald Ford that year, his win here helped keep him in the race and position him for victory in 1980. Helms' political machine helped Reagan score his key North Carolina victory.

The event is not a fundraiser for the center, Rogers said, but will cover the cost associated with the event. Tickets are $40 each, according to a form included with the invitation.

The mansion is the governor's official residence, but Gov. Pat McCrory does not plan to attend the event, according to a spokesman.

"They are paying to use the facility like any other nonprofit would," said Josh Ellis, McCrory's communications director.

Other groups that have rented the mansion for recent events have included the Junior League of Raleigh, the AKA African-American sorority, the North Carolina Science Festival, the Girl Scouts Association and the North Carolina Council for Women.

"It's a whole diverse group of folks that rent it," Ellis said. "We have not said no to any nonprofit that's asked (to rent it) during his time in office."

It's also worth noting that Jimmy Broughton, McCrory's deputy chief of staff, is on the center's board.

Helms, who died in 2008, is an icon of the political right and a revered figure for many social and fiscal conservatives.

However, he was a controversial figure for much of his time in public life as a broadcaster and politician. Throughout his political career, Helms did not shy away from socially conservative stands on race or gender. He vocally opposed LGBT causes, such as funding for AIDS/HIV treatment, during his time in the Senate. That history, combined with the current debate over House Bill 2 – the measure dealing with which bathroom transgender people can use} that is vocally opposed by the LGBT community – could raise eyebrows. McCrory signed HB2 hours after its passage by lawmakers last month.

"I wouldn't buy that at all," Ellis said, noting that the event is strictly a rental arrangement rather than some sort of political statement or expression of support.

"Governor McCrory is under fire nationally for dragging North Carolina back in time and passing one of the most sweeping discrimination laws in the country," said Kimberly Reynolds, a spokeswoman for the North Carolina Democratic Party. "So, it should be no surprise that he’s opening the Governor’s Mansion to raise money for the Jesse Helms Center, named for one of the most anti-civil rights and anti-LGBT politicians in North Carolina history. The governor has claimed that HB2 isn't about discrimination, but it's clear by the company he keeps what his real agenda is."