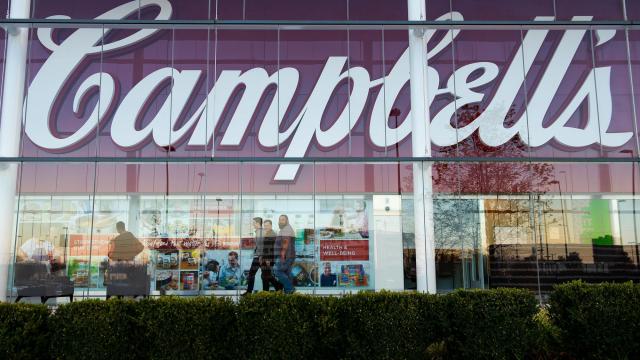 Daniel Loeb is happy to play the barbarian at the gate. He’s got the money, about $3.1 billion. He’s got the office, a sleek white space that is a quintessential hedge fund aerie, with art by Jean-Michel Basquiat, Jeff Koons and Andy Warhol. And in taking on the old-money family who owns more than 40 percent of Campbell Soup Co., he’s found the perfect foil for his new-money ambitions.

Third Point, Loeb’s hedge fund in Manhattan, is pushing for the sale or restructuring of Campbell, a slumping food giant that has called Camden, New Jersey, home for nearly 150 years.

He’s up against the descendants of John T. Dorrance, a chemist who devised the formula for condensed soup at the turn of the last century. Dozens of family members depend on the dividends they receive from the company to underwrite their comfortable lives. And for the most part they find Loeb’s proposals anathema.

“We’re interlopers who’ve come in and they’ve decided to stick with the status quo,” Loeb said in an interview.

His hedge fund and the company have spent months exchanging barbed letters. Their battle will culminate on Nov. 29, when Campbell shareholders vote on a proposal by Third Point to take five seats on the company’s board. Loeb has even persuaded one dissident Dorrance heir and a former Campbell board member, George Strawbridge Jr., to join his campaign.

“My cousins were complacent and ignored the truth,” said Strawbridge, who owns nearly 3 percent of the company. “It’s very much a shame. The company has run into very hard times and has been undermanaged and under-supervised.”

But Loeb, who controls more than 7 percent of Campbell stock through Third Point, will need to win over many more shareholders to be successful. His board nominees won the endorsement of Institutional Shareholder Services, a proxy advisory firm, on Wednesday. The hedge fund, ISS said, “has presented a compelling case that change at the board level is warranted.”

Campbell is clearly struggling. Earnings were down 50 percent last quarter, soup sales have been eroding, and the company’s chief executive, Denise Morrison, stepped down under pressure in May.

Multibillion-dollar acquisitions under her watch have done little to lift profits while leaving the company with billions in debt. In the last two years, Campbell’s stock has badly trailed the broader market, as well as other food businesses, and has lost more than a third of its value.

Executives and board members acknowledge the company’s problems. “Simply put, we lost focus,” the interim chief executive, Keith R. McLoughlin, told investors in August. But they say Loeb is just looking to make a quick profit on his investment and doesn’t have the company’s long-term interests at heart.

Archbold D. Van Beuren, a Dorrance descendant and one of three family members on the Campbell board, said the company was working on a plan to turn itself around before Loeb showed up. “We need change,” Van Beuren said. “We’re seeking change.”

Campbell Soup is more than an inheritance or an investment for the Dorrance heirs. It’s a tradition — Strawbridge enjoys a bowl of Campbell Soup every day, usually tomato. As children, family members would summer in Bar Harbor, Maine, and dress up as Campbell kids and soup cans.

Theirs is a world of privilege, complete with flying private planes and breeding and racing thoroughbreds. Like his father before him, Strawbridge rode horses and hunted fox. His son, Stewart, won the Maryland Hunt Cup in 2007, among the world’s most arduous steeplechase races.

Mary Alice Malone, a board member and a granddaughter of John T. Dorrance, splits her time between horse farms in Florida and Pennsylvania and has a net worth of $3.1 billion — putting her at par with Loeb — according to Forbes. Her daughter is also an equestrian, specializing in dressage, and co-founded a high-end shoe line called Malone Souliers.

Bennett Dorrance, another board member, is worth $2.6 billion. He is a real estate developer who collects vintage cars and is a pilot with his own private hangar in Arizona. Dorrance’s son, Bennett Dorrance Jr., is an organic farmer in Hawaii who owns the Blue Dragon Restaurant and Spa there. It may be hard to think of a fellow billionaire as an outsider in this milieu, but that’s how Loeb and Third Point portray their fight with the Dorrance clan. It’s an approach he has used before as an activist investor with a knack for acquiring stakes in companies that have been underperforming. He has previously waged campaigns at Nestlé, Yahoo, Baxter International and Sotheby’s, many of which entailed months of bruising public-relations battles.

Munib Islam, a Third Point partner who is one of the hedge fund’s candidates for a board seat, said Campbell had lost sight of the interests of nonfamily shareholders. The family’s opposition to Third Point, he said, “was on the basis of bloodlines as opposed to what’s good for the company. If they want to run the business that way, then take the company private.”

Michael Silverstein, a former food industry consultant with Boston Consulting Group who is advising Third Point, suggested the heirs were a big part of the problem.

“I worked with the family two decades ago,” Silverstein said. “They are proud of Campbell’s but introverted. They are fearful of outsiders, fearful of their wealth being taken away. More than 100 family members are dependent on the dividend and fearful of what to do.”

Campbell is, of course, fighting headwinds like declining consumer interest in packaged food and a preference for fresh ingredients over highly processed soup from a can. But analysts say the company has done too little to adapt to those changes. Campbell Soup cans, for example, have barely changed since 1900, and the top sellers remain tomato, chicken noodle and cream of mushroom. Third Point has proposed modernizing labels on Campbell’s trademark red-and-white cans, an icon whose status in American culture was immortalized by Andy Warhol. (One of the artist’s soup can paintings hangs in the company’s boardroom.)

But McLoughlin, the interim chief executive, said that Loeb and his deputies had painted an overly pessimistic picture of the company. The company estimates that 95 percent of American homes have at least one Campbell product in the cupboard.

“We’ve got a great brand, great products and great cash flow,” he said. “There’s lots to work with.”

In late August, management released a plan to revitalize the company. It calls for selling international operations, like Arnott’s Biscuits in Australia, getting out of the refrigerated soup business and unloading its Bolthouse Farms unit. The company would return its focus to soup and popular snack brands like Goldfish, Pepperidge Farm cookies and Snyder’s of Hanover pretzels.

McLoughlin also disputes the idea that the Dorrance descendants wield too much influence at the company or that they are responsible for its problems. He said family board members frequently chime in with helpful advice. He said he had gotten calls from Malone during store visits, complaining about the packaging of its new Well Yes! line of ready-to-eat soups. “She’s into clean labeling, no artificial flavors and no chicken antibiotics,” McLoughlin said. “She’s as strong on the product as anyone on the board.”

Bennett Dorrance, McLoughlin said, is an expert in merchandising and pricing for Campbell’s products. “He’ll call me and say, ‘Why is Prego at this price point versus Ragu?'”

“These people are committed financially and committed personally,” McLoughlin added. “They’re all in. They’re sophisticated and they know the New York hedge fund game.”

When they are not making the case for why their approach is far superior, people on both sides of this corporate fight say they are open to a compromise. Campbell could, for example, give Loeb a few seats on the board while letting the family retain its influence.

Strawbridge said that’s the kind of deal he was hoping for when he teamed up with Loeb. “Third Point should be an ally, not an enemy,” he said. “Soup was de-emphasized and ignored and Third Point is right that it is the first thing that has to be addressed. Soup of all products is our savior.”