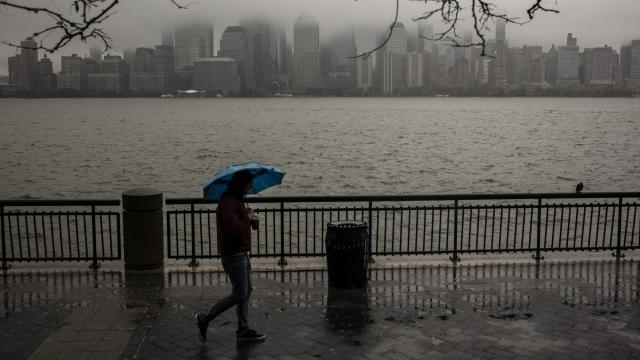 The storm dumped more than 3 inches of rain in parts of New York, New Jersey and Connecticut on Tuesday, with more expected through the night. But as of Tuesday evening, it had yet to match the intensity of the deluge brought by the remnants of Hurricane Ida last month.

After a lull Tuesday afternoon, rain began falling again in the evening, and the storm system was expected to linger through Wednesday morning. Meteorologists warned that the storm could still produce heavy winds, significant rainfall and flash flooding across the Northeast.

The sprawling nor’easter began to move up through eastern Massachusetts, including Boston and Cape Cod late Tuesday, dumping up to 4 inches in some areas. The state was reporting about 27,000 power outages just after midnight, with winds of up to 70 mph bringing down trees along the coast.

Around New York City, the storm’s resurgence Tuesday night threatened to snarl Wednesday morning’s commute, and officials warned that heavy winds, which began Tuesday afternoon and were expected to continue overnight and into Wednesday, could bring more power outages

The easternmost part of Long Island, the southeastern corner of Connecticut and parts of coastal Massachusetts and coastal Rhode Island were under a high wind warning until Wednesday afternoon, with the Weather Service cautioning that “widespread power outages are expected.”

Utilities in New York, New Jersey and Connecticut reported hundreds of outages throughout the day, and officials said that they expected to see increased power failures in all three states, particularly in coastal areas, as winds intensified.

“We almost certainly expect that number to go up, perhaps dramatically, with the higher winds that are coming later,” said Gov. Philip Murphy of New Jersey.

Roads flooded across the region, with flood warnings in effect through Wednesday on the Saddle River in Lodi, New Jersey, and the Ramapo River in northern New Jersey and Orange and Rockland counties in New York. The Weather Service extended a flood warning in Warren County and Sussex County through Wednesday morning after seeing “minor flooding” near streams and creeks.

The Weather Service also said there would most likely be minor flooding in southern Connecticut and on Long Island.

Nelson Vaz, a meteorologist at the National Weather Service in New York, said that forecasters were concerned about flooding in northeastern New Jersey, where “some of the rivers are starting to come over their banks.”

Though New York City’s mass transit system experienced some interruptions, the storm had far less effect than the remnants of Ida. Some buses and commuter trains, including New Jersey Transit and the Metro-North Railroad, experienced scattered weather-related delays, but the subway was operating as expected.

As of Tuesday afternoon, intensive flash flooding had yet to materialize, though earlier in the day, parts of northeastern New Jersey that had been inundated last month — including the state’s largest cities, Newark, Jersey City and Paterson — were placed under a flash flood warning that coincided with the morning commute.

Several public school districts in those areas decided to close in anticipation of the storm. Rutgers University asked instructors to move all of their classes online Tuesday.

“In order to keep all students safe, all schools will be closed,” said Franklin Walker, the superintendent of Jersey City’s public school system, one of the largest in the state. Schools in nearby Bayonne and in Montclair were also closed. Parts of central New Jersey were also under similar flood warnings early Tuesday, with meteorologists warning of “life-threatening flash flooding” in Monmouth County in particular. The Weather Service warned residents not to drive into flooded roads and cautioned that storm runoff would most likely cause flooding in urban areas and low-lying spots.

By Tuesday night, more than 4.3 inches of rain had been recorded in Brooklyn, more than 5.3 inches in Suffolk County and more than 5.2 inches in northern New Jersey, according to the Weather Service. A flash flood watch was in effect for parts of Long Island and Connecticut into Tuesday.

The rain started falling again Tuesday evening and was expected to continue through the night across much of the region.

Some storm drains in Midtown Manhattan were straining to keep up with the heavy rains filling the streets, backing up at the corners and creating large puddles for pedestrians to navigate. The Police Department reported flooding that in some cases blocked traffic during rush hour on the Brooklyn-Queens Expressway, a key traffic artery.

Winds of up to 35 mph, with gusts reaching 60 mph, were expected across coastal areas, including New York City, into Wednesday morning, raising the prospect of downed trees and power failures. Vaz said that parts of Long Island were particularly likely to experience very strong gusts.

Officials moved quickly to prepare for the nor’easter, in part scarred by the intensity of several storms this summer that exposed the region’s vulnerability to the extreme weather events made more frequent and intense by climate change.

“We’re not looking outside and seeing Ida today; however, every storm has to be taken seriously,” Joseph Fiordaliso, who leads New Jersey’s utility board, said at a news conference.

“Someday maybe we’ll just have a regular rainstorm. We don’t seem to get those much anymore,” he said, adding, “Climate change is real, and we have to work to mitigate as much of it as we possibly can.” The threats were brought into stark relief last month, when torrential rain brought by Ida unleashed rushing waters that killed 11 people, including a toddler and his parents, in basement apartments in New York City. At least 43 people died across New York, New Jersey, Pennsylvania and Connecticut amid the hurricane’s watery remnants.

Both Gov. Kathy Hochul of New York and Murphy declared states of emergency Monday evening, directing agencies under their command to be ready to act on emergency response plans.

In New York City, officials advised residents of basement apartments like those that flooded last month to be ready “to move to a higher floor during periods of heavy rain,” and urged anyone living in flood-prone areas to “keep materials such as sandbags, plywood, plastic sheeting, and lumber on hand” to protect their homes.