Several counties in the Triangle were under a heat advisory for much of Saturday because the expected high temperature in the mid-90s will feel much hotter when you factor in the humidity.

The National Weather Service issued the advisory, which runs from 11 a.m. to 9 p.m. Saturday, includes Wake, Durham, Nash, Johnston, Edgecombe, Franklin, Lee and Moore counties. The weather agency warned that heat and humidity could lead to heat stress for residents who are outside for an extended period of time.

WRAL meteorologist Mike Maze said people should not overexert themselves if they have to spend extended periods of time outside Saturday. He said that it could feel as hot as 103 degrees. 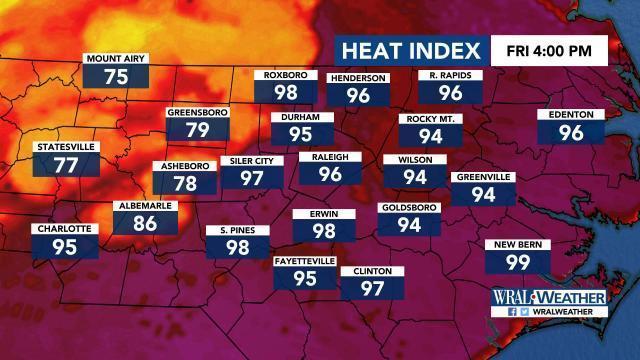 RESOURCES: How to beat the heat

WRAL meteorologist Elizabeth Gardner said the sweltering weather will stick around for the foreseeable future -- just three days after the high temperature struggled to break 80 degrees on Tuesday after a cold front moved through the region.

"It will feel like triple digits over the weekend," she said. "It will be 95 degrees on Saturday and will feel toasty."

There were a few pop-up storms around the Wilmington area because of a stalled front, although Gardner said the chance of a stray storm in the Triangle could not be ruled out.

HIGH TEMPERATURE: 95 on Saturday and Sunday | 97 on Monday

TAKE IT EASY: If you can and avoid being outside during the middle of the day!