Fort Bragg, N.C. — A salute rained down on the plane carrying Staff Sgt. Ian Paul McLaughlin as it arrived at Fort Bragg.

McLaughlin returned home to his family but in the most heartbreaking way.

A squad leader assigned to 82nd Airborne Division, McLaughlin was killed in Kandahar, Afghanistan, while conducting combat operations on Jan. 11.

Pfc. Miguel Angel Villalon, who was a combat engineer on his first deployment, was also killed.

McLaughlin was honored by leaders, paratroopers, friends and family before being transferred to his wife and children.

Shortly after his casket was removed from the plane, his wife placed her hand on it. 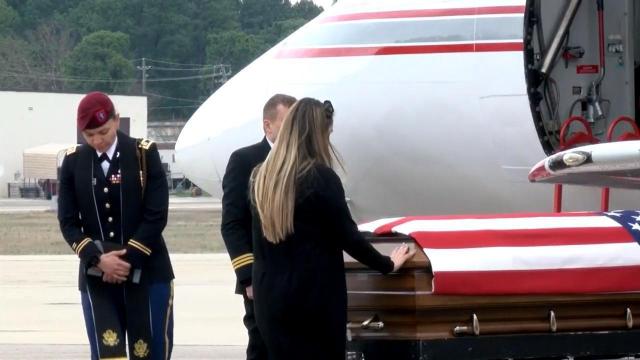 A Patriot Guard of roughly 50 motorcycles guided the soldier from Fort Bragg toward a funeral home in Fayetteville as fellow service-members saluted.

Steve Havens, a member of the Patriot Guard, was on one of the bikes to honor the fallen soldier.

“We also do not want anyone to feel like they are forgotten because they will never be forgotten,” Havens said.

Havens’ son was also a soldier. He died two years ago.

Randy Johnson, who lives in Fayetteville, said he wanted to community to recognize McLaughlin’s passing and what he stood for.

Many people did that by gathering along the city’s streets, holding flags where McLaughlin’s procession would pass.

Johnson said it was also about showing respect and, hopefully, comfort for his family.

“I wish we had hundreds or thousands of people out here,” he said.