Heard the One About the Disabled Muslim Comic From Jersey? 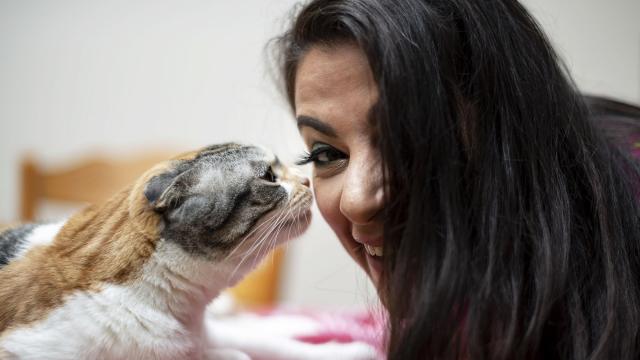 CLIFFSIDE PARK, N.J. — Standup comedian Maysoon Zayid likes to joke that if there were a competition called the Oppression Olympics, she would win gold.

“I’m Palestinian, Muslim, I’m a woman of color, I’m disabled,” Zayid, who has cerebral palsy, tells audiences, before pausing a beat to hang her head, her long dark hair curtaining her face, “and I live in New Jersey.”

The joke lands laughs whether Zayid tells it in red states or blue, and puts people exactly where Zayid wants them: disarmed, charmed and eager for more. She told it near the beginning of her 2014 TED Talk, which drew nearly 15 million views, became the most-watched TED Talk that year and changed Zayid’s life. She now has a development deal with ABC to create a semi-autobiographical sitcom called “Can-Can,” starring her.

The show faces daunting odds; only a handful of the dozens of scripts networks order each fall make it to air. But if “Can-Can” makes it all the way — Zayid told studio executives that she would end up in an internment camp if it didn’t — it may push two populations, one widely ignored, the other demonized, from the country’s margins into the mainstream.

People with disabilities make up nearly 20 percent of the population yet account for about 2 percent of on-screen characters, some 95 percent of which are played by able-bodied stars. And it is hard to imagine a group more vilified in the United States than Muslims or Middle Easterners, whom, as Zayid’s television writing partner, Joanna Quraishi, said, “Americans see as either terrorists or Kardashians.”

The executive producers of “Can-Can” include Todd Milliner and Sean Hayes, who plays Jack on “Will & Grace,” itself a groundbreaking show credited with helping make gay characters mainstream. Milliner and Hayes are well aware of the envelope-pushing potential of “Can-Can,” but said that was not what sold them on Zayid. Her energy filled the room, and she was self-aware, super smart, and madly funny. Crucially, she had a singular story. “The whole business is moving even more toward authentic stories that aren’t on TV right now,” Milliner said. Zayid is a vociferous part of a small, dedicated movement calling attention to disability rights in entertainment, which are consistently overlooked in the quote-unquote diversity conversation. Jay Ruderman, president of the Ruderman Family Foundation, a philanthropic and advocacy organization for disability rights (it also works to strengthen ties between American Jews and Israel), said Zayid’s show could crush enduring stigmas disabled people face. “Progress is being made very slowly, but shows can be transformational,” he said.

The “Can-Can” character will be much like Zayid, a woman who happens to be disabled and Muslim and who grew up in New Jersey with big hair and Metallica T-shirts, navigating love and friendships and the world.

Zayid lives in a bright, plant-filled apartment in Cliffside Park, New Jersey, that she shares with her husband and their cat. She likes to keep her husband’s name under wraps, and publicly refers to him as Chefugee, for he is indeed both a refugee — they met while she was working with refugees in the Palestinian territories — and a chef.

Zayid’s parents, who are from a village outside Ramallah, also raised their family here. Zayid is the youngest of four daughters, and had an idyllic childhood despite a traumatic birth. The doctor botched her mother’s C-section, she said, smothering Zayid. Cerebral palsy is not genetic; it’s often caused by brain trauma before or during birth, and manifests differently in people. Zayid shakes all the time, though yoga has lessened the severity, and can walk but cannot stand for very long (she calls herself a sit-down standup comedian).

Her parents treated her no differently from her siblings. Her father, a gregarious salesman, taught her to walk by having her stand on his feet. She was sent to dance and piano lessons because the family could not afford physical or occupational therapy, and she became a popular high achiever. “I lived in a bubble,” she told me, “and that is very much related to who I am now.”

At college, her bubble burst. She went to Arizona State University on an academic scholarship, and on her first day in an English literature class, her professor stunned her by asking, “Can you read?” She majored in theater — her lifelong dream has been to appear on “General Hospital” — yet despite wowing teachers she was never cast in school productions. Even when the theater department mounted a play about a girl with cerebral palsy, a nondisabled student was chosen over Zayid for the part.

“It was devastating, because I knew I was good,” Zayid said. “The girl who got it was a great actress. But why would anyone want to see her fake cerebral palsy, when I’m sitting right here?”

It was a light-bulb moment, and she realized that the movies she loved with disabled characters, like “Born on the Fourth of July,” “What’s Eating Gilbert Grape,” “Rain Man,” all had visibly nondisabled stars. She pursed acting after graduation, until a forthright acting coach told her she would never get cast, and ought to do a one-woman show. Zayid took comedy classes instead, began to get gigs, and after Sept. 11 started the New York Arab-American Comedy Festival with Dean Obeidallah. “The simplest way for me to describe Maysoon is fearless,” Obeidallah said. She also toured with the standup comedy show Arabs Gone Wild, landed a part in Adam Sandler’s “You Don’t Mess with the Zohan,” and became a political commentator on “Countdown with Keith Olbermann,” which proved a revelation.

Zayid had long understood that some nondisabled people recoiled at disabilities out of fear. “They’re one popped blood vessel or car accident away from being this way,” she said. But her Olbermann appearances drew hateful online comments calling her, she said, “a Gumby-mouth terrorist” and “an honor killing gone wrong.” It was the first time Zayid had been mocked for being disabled, and made her suddenly aware of the abuse that disabled people routinely faced.

After Zayid’s TED Talk went viral, she became one of the most booked speakers at the huge talent agency WME, and used her bigger platform to push questions forward: Where were the visibly disabled news anchors and talk-show hosts? Why, outside a handful of shows — among them “Switched at Birth,” “Breaking Bad,” “American Horror Story” and “Speechless” — were visibly disabled actors largely absent from television? Why was it OK for nondisabled stars to play disabled characters — a practice nicknamed “CripFace” — and win big awards?

While performances by, say, Joaquin Phoenix as a wheelchair-using cartoonist or Eddie Redmayne as Stephen Hawking largely go unquestioned, and even lauded, by able-bodied people, Zayid said that for many people with disabilities, their acting looks cartoonish, exaggerated, offensive and inauthentic.

“You can put on makeup to look Asian or Latino or black, but black, Asian and Latino people know you’re not,” she said. “And disabled people watching their disabilities being poorly portrayed know it’s not them either.”

Zayid will find out in January whether her show is to be made into a pilot. In the meantime, she is zipping around the world. In recent years, her gigs have included performing at the Team Beachbody Coach Summit — it’s for workout fiends — in Nashville, Tennessee; opening for Pitbull in Las Vegas; and doing comedy, in both Arabic and English, in the United Arab Emirates (“They loved me,” she said).

At every turn, she slaps down people for using a particularly dreaded word.

“If you think I’m inspirational because I go and do sit-down standup comedy uncovered and uncensored in the middle of the Arab world, I’ll take it,” she said.