Heading to see NC State play? Check out these spots!

Raleigh, N.C. — If cheering for NC State is on the agenda and you're looking for good spots to eat before or after the game then check out these places!

For the early games, stop by Pam's Farmhouse on Western Boulevard for some breakfast. It's really close to Carter Finley and they serve the best country cooking. They open up at 6 a.m. on Saturday mornings and stay open until noon. The staff is really friendly, the place is quaint and the biscuits are great! They keep the coffee coming and I'm always a sucker for chocolate milk.

Swing by Krispy Kreme and grab donuts for the tailgate, but make sure you eat them warm. Based out of Winston-Salem, the donuts took off around the south and are now nationwide.Go for a dozen of the plain glazed for sure, then mix it up with whatever delicious sweets you like, bear claws, chocolate sprinkles, doughnut holes or cinnamon twists. Also right now they are featuring the pumpkin spice which is oh-so-good for fall.

If you're trying to catch some games around your game, Backyard Bistro is a walk-away from the stadium. First off they host the Tom O'Brien & Mark Gottfried Radio Show on Monday's so they are definitely Wolfpack friendly.

They offer special menus on game days in order to get you to the game on time and you can even call ahead for orders to pick up on your way to the tailgate. Their five big screens are accompanied by several smaller ones all over the restaurant and bar, plus you have your own audio at the booths so you can listen to whatever game you want. You can't go wrong with any of their burgers and barbecue but their Lettuce Bowl is one of my favorite salads around town.

Another Wolfpack fan favorite is Amedeo's. Take some time to wander around the restaurant and look at all of their NC State paraphernalia. They have pictures and autographs from any former NC State star and their lasagna is to-die-for. They offer great tailgate spreads if you're craving some amazing Italian food. Open at 11 a.m. until with a full bar, it's the perfect place to walk down Wolfpack memory lane before or after a game.

One of WRAL Out and About's Five Faves the Players Retreat on Hillsborough is close and convenient to campus. It's been around since 1951 and recently got a face lift. Open from 11 a.m. til 2 a.m. this place is packed with good food, lots of TVs (complete with the Direct TV Sports Package) and a very extensive drink list. Their regular menu is offered late along with additional breakfast options. The chili cheese fries and sausage dip are must gets.

Another Raleigh staple is The Raleigh Times. It's a popular spot for celebrities who come through town, most recently members of the Miami Heat threw back a few pints while in town for an exhibition basketball game in October. Due to it's popularity it has expanded to four bars, two stories and an expanded kitchen. Stuck in the heart of downtown, the atmosphere is great, once housing the old newspaper from which it gets its name. The full food menu is available from 11:30 a.m. to 2 a.m. Go with the Blackened Chicken Romaine Salad or The Raleigh Times Burger or anything for that matter they are all great and uniquely delectable. The beer list is full of some of the finest beers, I'm a hop head and love their Terrapin Hopzilla. But if you want to get down right crazy try the Drie Fonteinen Schaerbeekse Kriek, a Belgium rariety avaible for $58 dollars a glass. If you're not from the area definitely stop in for a drink after the game! 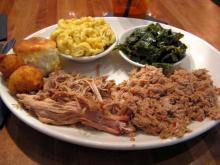 Looking for a nice sit-down hot spot for after the game? Go to The Pit. This is authentic barbecue at it's best. But I'm warning you, you will leave with a food coma. A barbecue plate, mac and cheese, collard greens, biscuits and hushpuppies isn't complete without their banana pudding. I really don't think I've had it better anywhere else. Located in Raleigh's warehouse district it's set in a beautifully restored 1930s meatpacking warehouse. Frequently featured in magazines and TV networks across the country they just recently won a rib challenge on Food Network's "Throwdown with Bobby Flay."

For a late night fix, don't miss CookOut on your way out of town. It's no gourmet meal but it hits the spot after a day of tailgating. If you're from around Raleigh you know what a CookOut tray is. And trade your drink for a Fancy milkshake, any combination you can come up with works!