Headed to the polls? Beware of deceptive voter guides

Raleigh, N.C. — If you haven’t decided whom to support in the primaries, there are certainly lots of people who’d like to help you.

Of course, politicians and special interest groups are more than willing to tell you about their preferred candidate.

The problem? Some campaign materials are deceptive, and their creators have questionable ties. 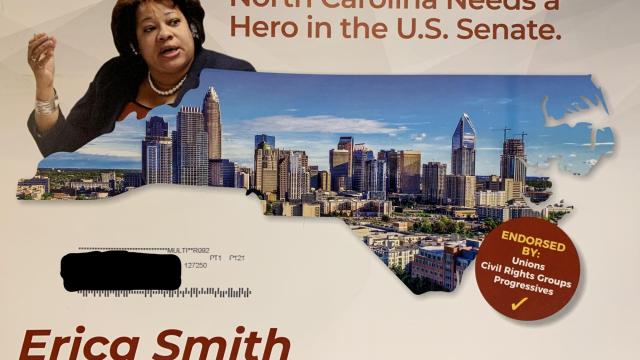 Why is a Republican group spending money on ads for a Democrat?

Smith is one of five Democrats hoping to unseat Republican U.S. Sen. Thom Tillis. The others are Cal Cunningham, Trevor Fuller, Atul Goel and Steve Swenson.

Cunningham, who’s backed by the Democratic establishment in Washington, D.C., and has the most money, has accused Republicans of trying to meddle in the Democratic primary. Cunningham believes he has the best shot at beating Tillis, which is why the Faith and Power PAC is trying to elevate Smith.

Smith, for her part, has tried to distance herself from the group.

"I remain unbought, unbossed and unapologetic in my 17 years of advocating for equity, opportunity and fairness," Smith has said in a statement.

WRAL voter guide: Learn more about candidates, find out where to vote

Outside the polls, campaign volunteers often distribute voting guides. But some of the guides can be misleading.

Fliers distributed in western North Carolina earlier this month listed endorsements from a group calling itself the “Official Conservative Ballot Committee of NC,” according to the Smoky Mountain News.

If you were handed a flier with the “Official Conservative Ballot” name on it, you might think it’s a longstanding political group – and you’d be wrong.

The “Conservative Ballot” committee wasn’t established until Feb. 11 – just two days before early voting started in the state. One of the candidates endorsed by the group was Lynda Bennett, a Republican running for North Carolina’s 11th Congressional District seat. 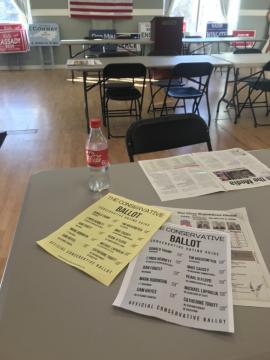 As it turns out, the “Conservative Ballot” group has ties to a consulting group that works for Bennett. Paperwork filed to establish the committee says it was mailed from an address belonging to Jordan Bowman, a consultant for Red Action Strategies. Campaign finance records show Bennett has paid Red Action Strategies more than $5,000 for services.

Bennett, one of several candidates in the race, didn’t immediately respond to WRAL News’ request for comment.

Other Republican candidates in that race told the Smoky Mountain News they had never heard of the “Conservative Ballot” group and never had the chance to seek its endorsement.

There's an election Tuesday. Here's what you need to know.

It’s common for candidates to associate themselves with celebrities or popular people within their party.

Democratic presidential candidate Mike Bloomberg is airing an ad that features video of former President Barack Obama, which could give some viewers the impression that Bloomberg received Obama’s endorsement. But that’s not the case.

While the mailer doesn’t explicitly say Trump endorses O’Neill, the photo could give that impression. But WRAL could find no record of Trump endorsing O’Neill. 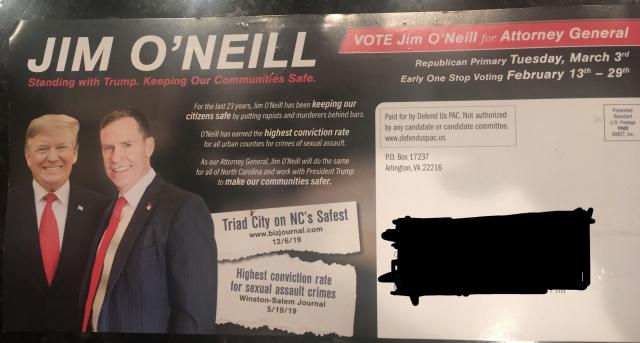 The mailer wasn’t sent by O’Neill’s campaign but by a dark money group. The ads say they’re from Defend US, a political action committee in Northern Virginia. But they were paid for with $100,000 from "A Public Voice," a group based in Ohio.

The O’Neill campaign, for its part, said it has no involvement with the mailer because it’s not allowed to coordinate with political action committees. Asked if O’Neill has been endorsed by Trump, O’Neill spokesman Eddie Woodhouse said, “We’re not going to play out our campaign strategy through the media.”

Mumma, for her part, said the mailer is a “fake Trump endorsement” to try salvage O’Neill’s campaign.