Head Start program helps individuals, families achieve success and get ahead of the class 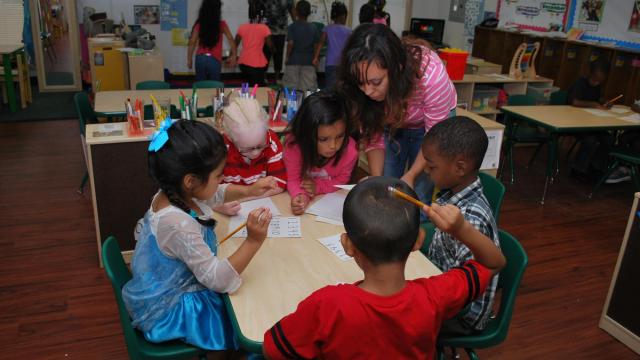 This article was written for our sponsor, North Carolina Community Action Association.

For families in the United States, access to resources and opportunities is not created equal, especially for the 34 million Americans living in poverty.

This is why Head Start is such an important program. Developed by the United States Department of Health and Human Services, Head Start provides health and nutrition services, comprehensive early childhood education, and parent involvement services to low-income children and families.

The early years of a child's development are critical. Research from a study on pre-kindergarten effects conducted by authors from Vanderbilt, Georgetown, and Duke universities, amongst others, suggests preschool graduates "enjoy both short-term and long-term benefits, including improved academic and school readiness, higher graduation rates, and lower incarceration rates" as stated by KQED, an NPR station in California.

"While all kids benefit from preschool, poor and disadvantaged kids often make the most gains," stated an NPR article on the same topic. "Researchers who study pre-K education often find that children who have had early experiences of economic scarcity and insecurity gain more from these programs than their more advantaged peers."

With the cost of childcare rivaling the cost of housing each month in some cases, and pre-kindergarten not readily available or affordable to many families, the impact of Head Start in rural and impoverished communities is hard to dispute.

"There are roughly 2,000 days from the day a child is born until they go to kindergarten. Our job is to help them succeed, promote school readiness, and development of the child in that time period," said Terry David, executive director of the Chapel Hill Training Outreach Project, Inc., the Head Start program in Orange County. "We believe a strong, early learning foundation is needed for children who are impoverished or vulnerable."

About 70 percent of Head Start programs in North Carolina are housed in Community Action Agencies, with the remaining 30 percent being operated by school systems and other nonprofits.

It's no surprise those who are cultivated and enriched from a young age through programs like Head Start have higher rates of success later on in life.

"Head Start is an opportunity for children who are vulnerable or potentially at-risk, to literally give them a head start. And it's not just for the child, it's also for the family to help both child and parents to be better in both school and life," said David.

One of the components that sets Head Start apart from other early childhood education and childcare programs is its parent engagement component.

"We work with parents or guardians to help them set goals for themselves and their family," said David. "A few years ago we did a home buying workshop for some families who were interested, who had goals to improve their credit scores. As a result of this workshop, a family qualified and purchased their first home."

David himself is a product of a Head Start program and said his success and that of his family can be linked to Head Start.

"My parents had 18 children and many of us are doing really well. I have a brother who is a CPA and a twin sister who works in HR, and now I'm an executive director," said David. "Head Start has helped me to be able to pay it forward. I'm now overseeing a program that benefited me early on in life."

David recently was able to sit down and have a conversation with a fellow Head Start alum, Kenneth Ward.

"Ward grew up in North Carolina, but runs a scholarship program out of Washington, D.C. I think he's on the cutting edge of doing something really great and I've challenged him to help us create something like it here in North Carolina," said David.

Ward is the executive director of College Bound, Inc., a "501 (c)(3) nonprofit organization that offers public school students in grades 8-12 academic enrichment and resources to prepare for and succeed in college. Founded in 1991, the organization offers tutoring, mentoring, ACT/SAT preparation, and academic and career guidance free-of-charge to assist students in the District of Columbia metropolitan area in meeting their post-secondary educational goals."

Ward first joined College Bound as a teacher and noted the impact that education has and continues to have on his life and career.

"I grew up in Enfield, which is a small, rural town in Halifax County. It's traditionally one of the poorest counties in the state, and poverty affects education — it was educationally challenged. My mother worked two jobs to take care of me and my sisters, so she enrolled me in Head Start," said Ward. "It was really great because Head Start fostered my love of learning, books and art — I got a really good foundation early on."

Ward would go on to become valedictorian of his high school and earned a full scholarship to the University of North Carolina at Chapel Hill. After graduating from college, Ward got a master's degree in education and spent 15 years teaching before becoming the executive director of College Bound, where he is now helping minority and at-risk students achieve their educational dreams.

"The program has been really effective. We're seeing six year graduation rates of 80 percent from our college students, which is the same for white students and a lot higher than you typically see for the population that we're serving," said Ward. "I think that education is critical to everything that we do. I think it was Malcolm X who said, 'Education is the passport to the future.'"

Both David and Ward routinely work with marginalized populations, and having come from marginalized backgrounds themselves, are both testaments to the impact receiving early childhood education and development services can have.

"Typically, people who have been marginalized start way behind the starting line — you need a head start," said Ward. "If you look at structural inequities, systemic racism and stuff like that, people of color in America start way behind. These people need all of the support they can get. Head Starts are doing so much more now than they did when I was in the program, they're much more developed and working with the whole family."

"Every parent wants to give their kids the best in life. I look at parents who buy their kids really expensive shoes or clothes, but you also can help your kids by giving them the best education," Ward finished. "Head Start works in that space, because what you really want to do is create the best trajectory for your kid and Head Start can be a part of that."

This article was written for our sponsor, North Carolina Community Action Association.