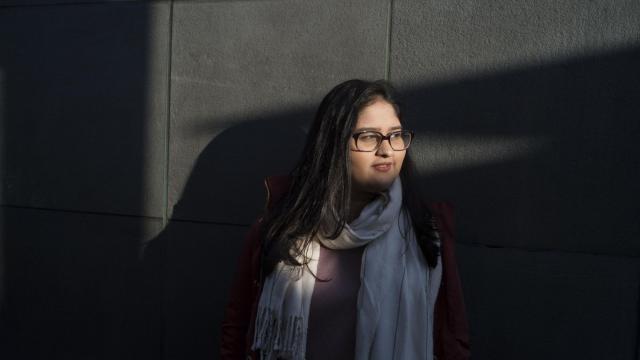 With jitters and with prayers, with countdown clocks in their heads and their immigration lawyers on speed-dial, hundreds of thousands of young immigrants have spent all fall and winter watching President Donald Trump and congressional leaders negotiate their fate, every fleck of news a tantalizing omen.

“It’s like watching a telenovela: Every day is different,” said Francis Madi, 28, who was brought to the United States from Venezuela in 2003 and now lives on Long Island, New York. “Now we’re just going to the stressful part of the telenovela where you wonder what will happen to the protagonist.”

The protagonist, in this case, happens to be her.

Perhaps more than any other single group of people in the country, the Dreamers, as these young immigrants are known, have had their lives shaped directly by the mood swings of national politics.

But in the four months since the Trump administration announced it would shut down Deferred Action for Childhood Arrivals, or DACA, the program that protects 800,000 young immigrants brought to the country illegally as children, the goings-on in Washington have felt especially personal. While Congress engages in a high-stakes staring contest over a substitute program, immigrants have already begun losing their protections, exposing them to deportation.

Then came Tuesday afternoon, when the glimmers of a bipartisan deal emerged. And a little later Tuesday, when Trump appeared ready to throw the entire immigration-reform debate open again. And then late Tuesday night, which brought news of a startling court ruling that threatened to muddle matters yet again. And Wednesday morning, when it was difficult to know how to feel at all. Hafsa Mamun, 18, spends about 30 minutes a night scrolling through news stories about the negotiations after she gets home from classes at Hunter College in Manhattan, where she is a freshman. Born in Malawi to Indian parents and brought to the United States as a 5-year-old, Mamun’s protected status expires in 2019. She said she had not made any plans about the future because things were so uncertain.

“It’s like you’re on edge constantly,” she said. “One day you have hope that it might go through, and then something else comes up.”

An agreement did seem to be staggering closer Tuesday, though how much closer seemed impossible for even the negotiators to predict amid the welter of bewildering signals from Trump. After a year of holding a hard line on immigration, the president suggested in a meeting with congressional leaders that he supported not only a deal to protect the Dreamers but also a comprehensive immigration reform package, raising the possibility that the DACA recipients’ security could hinge on a much messier set of compromises.

Republicans, meanwhile, were still pushing to tie any benefits for the young immigrants to curbs on family-based legal immigration, border security and other conservative priorities that Democrats and immigration advocates have frowned upon.

“We’re being held hostage as a bargaining chip,” said Rafael Robles, 26, a DACA recipient in Chicago who owns an architecture, design and real estate development firm. “I’m not advocating for the Dream Act at the expense of everyone else.”

On Tuesday night, a federal judge in San Francisco ruled that the Trump administration had ended the program improperly and ordered it restarted. Though immigration advocates welcomed the ruling, they cautioned that they expected it to be challenged, if not overturned, and warned that a court order was no substitute for an act of Congress.

It was around 5 a.m. in Fall River, Massachusetts, when Hellosa Silva, 18, a high school senior who came to the United States from Brazil when she was an infant, was jolted awake by a news alert on her cellphone informing her of the judge’s decision.

“I read it and got super excited,” she said.

Immigration lawyers were deluged Wednesday morning with clients eager to take advantage of the court-ordered reinstatement. Jeremy McKinney, an immigration lawyer in North Carolina whose firm has more than 1,000 clients with DACA, said he posted the court ruling on the firm’s Facebook page late Tuesday, only for his phones to blow up in the morning.

McKinney said he had advised his clients against filing renewal paperwork because there was no guarantee the administration would approve any new applications, even if it did not win on appeal, and he did not feel comfortable accepting legal fees for what would likely be a futile effort.

It was difficult news to break to clients who are emotionally exhausted.

“We certainly have been wearing our counselor hats here at the law firm,” he said. “We do our best to talk them through it, to kind of decrease their anxiety levels, but frankly, it’s not working.”

Ramiro Luna was working late on Tuesday in Dallas when he saw the news about the judge’s ruling on Facebook. It did little to relieve the tension he felt every time he thought about his DACA status — which was to say, every time he looked at the countdown clock on his iPhone that tells him how many days he has left before it expires.

On Wednesday, the clock stood at 280 days.

“Every single day,” he said, “I feel like I have one day left to consider myself safe here.”

Luna, 33, came to the United States from Mexico with his father at the age of 7. Now studying psychology at the University of North Texas at Dallas, he works as the campaign manager for state Rep. Victoria Neave, a Dallas Democrat.

He said he had grown accustomed to living with chaos and uncertainty. For one thing, he might lose his work permit before ballots are cast in the election he is working on.

DACA has allowed its recipients to get jobs, go to college, obtain driver’s licenses and open 401(k)s. All those opportunities are now at risk.

“We’re at the mercy of the administration. We’re at the mercy of court rulings,” Luna said. “Right now I’m already thinking: What kind of remedial job am I going to be able to do without documentation?” For Missael Garcia, 27, the question was no longer theoretical. The work permit he obtained through DACA has already expired, forcing him to give up his job as a mentor with the Baltimore city schools system. Now he works as a restaurant cook, paid off the books in cash, he said.

On Wednesday, unwilling to leave matters to a judge, he was in Washington, knocking on lawmakers’ doors with a Baltimore-based advocacy group, CASA in Action.

“I feel like this government says things that get people excited and then gets their hopes up,” he said, “and at the end of the day it’s like a stab in the back.”

Knocking on doors, calling members of Congress, spreading the word on social media: Activism was the only hope most DACA recipients had of influencing a process that had played out in front of millions, on television and in news outlets across the country, yet would ultimately come down to the inclinations of a few.

Most immigration activists believe their best chance at a deal for the Dreamers is now, when Democrats can threaten to withhold support for a spending bill Congress would need to pass to prevent the government from shutting down on Jan. 19.

More than 100 DACA recipients have been traipsing throughout the Capitol in Washington for the past two days, telling their stories to lawmakers in an urgent effort to persuade them to enshrine the program into law.

One of them was Hector Rivera Suarez, 20, the student body president at Guilford College, in Greensboro, North Carolina, whose DACA status expires Jan. 21.

“Now I feel like I don’t have control over my own future anymore,” he said. “I had all these plans, but now it’s up to someone else to make those decisions for me.”