He Weaned Himself From Ride-Hailing Apps. Here’s Why. 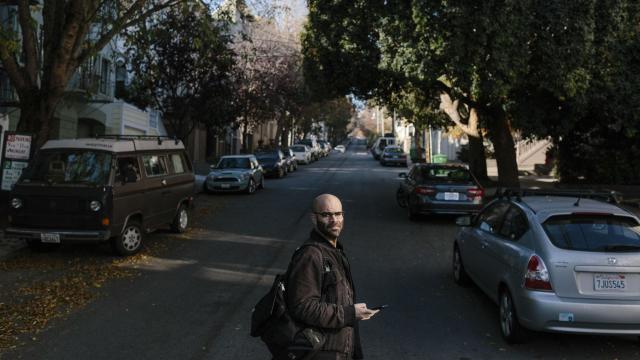 How do New York Times journalists use technology in their jobs and in their personal lives? Mike Isaac, a technology reporter for The Times based in San Francisco, discussed the tech he’s using.

Q: You write a lot about Uber. How many Ubers or Lyfts do you take a week?

A: It varies, to be honest. For a while back in 2013 to 2014, I was a frequent user of both services in San Francisco and New York. Plus, since I’m reporting on the companies, I need a good grasp of what Uber and Lyft are up to in designing their products.

But I stopped using them both altogether for a while, because I was uncomfortable with either company knowing my location (even when I wasn’t using the app, in Uber’s case) and where I was going to meet people while doing my job. Paranoia? Maybe. But I’d prefer to keep my whereabouts to myself.

Now, I’m an infrequent user. Mostly airport trips at 5 a.m., or if I’m stuck in no man’s land where San Francisco’s public transit rarely runs. Call me old-fashioned, but I like using the city metro services. They’re cheap!

Q: Do you use any other transportation apps?

A: Yeah, a few. I don’t own a car anymore, so getting around the Bay Area can be a pain if you need to get out of the city. Especially if you have a 90-pound dog in tow.

If I need to drive down to Silicon Valley for interviews, I usually rent a car through Getaround, which is essentially an Airbnb for people’s cars. It’s pretty convenient, and I’ve even struck up a budding friendship with a guy on my street whose car I frequently rent!

I used Car2Go a lot in Brooklyn when I lived there. It’s basically a bunch of SmartCars scattered around the city. You find one using the app, drive it where you want to and leave it parked wherever there’s street parking that isn’t metered. It’s pretty rad.

Mostly right now I’m using an app called Transit, which gives you the best route to where you want to go, which could include combinations of public transit, biking, car-sharing and just plain old walking. Q: What is the most bizarre conversation you’ve ever had with an Uber or Lyft driver?

A: Once I had a really scary one where a guy hadn’t slept in 36 hours and was straight up going off on all this unintelligible crazy conspiracy theory talk. I definitely couldn’t wait to get out of that car. (I also reported him to Lyft.)

Other than that, I think I’ve been offered drugs once or twice. Mostly they complain about how Uber treats them poorly, even if they don’t know I’m a journalist. Probably not a good look for these companies.

Q: You spend a lot of time on social media. You use Twitter in a way that is somewhat unconventional to many Times standards. Does this help with work?

A: You mean other Times employees don’t use Twitter the same way I do? I am shocked!

I kid, of course. I am all over the place on Twitter, and use it as a kind of narrative of both my life and the things that interest me. It’s fun, stressful, anxiety-inducing and occasionally cathartic.

But despite appearances, it’s actually been a very effective tool in doing my job. I talk to a lot of people through Twitter — either in public or in private — and feel that it’s facilitated many, many connections that I would have not otherwise made were I not constantly rambling online. For source development, it’s been fantastic.

Q: Outside your job, what tech product are you and your family currently obsessed with?

A: Hmm, probably HQ Trivia, that app that’s literally a game show on your phone. My parents are even on it.

Oh, also, I’m very late to this, but I am super into my pedometer on my iPhone. Who knew counting my steps would motivate me to walk more? (Editor’s note: Many people knew this.) Q: What’s so great about them, and what could be better?

A: HQ is cool because it’s interactive, it’s live, and you can talk to people on Twitter about it while you’re playing. It’s sort of the ideal experience of real-time communicating on the internet in a legitimately fun way. The problem is, TV shows are a hits business, where one is never enough, so the creators will have to evolve their success into other shows over time.

The iPhone Health app pedometer is perfect in every way. I am such a dad.

Q: So why don’t you just buy a car? Are you waiting for the self-driving car of your dreams?

A: Between parking tickets, insurance, renting a garage in the city, a monthly payment and gas, it’s way cheaper for me to be car-free and rent only when I need one.

Maybe in 10 years it’ll be a moot point, and the streets will be filled with robot cars! I kind of hope so.