He's cooked for presidents, but lottery winner now wants to feed the poor 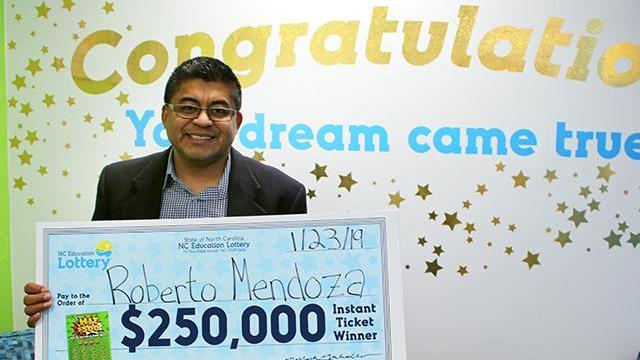 But for Mendoza, winning a $250,000 lottery prize is an experience he never imagined.

“I have never won anything in my whole life,” Mendoza said. “This is an incredible feeling. I just can’t believe it.”

He said he was following his mother’s intuition when he bought a Hit $500 ticket from the 7-Eleven on Nations Ford Road in Charlotte.

“My mom was up visiting,” he said. “She told me she had a lucky feeling and knew I was going to win the lottery, so I bought a ticket.”

“My hands started shaking when I saw the numbers,” he said. “I’ve been shaking ever since.”

Mendoza claimed his prize Wednesday at lottery headquarters in Raleigh. After required state and federal tax withholdings, he took home $176,876.

He said he plans to use the money to finish building a cafeteria in the Dominican Republic to feed the hungry.

“We feed more than 300 children through my foundation,” he said. “I know what it’s like to be hungry. I told myself when I was a teen that, if I’m ever in a position to give back, I’d do everything I can to make sure no one else has to go hungry.”