He Claimed He Caught a Record-Breaking Fish. Now He's Being Called a Liar. 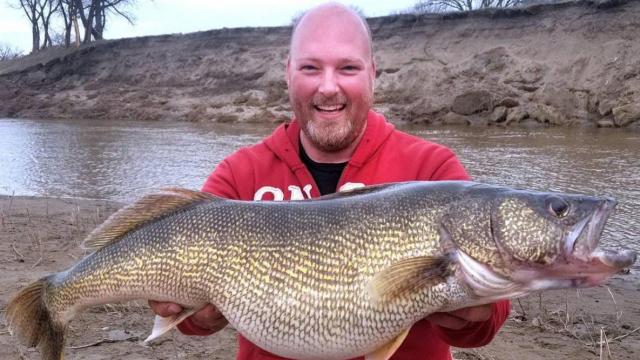 Tom Volk’s walleye weighed nearly 17 pounds and stretched more than 2 1/2 feet from nose to tail fin. It was the kind of fish that anglers spend decades seeking, the kind they almost never catch, the kind that ends up mounted in trophy rooms.

“I knew that I had just caught the state-record walleye,” said Volk, 41, who serves as a city councilman in North Dakota and works in drug prevention for the state government. “It was a dream of mine.”

But Volk does not have the state record. Instead, he has a written warning from the North Dakota Game and Fish Department. He has a collection of social media posts accusing him of being a fraudster. And he has a boat he is trying to sell because he does not care to go fishing again any time soon.

The dispute about Volk’s walleye — which became the subject of a criminal investigation, a podcast and dozens of posts on the NodakAngler.com message boards — is an only-in-2019 chapter to a generations-old argument about what qualifies as a fishing record.

Fishing, long an escape from the world’s stresses, has taken on more of its trappings. The pastime has been transformed by cellphone videos, social media debates and a growing desire to shame cheaters.

The story of the Midwest’s most debated walleye began on a Sunday in April when Volk, an angler since boyhood, heard that fish were biting on a stretch of the Heart River in Mandan, North Dakota. Along with his wife, his two young children and a friend, Volk went to the water and started casting his line into the muddy stream.

In the first 90 minutes, his group caught about 10 walleye. His children posed for photos. It was like any other weekend outing. Then Volk felt a weight on his line.

“I knew it was a big fish as soon as I set the hook,” Volk said. “It stayed down in the water, even the shallow water, and it was doing head shakes, multiple head shakes.”

When he finally pulled it to shore, Volk’s friend placed the monster walleye in a net.

“I was like, ‘Holy cow, this is state record,’” Volk said. “I’m pretty sure I dropped some foul language.”

But in North Dakota, where the Missouri River and its tributaries attract freshwater fishermen from across the country, there is perhaps no record more coveted than that of the state’s largest walleye.

“You’re always like, ‘Gosh, am I going to be that guy to hook that next big walleye?’” said Mike Peluso, a professional fishing guide in Bismarck. “It’s almost like playing the lottery.”

Within hours of Volk’s catch, word spread on fishing message boards about a giant walleye. Soon, the state’s Game and Fish Department confirmed the news on Facebook: “Congratulations to Tom Volk for reeling in a new state record walleye!” A smiling Volk was pictured, holding his prized fish, its mouth agape.

The triumph was short-lived. On NodakAngler.com, the online hub of North Dakota fishing, people questioned if the walleye had been “snagged” or “foul hooked,” meaning hooked somewhere other than the mouth. Intentionally snagging a fish is seen as unsporting. Keeping a foul-hooked fish is also a misdemeanor in North Dakota.

It did not help Volk’s case that other fish caught nearby had been hooked away from the mouth. Then a shaky cellphone video surfaced that led some to believe that Volk’s friend pulled the hook from the back of the fish, not the mouth.

“I’m skeptical,” one NodakAngler commenter said. “The video is sure making me think,” another wrote.

Volk insists that he hooked his walleye legally on a jig, but concedes he cannot prove it. He said that the fish fought him for several minutes in a manner that indicated the hook was in its mouth, though he said he never looked at the hook’s location after it was reeled in; he said he was too focused on celebrating and getting his trophy to an official weighing station.

As online blowback spread, Volk tried to make his case on NodakAngler and in Facebook posts. “I’m the lucky angler who caught the new state record walleye!” he posted on the message board. “It was caught legally in the mouth and verified by witnesses.” Bickering over fishing records is not new. A world-record smallmouth bass caught in the 1950s was the subject of dueling affidavits about whether lead weights were added before it was placed on a scale. In 1984, a near world-record bass in Georgia could not be verified because the fisherman ate it. And in North Dakota, a walleye record that stood for 59 years carried a taint of controversy, with no photos to corroborate it. At least one person claimed that the fish had been found dead, not caught alive.

But new technology and online scrutiny have transformed the disputes. In 2009, a fisherman was required to take a polygraph exam to have his world-record claim certified. (He passed.) Just this month, South Dakota officials voided their record for a channel catfish, which had stood since 1949, after studying photos and determining that the record-holder was in fact a blue catfish.

There were rumors about it “within a half-hour, 45 minutes of it being caught,” said Kent Yancey, a fishing guide based in Bismarck who said the debate about the walleye had been the most talked-about issue in angling circles this year. “Ten years ago, you might not have heard about it for a week.”

His fellow guide, Peluso, suggested that the walleye would have stood as a state record if not for the witness video and online pushback. “Let’s call a spade a spade,” he said. “If this fish was caught in 1985, nobody would know whether or not it was snagged or caught legitly.”

Amid the outcry, the Game and Fish Department opened a criminal investigation. Volk hired a lawyer and worried about the impact a criminal record would have on his career. He watched the online comments turn crude. He stopped fishing.

“They’re attacking me on every level, all because I’ve caught a walleye,” Volk said. “It’s some of the worst bullying I’ve ever seen in my life.”

In the end, game wardens compiled an 11-page report on the fish after conducting witness interviews and poring over NodakAngler message boards. The county prosecutor said he would support charges, and that his office had reached “a consensus view” that the walleye had been improperly hooked.

Timian, the chief game warden, said he was convinced that the fish was foul-hooked, but also believed that Volk might not have known about the infraction until after he left the riverbank. His department issued a written warning, disqualifying the fish from record consideration, but no criminal citation.

Volk, who said he remained sure that he acted legally, sent the fish to a taxidermist to have a replica made. Record or not, the biggest walleye in North Dakota will be remembered.

“It’s going to be the official unofficial walleye,” Volk said.