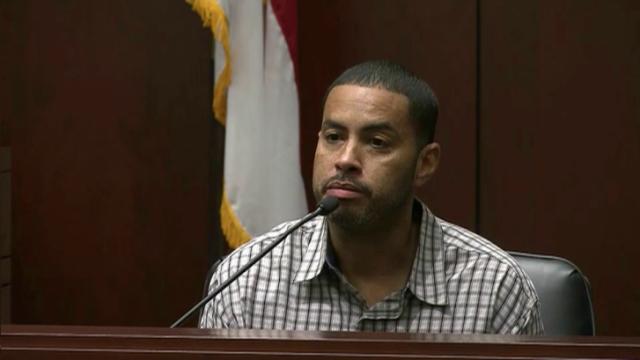 Raleigh, N.C. — A former inmate who says Grant Hayes confessed to killing his ex-girlfriend two years ago faced vigorous questioning Thursday from a defense attorney who suggested his motive for testifying was to get a reduced sentence on a federal drug conviction.

Pablo Trinidad testified late Wednesday afternoon that Grant Hayes – on trial for first-degree murder in the death of 27-year-old Laura Ackerson – told him that he lured her to his northwest Raleigh apartment under the false pretense of wanting to resolve a contentious custody dispute over their two young sons.

Once Ackerson was there, Trinidad said, Hayes said he and his wife strangled her, dismembered her body and then took a road trip to get rid of the remains.

The conversation took place in July 2011 at the Wake County Detention Center, days after Hayes was arrested. Trinidad was awaiting transfer to a Virginia correctional facility.

Trinidad – facing a mandatory minimum 100-year prison sentence for charges of conspiracy to deliver 5 kilograms of cocaine, six counts of distributing cocaine and one count of felony possession of ammunition – later pleaded guilty under an arrangement in which he agreed to testify in other cases.

Serving 21 years in federal prison, Trinidad said Wednesday that he was hoping his testimony could help him reduce his sentence even further but added that he had not been offered any deal.

"He was your meal ticket, one of them at least?" Hayes' attorney, Will Durham, asked during an aggressive cross-examination Thursday morning.

"If you want to put it in those words," Trinidad responded. "They're your words, not mine."

Durham also accused Trinidad of making up the claims, asking him if he got details about the crime from TV news reports.

"The only information I saw on the news was that he was in custody in Raleigh on charges of murder," Trinidad said. "That was pretty much it."

Once he was in Virginia, he added, he didn't hear anything else about the case.

Radisch, the state's chief medical examiner, testified Thursday that she found some evidence of possible strangulation as well as a puncture wound in the neck at the fourth vertebra of the spine

But she said because of the conditions of the remains she couldn't determine for certain if Ackerson had been strangled to death or stabbed to death.

"My final conclusion was that I didn't have enough information with the parts we received to determine the exact cause of death," she said. "I called it undetermined homicidal violence."

On cross-examination though, she added that, at the time of the autopsy, she was not aware that a Texas medical examiner had crushed Ackerson' thyroid cartilage, which was the basis for her finding of possible strangulation.

Defense attorneys contend Hayes' wife, Amanda Hayes, who was resentful of Ackerson, killed her during an argument at the Hayeses' apartment on July 13, 2011, and that Hayes was covering up his wife's actions, because he didn't think anyone would believe the attack was unplanned.

Wake County prosecutors, however, say Hayes and Ackerson were involved in a bitter child custody dispute – the motive for the crime – and that he invited her to his home for a rare mid-week visit with their 2- and 3-year-old sons.

Trinidad's testimony was the first in the trial – in its third week – that prosecutors have offered solid evidence definitively linking him to Ackerson's murder.

"He told me that she was an unfit mother. They'd been having a custody battle for some years now and that she was soliciting herself on the Internet and doing drugs, and he was tired of that," Trinidad testified. "(He) said he lured her to his apartment, and that's when him and his wife subdued her and strangled her. And later on after that, they dismembered the body."

"He already had it planned out what he was going to do," Trinidad added.