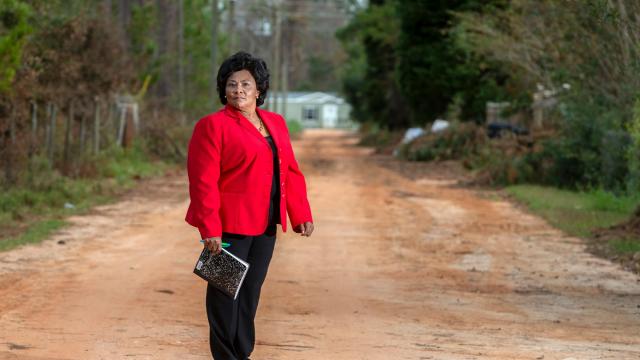 When Brenda Holt learned that the federal government planned to close her local Social Security office, she swung into action.

That field office in Quincy, Florida, served Gadsden County in the state’s panhandle, where Holt is a commissioner; closing the office would force residents who needed help managing their benefits to travel 25 miles to Tallahassee.

“We are a rural community with many seniors and a very high poverty rate, and this really angered a lot of us,” Holt said. “We really felt like our community was being dishonored.”

Along with other community leaders, Holt mounted a campaign to save the office, proposing ways to the Social Security Administration to reduce expenses. But the Quincy office closed anyway, in March 2014 — a casualty of the cuts required by eight years of congressional budget tightening. For anyone without a car, public transportation to Tallahassee is severely limited: There is a once-daily commuter bus, Holt says, and it is often overflowing with riders.

Social Security did install a video kiosk in the Quincy library. That kiosk connects benefit claimants with the Tallahassee office; today, it serves 75 to 100 people daily during library hours. But it’s not a trouble-free solution, Holt said. “We have people who can barely read because of vision problems, or hearing problems. Video is not the answer for many of these people.”

Social Security has closed 67 field offices since fiscal 2010 in rural and urban areas alike. For the public, the cuts have meant less access to field offices, and ballooning wait times in the remaining 1,229 offices and on the agency’s toll-free line. It also has meant long delays in hearings on disability insurance appeals and in resolving benefit errors.

From 2010 to 2018, Congress reduced the agency’s operating budget 9 percent in inflation-adjusted terms; at the same time, the number of beneficiaries rose 17 percent, according to agency data.

The agency’s budget is increasing now, and Mark Hinkle, a spokesman, said it will enable Social Security to reduce its backlogs. “We are working to modernize our IT infrastructure, addressing customer service needs, and enhancing online options for the public,” he said.

In March, Congress made a down payment on reversing years of cuts. Lawmakers ignored the Trump administration’s request for a small increase in fiscal 2018, instead raising the agency’s administrative budget by $480 million, or 4.6 percent. And in September, Congress overrode the administration again, approving a $40 million increase in Social Security’s operating budget for 2019, rather than the cut of more than $400 million proposed by the White House. For fiscal 2019, the agency’s operating budget is $11.1 billion.

These numbers are expected to grow quickly; as the nation ages over the next two decades, the agency estimates its beneficiary rolls will increase 43 percent.

The backlog in appeals cases for Social Security Disability Insurance has swollen in the past eight years. The average wait time for a hearing decision on an appeal in fiscal 2018 was 591 days, 39 percent longer than in 2010, though a slight decrease from 2017, agency data shows.

Those delays are much more than an inconvenience. “These long wait times are devastating to people with severe health impairments,” says Lisa Ekman, director of government affairs for the National Organization of Social Security Claimants’ Representatives, a group of lawyers that handles disability cases. “Sometimes they exhaust their savings and declare bankruptcy, and sometimes they lose their homes. Or, they can’t afford their medical treatment and get sicker — sometimes they die.”

In fiscal 2016, the agency said, 9,714 people died while waiting for an appeal decision.

The service problems affect many people attempting to transact business with Social Security.

The average wait time to see a claims agent in field offices was 26.5 minutes in fiscal 2018 — 37 percent higher than in 2010, according to the National Council of Social Security Management Associations, an organization composed of field office and telecommunications service center managers. And the wait times can be much longer.

“People line up early at Social Security offices around the country,” said Christopher Detzler, who manages a field office in Vancouver, Washington, and is the council’s immediate past president. “Sometimes the lines wrap around the building, even for offices with more reasonable wait times.”

Contacting Social Security through its toll-free number can be difficult, and 15 percent of callers heard a busy signal when calling during fiscal 2018, according to the council. (Appointments for phone conversations or in-person visits can be scheduled in advance by calling the toll-free number or a local field office.)

Most of the workers who have departed were among Social Security’s longest-serving employees. All 3,400 field office staff reductions since 2010 have come through attrition, Hinkle said.

“It’s not just lost head count, but lost institutional knowledge,” says Nancy Altman, president of Social Security Works, an advocacy group, and a member of the Social Security Advisory Board, a bipartisan, independent federal agency that advises the government on Social Security policy and its administration.

“Every year, the Social Security Administration is being asked to do more with less,” said Kathleen Romig, senior policy analyst at the Center on Budget and Policy Priorities. “As a result, many of their long-term priorities are suffering, such as working down the very large backlog in disability appeals, and modernizing their technology. They can really focus only on getting checks out and even there, they are showing real signs of strain.” Social Security serves 1 million more beneficiaries each year. If its budget had kept pace with the Consumer Price Index since fiscal 2010, it would be $1.3 billion higher in fiscal 2019 than the $11.1 billion that has just been allocated, Romig said. And that is a conservative figure, because costs for big items, like office rent and health care, tend to rise more quickly than the CPI.

Social Security is hardly the only government agency with budget problems. Since the 2011 Budget Control Act, a broad range of programs have been affected.

But Social Security benefits themselves are not subject to the ongoing budget wars fought in Congress — by law, benefits have been off-budget since 1990.

Social Security has responded to its customer service challenges by ramping up automation and use of the internet. It has sharply reduced the number of annual benefit statements sent by mail, encouraging workers to sign up for online accounts. The agency also has begun replacing crash-prone, 30-year-old computer systems.

Its long-term strategy states that by 2025, most transactions should be online, and in-person services be limited “to meet the needs of vulnerable populations.”

The technology initiatives have already helped ease backlogs; 39.5 million people have created online accounts. In fiscal 2018, 55 percent of retirement and disability claims were filed online, up from negligible numbers a decade ago. But a report last year by the Government Accountability Office found that the spread of online services has been limited by factors like uneven computer literacy and non-English speaking or homeless populations.

And technology-driven customer service requires human intervention. For example, employees sometimes need to help claimants correct errors or make decisions. “We see a lot of problems with people filing on the internet for retirement benefits,” says Jill Hornick, a union representative at the American Federation of Government Employees who works at a field office in Chicago Heights, Illinois.

Digital divide issues also come into play. “Older low-income people usually don’t have the ability to interact with the agency online,” says Daniela de la Piedra, a lawyer with AARP/Legal Counsel for the Elderly in Washington, who represents low-income beneficiaries. “This is the population that goes into the local Social Security office and does business face to face.” Slow processing of paperwork can keep beneficiaries in limbo for months, or even years, waiting for mistakes to be corrected. The number of pending actions at payment centers — the agency’s back-office operation — has soared 80 percent since 2010; the backlog stood at 3.19 million items pending action in fiscal 2018, according to the council of associations.

People deserve better, Holt of Gadsden County said. “This isn’t a handout. People have worked hard to earn their Social Security benefits. If you pay taxes, you expect to get services.”