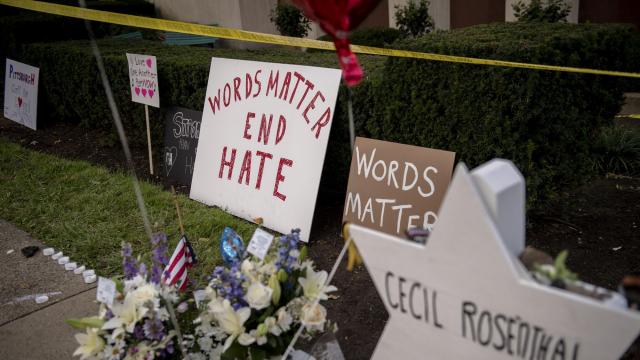 Hate crime increased 17 percent last year from 2016, the FBI said Tuesday, rising for the third consecutive year as heated racial rhetoric and actions have come to dominate the news.

Of the more than 7,100 hate crimes reported last year, nearly 3 out of 5 were motivated by race and ethnicity, according to the annual report. Religion and sexual orientation were the other two primary motivators.

In addition to the tense political climate, the increase also points to a growing awareness among various law enforcement agencies of the importance of identifying and reporting hate crimes to the FBI.

Reporting hate crimes to the FBI is voluntary. Last year, roughly a thousand more agencies submitted data than those that did the previous year.

The FBI said it planned to train law enforcement officers next year on how to do a better job of identifying and reporting bias-motivated incidents. The Justice Department has also launched a new website on hate crimes.

“This report is a call to action — and we will heed that call,” Matthew Whitaker, the acting attorney general, said in a statement. “The Department of Justice’s top priority is to reduce violent crime in America, and hate crimes are violent crimes. They are also despicable violations of our core values as Americans.”

Black people accounted for nearly half of hate crime victims last year, according to the FBI. Of those targeted based on religion, 58 percent were Jewish.

A man accused of fatally shooting 11 worshippers at a synagogue in Pittsburgh last month had taken to social media to accuse a Jewish organization that helps to resettle migrants of bringing “invaders” to “kill our people.”

Much of the country’s political discourse in recent years has been fueled by deep racial divisions.

“For the NAACP, we began to see this during the presidential election in 2015,” said Derrick Johnson, president of the organization. “The level of tribalism that was being fueled by presidential candidates, the acceptance of intolerance that has been condoned by President Trump and many others across the country has simply emboldened individuals to be more open and notorious with their racial hatred.”