The Harnett County Sheriff's Office announced on Monday that it had identified the remains of a man missing for almost two decades. The long tale involves a fire in an abandoned home, a skeleton found by children playing, grant money and genetic research.

Sheriff Wayne Coats said the man known only as Cameron Doe – named for where his remains were found – is Michael Joe Wesley Baker, who was 24 when he disappeared. Baker's sister reported him missing in 2007 to police in Sanford, but his family had lost touch years before.

In 2005, three boys playing near an abandoned house in Cameron found his bones. Jacob Campbell told WRAL News, "I thought it was, like, a fake skeleton that someone just threw up there, but then I got to looking at it and saw that it was actually a real skeleton, and we went and got my mom."

Baker is the first success story for the North Carolina Cold Case Initiative, a group that combines anthropology, investigative work and genealogy to match unidentified remains with the missing and the murdered.

"Every individual, including after death, has a right to a personal identity," she said.

Leslie Kaufman, a freelance forensic genealogist, works with Ross. "We're using DNA to trace their family roots, their history and to come to a conclusion," she said.

North Carolina Cold Case Initiative started with 13 cases. Baker is the first person they have identified.

"It's just the first step," Ross said. "We are so excited that this means we may make more breaks on the other 13 cases we have."

NamUs, a national information clearinghouse and resource center for missing, unidentified, and unclaimed person cases, lists more than 120 cases of unidentified human remains in North Carolina, dating back to the 1960s. 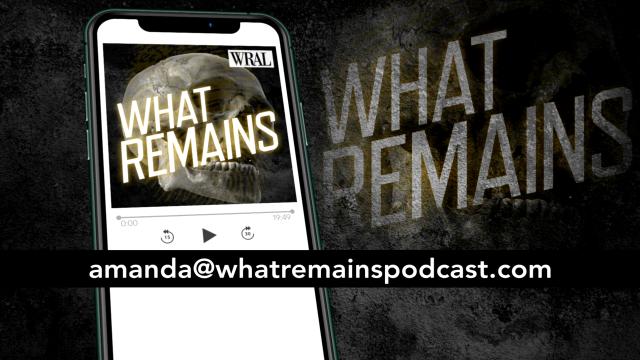 The work of the North Carolina Cold Case Initiative to identify unidentified remains in the Tar Heel State is the subject of an upcoming podcast. "What Remains" is written and hosted by Amanda Lamb and produced as part of the Capitol Broadcasting Podcast Network. If you’d like to be the first to know when it launches, email