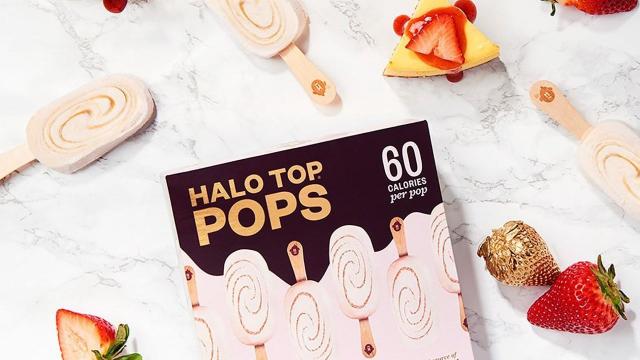 Woolverton says the pops are "very snackable," unlike the pints, which are "made for volume eating."

Each Halo Top pint displays the number of calories on the front of the package. Customers who want to eat the entire pint in one sitting know immediately how many calories they'll be consuming.

So the pops make for a "pretty cool juxtaposition" with Halo Top's core product, he said.

Halo Top pops hit some retail shelves and the company's national online store on Tuesday. Shoppers will first be able to find them in Midwest states, Texas and California. Later, the pops will come to the Northeast and hit some national retailers this spring.

Woolverton attributed the turnaround to three things: Flashier, Instagram-friendly packaging, a new recipe and a flurry of good press, including a GQ article penned by a journalist who ate nothing but Halo Top ice cream for 10 days.

Now, the company's growth is more modest. Last year, unit sales were up 3.7% but dollar sales were down compared to the prior year. Halo Top says that's because of more competition.

"Right now, we probably have some 20 knock-off brands," Woolverton said. "From small companies to the big big guys coming out to compete."

To cope with the increasingly competitive market, Halo Top wants to make sure it is "best in class," Woolverton said. He wants to increase customer awareness of the brand and focus on international expansion and on new products like the pops. They give Halo Top more space on the freezer shelf.

In general, big companies are paying more attention to the growing health trend, scooping up successful startups and starting accelerator funds to learn how to keep up with the trend themselves. Woolverton said Halo Top is focused on remaining private for now, but the company is not entirely ruling out a merger or acquisition.

He's not worried that the health trend will go away. "Consumers are just so much more knowledgeable about the right way to eat," he said. "I can only see that growing."