Halloween on Franklin Street: crowds and creativity for Chapel Hill

Halloween on Franklin Street is one way to make sure you see the craziest costumes and the biggest Halloween fans this year. But unless you live in Chapel Hill, the town doesn't want you to visit for Halloween night.

A spokesman for the town of Chapel Hill said 2007's crowd brought concerns of gang violence, alcohol poisoning and crime, so the Homegrown Halloween celebration tries to bring the event back to its small-town roots. Last year, 27,000 people celebrated on Franklin Street. 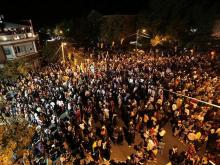 Despite the town's good intentions, many students at UNC-Chapel Hill wish the town didn't discourage outsiders from celebrating Halloween on Franklin Street.

"If people are willing to make the trip to Chapel Hill for Halloween, why should we stop them from celebrating here?" UNC-Chapel Hill senior Joey Patterson said. "There's other ways of making sure everything's safe other than trying to keep people out."

However, some students appreciate the town's efforts to make the event safer.

"Balancing fun and safety is tough," UNC-Chapel Hill junior Ashcon Livingston said. "But I think people have had fun, even if the number of people on Franklin Street has gone down."

But some people who do not reside in Chapel Hill don't agree with the town's efforts to keep outsiders from celebrating on Franklin Street.

"It's Halloween," said N.C. State student Greyson Smith, who plans on celebrating Halloween in Chapel Hill. "You're going to be dealing with lots of drunk people in one place. By creating restrictions on the crowd number, you're not preventing the possibility of accidents, you're just making it easier to find the culprit."

"It's a tradition of more than 30 years. Don't change it, pat people down for real weapons, have EMS on the scene, if you're so worried about people getting hurt," Smith said. "But don't exclude people from coming to participate." 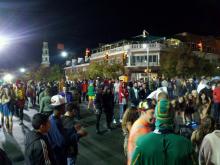 In addition to closing off Franklin Street and several side streets for celebrations, the town of Chapel Hill will restrict driving access into downtown, will not have special event parking or shuttles and close to no parking will be available downtown. Franklin Street will begin to be reopened around 11:30 p.m. on Wednesday. Restaurants and bars will be required to charge a $5 cover and will close to new patrons at 1 a.m.

In the end, for those who can make it onto Franklin Street, Chapel Hill's Homegrown Halloween celebration is all about looking for the best costumes.

"I like to go because I love to see all the costumes, see how creative people get," Smith said.