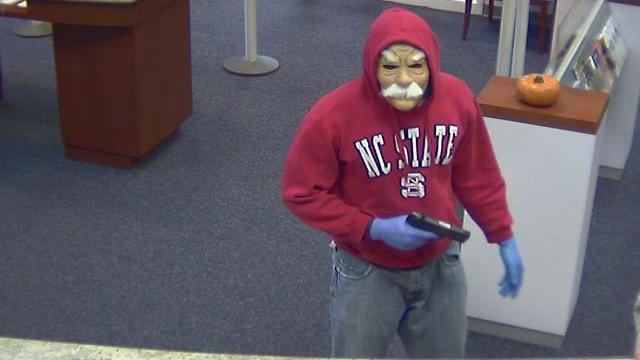 Chatham County sheriff’s investigators released several high-quality images taken from the video in the hopes of catching the two men, who remained at large following the 9:41 a.m. heist at PNC Bank on Governor’s Drive.

Investigators said they were using police dogs to track the unidentified men and found a money bag a short distance away from the bank. They did not disclose how much money was taken in the robbery or whether any was recovered in the bag.

Chatham County authorities used the 911 system to alert nearby residents and businesses by phone about the robbery. They said Willow Oak Montessori School and Carolina Meadows, a retirement community, went on lockdown after getting the automated call.

Anyone with information about the crime is asked to call the Chatham County Sheriff's Office at 919-542-2911.

The North Carolina Bankers Association is also offering a reward for information leading an arrest. Contact the FBI confidentially at 1-800-209-2293 or submit a confidential tip through the FBI website.