Hagan goes on offense in advance of debate 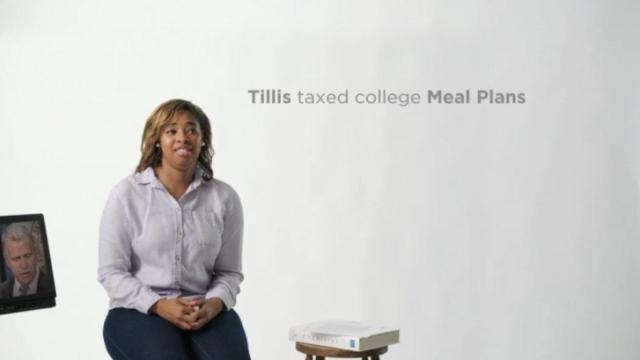 Raleigh, N.C. — U.S. Sen. Kay Hagan launched a series of campaign ads Wednesday morning that feature teachers and students criticizing state House Speaker Thom Tillis for his work at the General Assembly – hours before the pair are scheduled to face off in the first of two scheduled debates.

Tillis, a Republican, aims to unseat the first-term Democrat. The pair are running neck and neck in the polls.

The ads are "part of a six-figure buy" that will run across the state, according to Hagan's campaign.

Much as Tillis has aimed to tie Hagan to a Congress and president that have flagged in popularity, Hagan's ads seek to tie Tillis to a General Assembly in Raleigh that has been a focus for controversy and has proved unpopular.

The four ads the campaign publicized Wednesday all focus on cuts to education spending made by legislative Republicans over the past four years, including paring back textbook funding and cuts to teaching assistants.

Later in the day, Tillis' campaign responded to the ad.

"Kay Hagan is hitting the panic button and running a negative campaign because she can’t defend her record of voting with Obama’s failed liberal agenda 95 percent of the time," said Tillis spokesman Daniel Keylin. "The only thing she can campaign on are shameful distortions and false attacks already debunked by fact checkers. Thom Tillis cut taxes and created opportunities for every North Carolinian taxpayer, which has helped middle-class families struggling under the Obama-Hagan economy get back on their feet."