In Jacksonville, the $1 Billion-a-Year World of Esports is Rocked by Gunfire 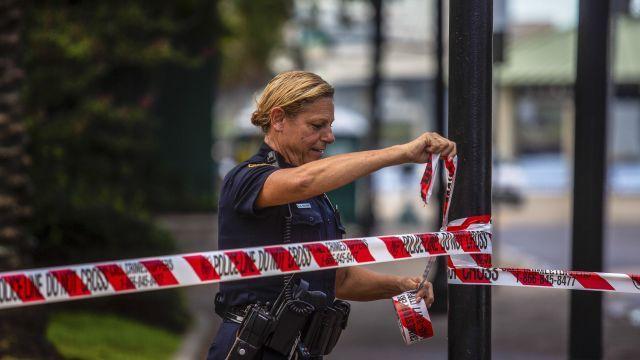 JACKSONVILLE, Fla. — The offseason had just ended. The competitors, the finest players of a football video game, had gathered on the riverfront in Jacksonville for two days of animated battle. The weekend’s tournament was their first sanctioned chance to show which game-winning moves of the “Madden” franchise they had unlocked.

Pride and cash prizes were their goals.

Then came the gunfire. Two players were killed. Eleven other people were injured, 10 by bullets. And the gunman, a 24-year-old player from Baltimore, was dead.

Sunday’s fatal rampage was yet another mass shooting in a state already familiar with the grim customs that come with bursts of gunfire. But the attack has also cast a light on the rites and rigors of competitive esports, a close-knit, screen-named world of streaming and sponsorships, supersized rewards and swollen egos.

“The suspect clearly targeted other gamers,” Sheriff Mike Williams of Jacksonville said of the gunman, identified as David B. Katz. He had been defeated in the tournament earlier in the day, then later pulled out a handgun. “The suspect walked past patrons who were in other parts of the business and focused his attention on the gamers,” the sheriff said.

In an era when many video games are criticized for gratuitous carnage, the “Madden” franchise, named for the celebrated football coach and commentator John Madden, has been among the sports games that stood apart. The most competitive players are often former athletes themselves and have elevated a game that has been a hugely popular form of entertainment in college dorms and bars across the country.

“The ‘Madden’ player is a different type of guy: You’re half a jock and half a gamer,” said Chris McFarland, a 31-year-old player from Philadelphia who competed in Jacksonville over the weekend. “That’s kind of in between two different demographics as far as the male human is concerned. You’re either a jock playing sports or you’re a gamer in the house playing games. It’s kind of hard to balance out both of them, but that’s essentially what a ‘Madden’ player is, and when you get to this level, you’ve got to put a lot of time and energy into it.”

McFarland was among the players who came to Jacksonville for the start of a monthslong circuit scheduled to stretch from Washington’s suburbs to Orange County, California. On Monday afternoon, he sat in a wheelchair at Memorial Hospital in Jacksonville, recovering from a grazing bullet wound to the head.

“You hear the first pop, and you don’t know what exactly — you would never think it’s a gunshot,” he said. “That’s when a bullet grazed my head, and that’s when I fell to the ground and looked back and I saw the guy. I’ll never forget the image of him just holding a gun, just unloading on a group of my friends, man.”

Katz was the third fatality, killed by a self-inflicted gunshot wound. He was armed with two legally purchased weapons but used only one handgun, police said.

Sunday’s attack was unlike any other episode in the evolving and rising world of esports, an industry projected to generate close to $1 billion in revenue this year, according to the market research firm Newzoo. The “Madden” franchise, in which players use their game controllers to call plays and direct running backs, is among the nation’s most popular video games, but it has not been the epicenter of the esports universe. Recently, that honor has belonged to “Overwatch,” a team-based first-person shooter game developed by Blizzard Entertainment. Franchise fees for some teams in the Overwatch League were reportedly as high as $20 million.

Still, this weekend’s tournament in Jacksonville was an important one on the “Madden” circuit, a regional qualifier for a major event and a chance for top players to debut their newfound mastery of a game whose most recent iteration was released just weeks ago.

Some of the players are full-time competitors and personalities, drawing huge audiences while seeking vindication, pleasure and no small amount of money. For sports fans, the games can offer a certain solace when their own favorite teams prove frustrating.

“I’m a huge Eagles fan, so when you watch the Eagles, you get mad: Don’t punt. Pass the ball. Run the ball,” McFarland said. “But when you’re a ‘Madden’ player, you have all that control. That’s what originally draws you to ‘Madden,’ and I remember playing my friends and losing to them. That made me want to be better than them — and it grew and grew and grew to the point that you become one of the best players in the world.”

McFarland said that in recent years, he has averaged about $75,000 a year from playing “Madden,” and thanks to the game, he was at this year’s Super Bowl in Minneapolis when the Eagles won their real-life title. He traveled regularly on the circuit, sometimes sharing an Airbnb with fellow players — an Xbox, of course, promptly connected for practice games.

Such was the backdrop over the weekend as players convened in and around the Jacksonville Landing, a sprawling riverfront development in the downtown of Florida’s most-populous city. The complex features the GLHF Game Bar, a popular hangout that borrows its name from a common greeting in gaming: “Good luck, have fun.”

Shay Kivlen, a “Madden” gamer known as “Young Kiv,” had come up short not long before the shooting began on Sunday, retreating to a hotel room 15 minutes after being eliminated from the tournament. He switched on a live stream to watch Clayton, his best friend, in action. At some point, a red dot appeared on Clayton’s shirt — it later would prove to be a laser sight — and then Kivlen heard gunshots.

He began a series of panicked calls. One friend, he recalled on Monday, finally answered the phone. He was hiding in a bathroom at the Jacksonville Landing with about 30 other people.

“He was crying,” Kivlen said. “He told me he thought Trueboy — Elijah — was dead. I couldn’t believe it. I was like, ‘Are you sure? Are you sure?’” Theirs was a friendship forged like many others in the realms of “Madden” and esports. They met online about five years ago, when Kivlen was a junior in high school who had hurt his arm playing baseball and was seeking a new pastime. Although Clayton lived in California and Kivlen in Seattle, they eventually met in person and became the kind of friends who texted each other on a daily basis, often for hours.

“That was one of my best friends in life — not just 'Madden,’” said Kivlen, a prolific player who estimated he had won about $140,000 last year. “He was one of the nicest, most genuine, most real, hardworking individuals I’ve ever met. If he was happy, you knew he was happy — like, there was no faking it.”

Robertson, the other player killed, was regarded as one of the kindest in the hypercompetitive “Madden” sphere. Because of poor internet service in his part of West Virginia, Robertson did not have the online presence of some of his rivals, McFarland said, but showed up for tournaments “always with a smile, never anything bad to say about anybody.”

Although it is a community that thrives on a masculine vibe and the high energy of football, players describe “Madden” participants as competitive but friendly. Damon Kirk, a player from Detroit, said one competitor who recently married had drawn the majority of his groomsmen from his “Madden” crew, which is made up of players who attend tournaments together and play each other often.

Kirk said he had seen arguments break out at tournaments, but never fights, adding, “There’s always been handshakes and high-fives after the games.”

But Katz was never part of the congenial groups that socialized after the events. He was one of eight finalists in the Madden 17 Club Series tournament in Burbank, California, last year, representing the Buffalo Bills after completing a long-shot, 82-yard touchdown pass as time expired during a tournament in Buffalo. A preview on the EA Sports website — since deleted, but available in a cached version — called his last-minute victory “the most exciting moment in all the 2017 NFL Club Series Championships.”

After Katz’s win in Buffalo, the Twitter account for the Bills posted an image of Katz posing with Cyrus Kouandjio, a former Bills player; he appeared expressionless. He was interviewed after the win just as a quarterback on the field would be, discussing his gameplay strategy with Steve Tasker, a former Bills player and current announcer.

Katz lost in the quarterfinals of the tournament in Burbank, which had a $50,000 prize pool. Clayton was one of the other competitors in the quarterfinals, though Katz and Clayton did not compete against each other, according to a bracket on the EA Sports website.

Dennis Alston, a competitor at Sunday’s event in Jacksonville, told a television station in Jacksonville that he and one other player had defeated Katz in this weekend’s tournament and that neither had been shot. After beating Katz, Alston said, he went to shake his hand.

“He just looked at me,” Alston said. “He didn’t say anything.”

“He never tried to be social with anyone,” Kivlen said, adding that Katz appeared to wear the same outfit on Saturday and Sunday, along with a hat and sunglasses. Katz went by the moniker “Bread.”

“He’s not here to make friends. He’s all business,” said the announcer in a 2017 tournament in which Katz participated. “He’s focused. And to even get him to open up to talk to you about anything, it’s like pulling teeth.”

Katz had been hospitalized in psychiatric facilities twice as an adolescent, according to records in his parents’ divorce case reviewed by The Associated Press.

He played video games obsessively as a youth, sometimes refusing to go to school or bathe, his mother, Elizabeth Katz, told the court. She said she sometimes had to take away his gaming equipment. “His hair would very often go unwashed for days. When I took his gaming equipment controllers away so he couldn’t play at 3 or 4 in the morning, I’d get up and find that he was just walking around the house in circles,” she said, according to a transcript included in the case file.

In a statement on Monday, Andrew Wilson, the chief executive of Madden’s developer, said the company had canceled remaining qualifier events “while we run a comprehensive review of safety protocols for competitors and spectators.” At Memorial Hospital, hours before both his discharge and Wilson’s announcement, McFarland was not sure when he would play again.

“This is the darkest thing that’s ever happened to ‘Madden,’ obviously,” he said. “I stream full-time pretty much, so when do I start to stream again? I don’t know what to do.”