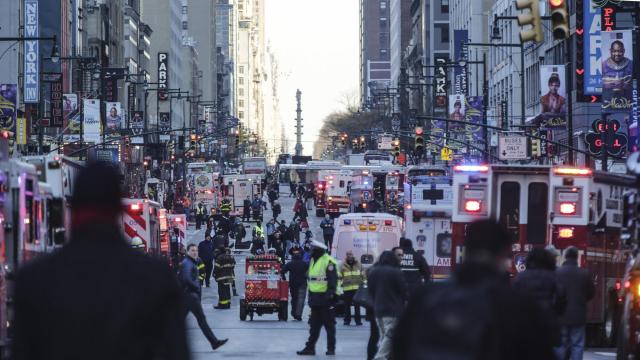 NEW YORK — A man who told the police he was inspired by the Islamic State when he detonated a pipe bomb last year in a crowded subway corridor near Times Square was found guilty of federal terrorism charges Tuesday.

The verdict came after a weeklong trial in which jurors were shown videos that tracked the man’s journey from his Brooklyn apartment until the moment of the blast.

The would-be suicide bomber, Akayed Ullah, 28, a Bangladeshi immigrant, was seriously injured when his makeshift weapon malfunctioned Dec. 11, and at least one person near him was wounded by shrapnel. The explosion caused panic during the early morning rush, filling parts of the nearby Port Authority terminal with smoke and sending thousands of commuters fleeing.

Throughout Ullah’s trial in Manhattan, the defense never disputed he had set off a bomb. Not only did the government have video footage of Ullah as he was thrown to the ground by the force of the blast, the authorities also found bomb components in his apartment. Ullah also admitted responsibility for the attack during a four-hour interrogation at Bellevue Hospital Center, a New York police detective testified.

Ullah was convicted of using a weapon of mass destruction, bombing a mass transportation system and other counts. He could face life imprisonment when he is sentenced by Judge Richard J. Sullivan on April 5.

The bombing was the first attempted suicide attack in New York City since Sept. 11, 2001, and it came just weeks after another man whom the authorities say also admitted to being inspired by the Islamic State drove a truck down a crowded Hudson River bike path, killing eight people.

After the jury had left the courtroom, Ullah interrupted the proceedings, addressing the judge from his chair at the defense table.

“I didn’t do it for ISIS group, your honor,” he said, complaining that the government was “trying to put me in the group, which I don’t support.” He said he was “angry with Donald Trump” because he had said he would “bomb the Middle East.”

Sullivan told Ullah that the jury had returned its verdict and said that he should consult with his lawyers about whether it was advisable to speak.

Government officials in New York praised the verdict. Geoffrey S. Berman, the U.S. attorney in Manhattan, said Ullah’s “sinister purpose was to harm and terrorize as many innocent people in his path as possible, by using deadly violence to make a political statement.” He added, “His purpose failed.”

The police commissioner, James P. O’Neill, said the verdict clearly demonstrated that New Yorkers “will never be deterred by anyone who seeks to sow fear in our city.”

The jury had deliberated for more than five hours over two days when the jurors sent a note: “Judge may we please take a 15 min break? We need brain space, a cigarette + fresh air. PLEASE!!”

Roughly an hour later, the jury returned its verdict, unanimously finding Ullah guilty on all six counts against him.

One juror, Linda Artis, 38, a seasonal worker from Manhattan, said that although she ultimately concurred with the other jurors, she was left with questions.

She added that she believed that had Ullah testified, he might have helped his case.

Ullah, an electrician who lived in Brooklyn, spent a year plotting his attack, a prosecutor, George D. Turner, told the jury in the government’s closing argument Monday. “He was cold and calculated,” Turner said.

He said all Ullah needed to do to detonate his bomb was touch the loose ends of a wire on the device to a 9-volt battery in his pant pocket.

“He acted as the trigger, the switch — he made himself part of the bomb,” Turner said.

Ullah’s federal defender, Amy Gallicchio, did not contest that her client had set off the bomb but argued that Ullah was trying to kill only himself and not others. “He wanted to die,” she said. “He wanted to take his own life. And only his life.”

She said Ullah had been influenced by “images and messages that distorted Islam.”

But another prosecutor, Shawn G. Crowley, countered in a rebuttal that the defense’s suicide argument was nonsense.

“The defendant detonated a shrapnel-filled bomb in the middle of the busiest subway station in the United States during rush hour,” Crowley said. “He did it to terrorize, to injure and kill.”