GUEST COMMENTARIES: 'Rally for Respect' - What they're saying around N.C. 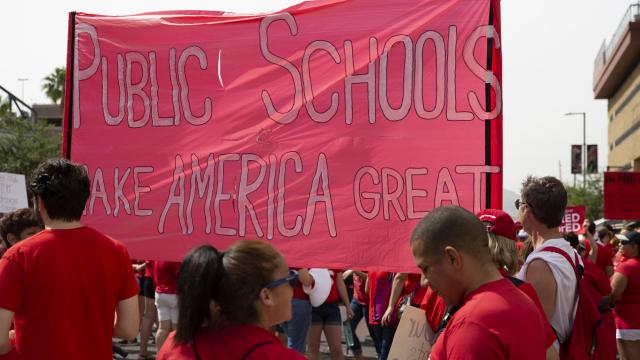 EDITOR'S NOTE: Thousands of teachers and others frustrated over the neglect of North Carolina's public schools will come to Raleigh Wednesday to voice their concerns to the General Assembly. Commentaries about education and teacher-led actions have dominated opinion pages in newspapers around the state. Below are excepts, with links to the full text, from a few.

WINSTON-SALEM JOURNAL: Stand with teachers
It’s an understatement to say that our schools have not been supported as well as they should have been over the last decade — longer, really. Teachers and students have to deal daily with crumbling school buildings, out-of-date textbooks and a lack of other resources. Our legislature has prioritized tax cuts for the wealthy over preparing the next generation to take the reins and lead our state into success. … We know that cancelling classes wasn’t an easy call for local school officials. ... But it was the right decision. … We know our local officials do take the needs of our teachers and students seriously. Raleigh should know as well.

DURHAM HERALD-SUN COLUMN: TAYLOR SCHMIDT & MORGAN CARNEY - Charter school teachers: ‘We won’t be a Trojan Horse for dismantling public schools’
Central Park School for Children in Durham decided to close our two public charter campuses May 16 so we can stand with North Carolina public schools and public school educators in Raleigh. … While teachers across North Carolina are supporting their students with creativity and passion every day, our state does not provide the resources for public schools to provide all students with this type of transformative learning. … Students of color comprised 81 percent of the demographics of Durham Public Schools in 2013, while students of color at Central Park comprised only 29 percent of the student population. Whereas 66 percent of students in Durham Public Schools were eligible for free and reduced lunch, only 7 percent of CPSC students were eligible for the program. This realization led to greater clarity: regardless of our intentions, we had become part of the problem of school resegregation. We petitioned the state to become the first charter school to give weighted lottery preference to economically disadvantaged families.

We have changed our policies to provide free and reduced-price lunches and transportation assistance. While there is more work to be done, each year the socioeconomic diversity of our student body better reflects the strengths found in the rich diversity of our community and delivers on the mandate for N.C. charter schools to provide increased learning opportunities for those most in need. … We cannot ignore the problems in our state’s charter policies. To our colleagues in public charter schools across North Carolina, we call on you to join us May 16 and beyond to strengthen our public schools and to demand policies that grant every student in North Carolina access to a world-class education. To the North Carolina General Assembly, we will act to hold you accountable to the original intention of public charter schools. And to our colleagues in public schools across this state, know that on May 16 and each day to follow, we will be standing with you.

CHARLOTTE OBSERVER: CMS is giving teachers a day off to protest in Raleigh
It's no secret that school officials across the state would like to see N.C. lawmakers find more money for teachers. Despite all the backpatting from Republicans for raising teacher pay recently, the state still ranks 37th in the country. School officials, and most everyone else, know that paying teachers more would keep them in the classroom instead of encouraging them to leave for other states or other careers. It also would make them happier, which is good for everyone, including our children. … To that end, the protest itself is important. Regardless of whether it results in legislative action — as protests did in Oklahoma and Arizona — allowing teachers a penalty-free day in Raleigh gives them an opportunity to be a part of something bigger instead of feeling isolated and frustrated at home. It's one thing for CMS Superintendent Clayton Wilcox and the school board to voice their support for employees. It's something different to show you care, especially when doing so might be inconvenient for many.  That's what a good boss does.

GREENSBORO NEWS & RECORD: Teaching a lesson
We wish school were in session for our students, because that would mean teachers wouldn’t be feeling the need to provide a public display to those who develop the pay scales that taxpayers ultimately underwrite. Teachers know the equation, though: Legislators cut taxes for corporations and wealthy citizens, which restricts (to use a kind word) the cash available for public education and salaries. The possibility of this protest and assembly making any sort of desired impact on legislators appears remote.

There is reason to wonder if legislators even will look out their windows and listen to what teachers are telling them about the state’s ranking 39th nationally in per-pupil spending and 37th in teacher pay. Senate leader Phil Berger (R-Rockingham), arguably the most powerful person in Raleigh, told The News & Observer about the protest: “Teacher strikes are illegal in N.C., and in some respects what we’re seeing looks like a work slowdown, and looks like a fairly typical union activity, and the people of N.C. don’t support that sort of action.” There could be a semantic argument that Wednesday’s presentation by teachers would be “union activity.” Republicans also have labeled this demonstration as “Teacher Walkout Day.” Organizers are calling it “March for Students and Rally for Respect.” We have our own term: a day of learning. Listen up, class.

WILMINGTON STAR-NEWS: Protesting teachers left with few other options to be heard
We find it hard to blame the teachers, who have been peaceably complaining through proper channels for years. They have plenty of legitimate grievances. When the N.C. Association of Educators (it’s not a union; collective bargaining by government workers is not allowed in N.C.) marches on the Legislative Building in its “Rally for Respect,” maybe somebody will finally listen to them. … While teachers’ pay is up, the nonprofit Center on Budget and Policy Priorities reports that per-pupil spending in North Carolina is down 12.2 percent from pre-recession levels as education spending has not kept up with the state’s brisk population growth. ...

The legislature slashed some 7,500 teacher assistant positions, thus loading more work on the remaining teachers. Many textbooks are old and woefully out of date and it’s common knowledge that teachers routinely use their own money to buy classroom supplies. … Frankly, we’re not happy that school is going to be disrupted. ... We believe it would help their cause tremendously to focus on how low pay and lack of respect and appreciation of their skills primarily hurt students. Our schools have problems. And, yes, it’s going to take money to fix a lot of them. When was the last time a private company said they were going to take their performance to a new level without significant investment?  Our legislators need to do more to ensure we have excellent schools. Maybe this march is what it’s going to take.