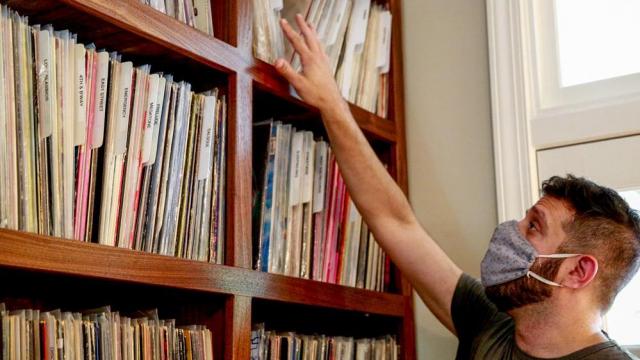 Chapel Hill, N.C. — Ben Alschuler steps over the children’s’ toys and books sprinkled across his living room floor on his way to another room.

As he enters, he waves at the rows of multicolored album covers stacked floor to ceiling in two cabinets against the wall. Between the shelves sits a long, polished counter, like the dashboard of a spaceship. Two turntables flank a panel of switches and knobs connected to speakers below.

Alschuler climbs a step ladder to reach a record from a high shelf.

“’I made this like a mini-night club, which is unusual for a house,” he says.

Alschuler, who lives in Chapel Hill with his wife and two young children and grew up with cassettes and CDs, said records were his parents’ hobby. Now, Alschuler’s kids could say the same about their dad.

Alschuler pulled a bright yellow and blue album from his kids’ shelf: Sesame Street’s “C is for Cookie,” with Cookie Monster grinning on the cover. 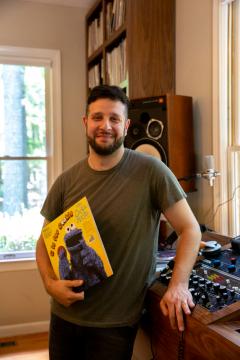 No longer DJing for just college friends, Alschuler, 38, emcees dance parties for his 2- and 5-year-old sons. His turntables are dance-proof; they sit on springs that absorb the bounce of tiny feet as two generations of Alschulers share a nearly century-old music experience.

Vinyl was always there, but ebbed in popularity as new mediums were invented. Cassettes and CDs transformed music portability. iPods and digital streaming made it personal. But vinyl is on the upswing, and it’s bringing North Carolina enthusiasts young and old with it into the future.

Vinyl album sales in the U.S. have grown every year since 2006, according to data from Nielsen Music’s 2019 report. Though records still represent a fraction of all music sales, its impact is major for the communities driving the growth. 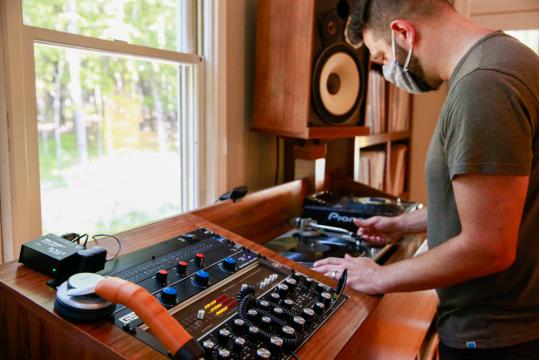 Michael Fremer built a career on vinyl, writing columns for various music magazines and eventually becoming the editor of Analog Planet, an online source of equipment reviews and vinyl commentary.

Record collectors across North Carolina may not know each other, but many know Fremer, who is regarded by some as the high priest of the church of vinyl. Analog Planet has 400,000 monthly page views, and almost every article is followed by a vibrant thread of reader comments.

The vinyl community in North Carolina is vast. Social media, like Facebook groups, makes it easy for collectors of various ages and experience levels to share the hobby, swap music and debate vinyl’s timelessness.

“I always said, you just have to play it for people, let them hear it, and it’s case closed,” Fremer said. “Now that people can hear vinyl easily, it’s no contest. But it’s also the collectability.”

Vinyl's latest return vindicates some who, like Fremer, were among the original bellwethers of the medium.

While Fremer built his own online community, Alschuler found one. The Facebook group, Vinyl Carolina, has more than 1,000 users. It’s one of many online groups devoted to vinyl and represents the virtual counterpart to physical meeting places like record shops.

Alschuler said vinyl stuck because it’s one of the last ways for artists to make money in the age of streaming. Industry experts say vinyl sales can offer a larger profit margin for artists, though digital still offers benefits like instant publicity, convenience and fewer, if any, material costs.

For other private collectors, vinyl’s revival is less empirical. David Davis, of Knightdale outside Raleigh, said the album artwork on record sleeves makes the medium unique. For Davis, 34, buying a record means buying two works of art: the music and the album cover.

Davis said every time he buys an album, it’s like collecting a mini-poster. He’s drawn to the psychedelic colors on the cover of Cream’s “Disraeli Gears” or the Andy Warhol banana print on The Velvet Underground & Nico’s 1967 album. He frames and displays autographed covers like a gallery wall in his home.

Thomas Ellis, a senior at UNC-Chapel Hill, said vinyl records represent a physical connection to artists, often in the original way they were recorded.

“It definitely is a different audio experience, listening to a vinyl record,” Ellis said. “It’s warmer. There’s more artifacts in the record, which can be endearing to me.”

Ellis, like many college students, streams music, but he said there’s something intimate about taking the record out of the sleeve, putting it on the turntable and placing the needle.

“In an age where everything is digital, people want to run counter to that,” Ellis said.

For others still, vinyl is purely about the music quality. Vinyl can be enjoyed on a spectrum as new types of music are pressed, originals can be found online and equipment can range from the price of a microwave to a small car.

Fremer said part of vinyl’s immortality is better playback equipment can get more out of a record’s grooves than ever before.

“I'm hearing things in my records I never heard before,” Fremer said. “And I’m still having that experience. This is an adventure that never stops.”

Ellis frequents a resale shop in his hometown of Wilson to find records. He shows up as soon doors open to comb through fresh additions, and one morning, he was surprised to find another shopper had beat him to it.

The man, who could have been 60 years old, started chatting with Ellis and sharing details about his collection. As the two sifted through records, the man would pick something out that he already had and pass it to Ellis.

“He was so willing to share his knowledge with me,” Ellis said.

Alschuler said communities of record hobbyists represent the new opportunity for vinyl -- and its key to survival. As long as people are talking about vinyl, he said, the interest will keep it alive. 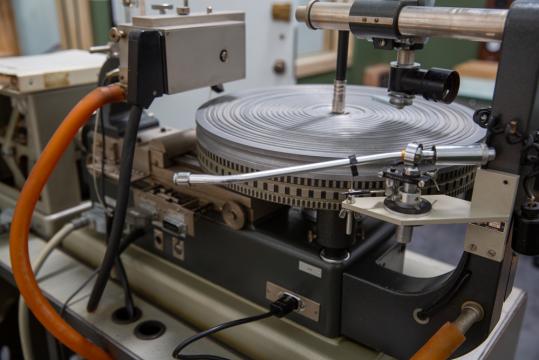 “Whatever it is that brings you onboard and keeps the pressing plants going, keeps the mastering engineers cutting and keeps the industry going, that’s what counts,” Fremer said.

Even the business of buying records has adapted. Online department stores now sell affordable turntables and modern hits on vinyl. Facebook auctions and eBay play a part in the resale market, next to thrift stores and more than 60 North Carolina record shops.

Citizen Vinyl, new to downtown Asheville’s music scene, dedicates its space to interacting physically with vinyl, whether it's listening to it at the bar, browsing the small shop or watching it be created onsite with the first record pressing plant in the state. Building an entire business on the concept of experiencing vinyl is a testament to its attraction as something new, something old and something borrowed.

“Vinyl is not perfect -- a little noise here, a little noise there,” said Peter Schaper, vice president of operations for Citizen Vinyl. “That’s something people like and always liked. The enthusiasts never gave it up. But you’re also going to find young people.” 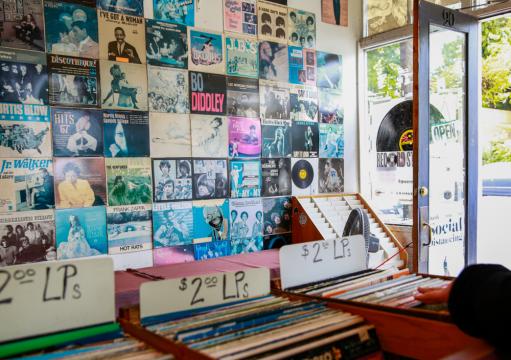 Alschuler, who doesn’t stream music, says vinyl is an alternative to the music listening experience that’s driven by algorithm suggestions or autoplay videos.

“That's where the magic of my music collection is,” Alschuler said, referencing his handpicked collection of South African artists to dance music. “It’s not by sitting back and having things wash over me while I'm doing something else.”

Fremer and Alschuler said analog music is different from digital because vinyl must be tracked down in a way that downloads are not. They say the physical hunt for vinyl makes memories, and the personality of vinyl comes from self-curating a collection instead of accepting suggestions by YouTube or Amazon.

“Everybody's collection is different,” said Boice Tomlin, 48, an Asheville resident and long term record collector. “This is a fingerprint.” 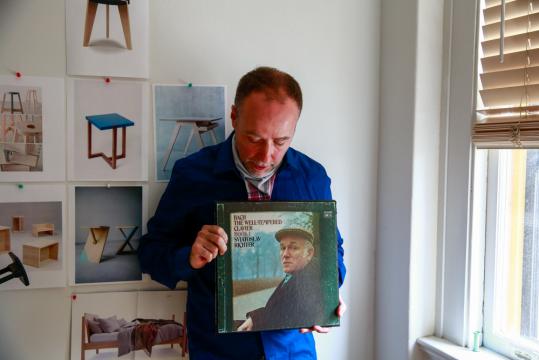 Alschuler agreed. For him, it’s the memory of his kids singing along to a spinning record that brings new life to his collection. The spirit of the community at large lives as a microcosm in his home.

MOLLY WEISNER IS A SENIOR FROM CHARLOTTE, NC, MAJORING IN JOURNALISM AND FRENCH. LAST SUMMER, SHE WAS SELECTED FOR THE DOW JONES NEWS FUND AS A MULTIPLATFORM EDITING INTERN AT THE NEW YORK TIMES. SHE PREVIOUSLY WORKED AT THE DAILY TAR HEEL AS A COPY AND SOCIAL MEDIA EDITOR AND HAS WRITTEN FOR THE CHATHAM NEWS + RECORD, LEAD STORIES AND JJIE. SHE PLANS TO PURSUE A CAREER IN REPORTING AND EDITING AFTER GRADUATION AND EVENTUALLY ATTEND LAW SCHOOL