Gretchen Whitmer of Michigan Was Overlooked, But Not Any Longer 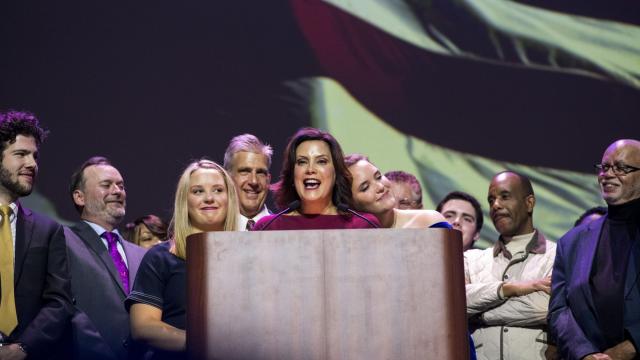 LANSING, Mich. — There is a tendency for people to define Gretchen Whitmer by who she is not.

Whitmer was not one of the surprising, insurgent Democratic nominees for governor this cycle, as her campaign for Michigan’s governorship was flush with money and key endorsements from the outset. She did not have the up-from-nothing background story of some other Democratic candidates; after all, a building in downtown Detroit is named for her father, the former chief executive of Blue Cross Blue Shield. She was not Abdul El-Sayed, the fiery leftist whose campaign for governor captured national attention, but who lost badly to Whitmer in the primary.

And she was not Hillary Clinton, whose 2016 failure in Michigan still reverberates among Democrats throughout the state.

But after a nearly 10-point victory Tuesday over the Republican state attorney general, Bill Schuette, Whitmer is finally getting recognition for who she is: a shrewd politician tailor-made for Michigan, whose pragmatic approach to policymaking has consistently been underrated by opponents in both parties.

In the weeks leading up to the election, a slate of new Democratic stars emerged who gained national attention: Andrew Gillum in Florida, Beto O’Rourke in Texas, Stacey Abrams in Georgia. None won Tuesday — Gillum’s and Abrams’ races have not yet been called — while the Whitmer-led ticket in Michigan soared, flipping two House seats and electing women to key statewide posts.

“The Biggest Democratic Stars Of The Midterms Lost. Here’s Who You Should Know About Now,” read one headline on election night that featured Whitmer’s picture.

Whitmer, 47, has also united a Michigan Democratic Party that was wounded and embarrassed after President Donald Trump’s 2016 victory in the state. She buried the pervasive belief that a ticket led by a woman could not succeed in the industrial Midwest, winning over a once-skeptical Detroit community and even some voters who backed Trump.

“I think that Hillary was viewed as a part of the hyper partisanship of this country, and Gretchen is not,” Johnson said. “She’s rightly viewed as someone who’s reasoned and effective and doesn’t join the shouting.”

Whitmer’s folksy appeal was evident during the campaign as she traversed Michigan, an ideologically diverse state that is still rebounding from a recession that considerably damaged its labor-heavy economy.

Whitmer, the former state Democratic Senate leader, leaned on her statehouse connections early in the race. She also diverged from the traditional Democratic formula for the primary — consolidating support in the outer areas of the state before focusing on Detroit later in the cycle.

Fueled by her “Fix the Damn Roads” bus tour and the belief that Democrats have not adequately reached out to working-class people of all races, Whitmer visited all 83 Michigan counties: union voters in Macomb County who voted for Trump, Flint residents still wrestling with the continuing water crisis and teacher unions hobbled by a Republican administration hostile to labor.

“Love you, Gretchen!” one man called as she headed toward a diner in Lansing, her hometown, a common occurrence for a person who seems to be on a first-name basis with many voters.

“Lots of times people want to see like 30-yard passes or fancy stunt play, but that’s just not her style,” he said. “This is Michigan, where we respect candidates who campaign how they live and work — and she does that.” Whitmer described her approach as being “tethered to the things that matter to people.”

“Part of the failures of past Democratic campaigns, I believe, was in not showing up,” she said. “In assuming that you know what people are confronting and what they need and what they expect.”

Last month in her Lansing campaign office, Whitmer outlined some of the defining contours of her life in public service. She credited her parents, a Michigan power couple who worked in state government, with instilling in her a desire to give back to others. She also cited two life-changing experiences as the motivating forces behind her pragmatic approach to policymaking: caring for her dying mother in the early 2000s while she was nursing her first child and being sexually assaulted in college.

Whitmer described the sexual assault in an emotional speech on the floor of the State Senate in 2013, when she opposed the so-called rape insurance bill, which banned insurance coverage for abortion in private health plans unless women purchased a separate rider. The bill passed over her objections, but she views it as an example of how her values inform her political decisions.

“I’ve come to appreciate that these experiences are what compels me to just come in and fix problems,” she said. “It eliminates my patience for anyone who wants to politicize an issue instead of just rolling up their sleeves and getting to work.”

Republicans struggled to find a consistent line of attack against Whitmer. Schuette, who heavily spent his own money in the governor’s race, tried to tie Whitmer to the tenure of former Gov. Jennifer Granholm, whose administration struggled with a slumping economy and the financial collapse of Detroit during her two terms.

Schuette even called Whitmer by Granholm’s name in a recent debate, though he quickly corrected himself.

The most lasting criticism of Whitmer came from El-Sayed, her primary opponent who later endorsed her. In a recent interview, El-Sayed said “it’s no secret” that his definition of a progressive differs from Whitmer’s. He also said Whitmer’s establishment ties significantly helped her in the primary.

“I think she was really effective at being able to leverage her influence with insiders in the party to keep other people out of the race” who would have eaten into her vote, he said. “She was up against it. And a lot of folks were worried about what her candidacy would mean.”

El-Sayed consistently chided Whitmer on health care. Though Whitmer was integral in helping Michigan expand Medicaid in 2013, she refused to back the Medicare-for-all proposal that El-Sayed and other progressive stalwarts attributed to her close connection with the health care industry and companies like Blue Cross Blue Shield.

Whitmer bristles at the establishment label and said she simply refused to overpromise things to voters she did not feel the current system can deliver.

“You can be both progressive and want to get things done — they’re not mutually exclusive, and that’s what I bring,” she said.

The establishment label sticks particularly well to Whitmer, a product of a powerhouse Michigan family. Her mother, Sherry, was a Democrat and a top lawyer in the attorney general’s office. Richard Whitmer, her father, led the state Department of Commerce in a Republican administration before leading Blue Cross Blue Shield as CEO for years.

The eldest of three children, Gretchen Whitmer had dreams of covering sports for ESPN or a local television station that were upended after she took an internship with a local representative in Lansing, she said. She then decided to forgo broadcasting and enter Michigan State’s law school, igniting a political awakening that coincided with her parents’ rise to prominence in statehouse politics.

She won her first primary election for the state House of Representatives less than three years after graduating from law school, kick-starting her political ascent that culminated with her becoming the first woman to lead a party caucus in Michigan’s Senate.

Republicans have criticized Whitmer for being a lifelong politician and failing to sponsor significant legislation while in the Statehouse. They have also said that in her next job after leaving the legislature, as Ingham County prosecutor, she failed to aggressively investigate Larry Nassar, the former Michigan State gymnastics doctor who was later convicted of charges of sexual molestation and child pornography.

Whitmer has said she pursued the necessary charges based on the information she was given at the time, and the Nassar case was eventually taken out of her jurisdiction. She also notes that she made several reforms to the prosecutor’s office in her six-month tenure, including opening a unit dedicated to investigating domestic violence.

Political experts in Michigan point to the Medicaid expansion as a defining moment for her bipartisan credentials. Some Democrats in 2013 were torn about whether to work with the Republican governor, Rick Snyder, such a key legislative accomplishment, but Whitmer gained fans throughout the state for her willingness to put policy over politics.

Debbie Stabenow, the Michigan senator who won re-election Tuesday, credits Whitmer for helping women secure victories across the ticket. Stabenow said it was especially important to do so by emphasizing their job qualifications, not their gender.

“Sooner or later in American history, this moment was going to come, where women were stepping forward and being recognized as the most qualified candidate,” Stabenow said, as Aretha Franklin’s “R-E-S-P-E-C-T” blared from Whitmer’s campaign bus Tuesday. “And that didn’t happen because we were in a backroom and planned this together, but because each of us ran on our own merits.” The next song in the queue was Whitmer’s favorite: Lizzo’s women’s empowerment anthem, “Good as Hell.”

“Boss up and change your life,” the future governor sang. “You can have it all, no sacrifice.”