Greece’s Bailout Is Ending. The Pain Is Far From Over. 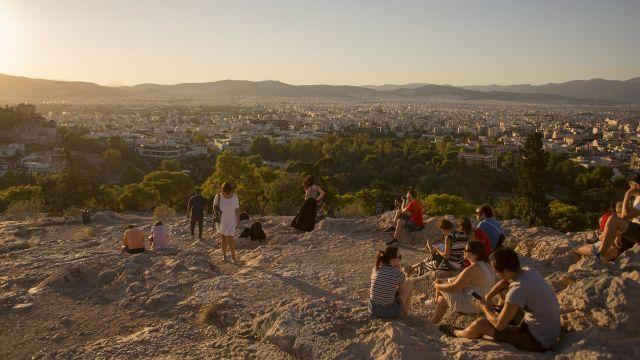 ATHENS, Greece — When Dimitris Zafiriou landed a coveted full-time job two months ago, the salary was only half what he earned before Greece’s debt crisis. Yet after years of struggling, it was a step up.

“Now, our family has zero money left over at the end of the month,” Zafiriou, 47, a specialist in metal building infrastructure, said with a grim laugh. “But zero is better than what we had before, when we couldn’t pay the bills at all.”

Greece is reaching a milestone in one of the most ruinous financial crises to hit Europe. On Monday, the country will officially end its reliance on more than 320 billion euros, or about $360 billion, of bailouts, opening a path to a new era of financial independence. The economy is slowly returning to growth, and European leaders are declaring an end to a debt crisis that nearly broke up the euro.

But the price of Greece’s apparent turnaround has been steep. A wrenching downturn, combined with nearly a decade of sharp spending cuts and tax increases to repair the nation’s finances, has left more than a third of the population of 10 million near poverty, according to the Organization for Economic Cooperation and Development.

Household incomes fell more than 30 percent, and more than a fifth of the people are unable to pay basic expenses like rent, electricity and bank loans. A third of families have at least one unemployed member. And among those who do have a job, in-work poverty has climbed to one of the highest levels in Europe.

“Any society that lost a quarter of its economy will have severe social problems,” Euclid Tsakalotos, Greece’s finance minister, said in an interview. “But things are improving, and people can see that they are improving.”

Zafiriou has only just steered out of a cycle of constant job searches and sporadic income. Like many Greeks, his life was upended during a lost decade marked by rampant unemployment, steep wage cuts and spiraling personal debts.

A newly stable economy has prompted a return to hiring at the Greek construction company where Zafiriou recently landed work. But his monthly pay of 800 euros is far below the 1,500 euros he used to earn, at a construction firm where he was employed for 20 years. When the crisis hit, that firm delayed paying employees, first by two months, then four — a practice that became common at many businesses.

His wife, Sotiria, went unpaid for almost a year in 2013, after the Greek supermarket chain where she worked declared bankruptcy. Another company bought it, and her monthly salary of 1,100 euros was cut to 800 euros. She was eventually paid about half of what she was owed. But Zafiriou said he never received nearly 13,000 euros in back pay from his old firm.

The family’s bills quickly became insurmountable. They could no longer pay for electricity or a loan on their modest two-bedroom apartment in Keratsini, a working-class suburb of Piraeus, near Athens. The only thing shielding them from eviction — along with thousands of Greeks in similar straits — was a law forbidding banks from repossessing most borrowers’ primary homes.

The family slashed spending on clothing and groceries, and halted therapy for their daughter, Anamaria, 13, who has dyslexia. Low on cash, Zafiriou sold all of their gold jewelry, except for the cross used at Anamaria’s christening.

With his new job, things are looking up. The couple has rehired a tutor for Anamaria, and Sotiria Zafiriou no longer needs to shop for the very cheapest produce or meat. The primary aim is to pay down all the family’s debts as quickly as possible, even if that leaves nothing at the end of the month.

“Greece is getting better,” Zafiriou said. “But that doesn’t mean things have turned around.”

Even after the bailout, Greece must continue belt-tightening for years, while creditors monitor its fiscal discipline and progress on structural reforms. Prime Minister Alexis Tsipras has promised to ease up on those most affected with better social support and wages, and spoken of a possible reduction in steep business taxes to spur hiring. Unemployment has fallen to 19.5 percent from 28 percent, but remains the highest in the eurozone.

Tsipras wants to build momentum after the economy grew 1.4 percent last year, slowly recovering from a contraction reminiscent of the Great Depression in the United States. Greece is running a budget surplus, minus interest payments on its still mountainous debt. Tsipras is aiming to start selling Greek bonds again on financial markets within two years.

That outlook has lent a sense that the crisis may at last be fading. At the port of Piraeus, near the Zafiriou family’s home, thousands of tourists board hulking ferry boats for vacations on the sunny Greek islands after visiting the Acropolis. Tourism has been surging, helping to reinvigorate growth. Small businesses have sprung up to cater to the crowds, and construction-related activity is resuming.

Other jobs are being created as manufacturers shift sales outside the Greek market, stoking a rise in exports, which now make up a third of economic activity, up from a quarter before the crisis.

At Bright Special Lighting, a midsize maker of industrial and home lighting systems, the owner, Nikos Vasiliou, tilted half his production toward clients who can afford it, including Google’s European headquarters in Ireland and Vodafone stores in Paris.

Vasiliou said he turned a profit last year for the first time since the crisis, and added 25 employees to his 143-person workforce. All but 10 are on permanent contracts, averaging 1,100 euros a month — a decent salary in today’s economy.

Yet for the vast majority of workers, Greece’s labor market remains a rough-and-tumble landscape.

To make the economy more competitive, Greece’s creditors — the International Monetary Fund, the European Central Bank and the European Commission — set austerity terms that included suspending collective bargaining and easing conditions for firing. Salaries in the public and private sectors fell more than 20 percent. The monthly minimum wage was cut to 586 euros in 2012, the second-lowest in the eurozone, from 751 euros.

Today, a growing share of jobs are minimum wage. At least half involve temporary or part-time contracts. While that helps lower unemployment figures, many private-sector employees now earn less-than-poverty wages, according to the OECD, as do nearly half of Greek households with two children. Others work even more precariously with no contract at all, as employers seek to evade paying overtime and social security charges.

It is a sign of the uneasy nature of Greece’s recovery that, even with a coveted full-time contract, Zafiriou, the construction worker, remains wary. He has been working since June, but many companies have shed employees just before their work anniversary, after which they would have become harder to fire.

For those who fell further during the crisis, even getting to that point seems out of reach.

On a recent weekday, Georgia Pavlioti, 50, a single mother, sat down with a social worker at Praksis, a humanitarian organization that supports Greeks who have fallen into hardship.

Pavlioti, a former supervisor at a Greek polling company, never dreamed she would need social assistance. Her daughter was born at the start of the crisis, but by the time her maternity leave ended, the company had downsized and she could not find other work. Her husband lost his job as a security guard. The financial loss strained their marriage, and she filed for divorce — something increasing numbers of Greeks are resorting to since the crisis began.

Eventually, she found informal work cleaning houses and caring for the elderly, including changing their adult diapers. “I couldn’t believe I had fallen so far,” Pavlioti said, fighting back tears. “It shook my self-image and confidence.”

Praksis offers job counseling, as well as psychological and financial support. It still is not enough. As a single mother, Pavlioti needs state-financed child care but does not qualify because her divorce is pending.

The longer she stays out of the formal job market, the harder it is to get back in. Recently she took a job as a baby sitter with flexible hours, earning 450 euros a month — enough to pay the rent and bills, though not much else.

“The end of the bailout makes no difference in our lives,” Pavlioti said. “We are just surviving, not living.”