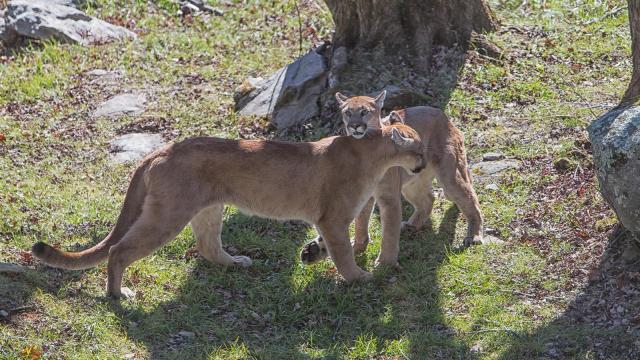 The brother and sister were found, orphaned and too young to hunt, in Idaho last January, and were adopted by Grandfather Mountain in March.

Since that time, they have been in The Plaza, Grandfather Mountain’s spacious quarantine facility, where the park’s keepers helped prepare them for life on the mountain.

Grandfather Mountain habitats curator Christie Tipton said the cubs are adjusting better than anticipated to their new surroundings, and they’ve had no qualms showing it – sunning on rocks, leaping from tree to tree, wrestling and generally enjoying life as a big cat. 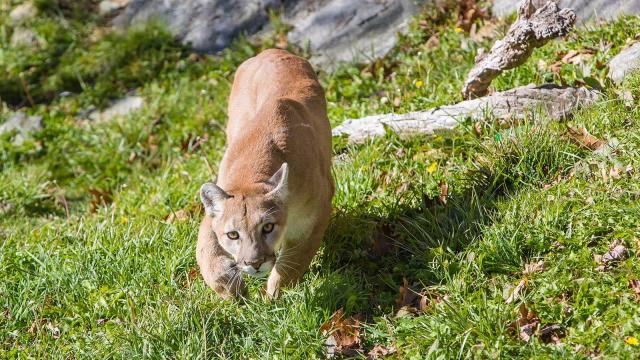 “They were so excited, running around, tackling each other, chasing each other, climbing the trees, sharpening their claws; they are just so excited to be in that big habitat. It’s just amazing, and I’m so happy for them," she said.

Logan and Trinity, who are thought to be about 2 years old, join Aspen, a 14-year-old cougar and favorite of Grandfather visitors. Due to their age differences, and the fact that Aspen was born in captivity, the three do not share a living space, but will instead alternate time spent in the habitat.

Logan was named for the Utah town in which the Grandfather Mountain team landed on their journey West, while Trinity was named for a mountain peak in Idaho.

The cubs' trip from Idaho and some renovations to the cougar habitat were paid for by Grandfather backers Bob and Susan Wilson.