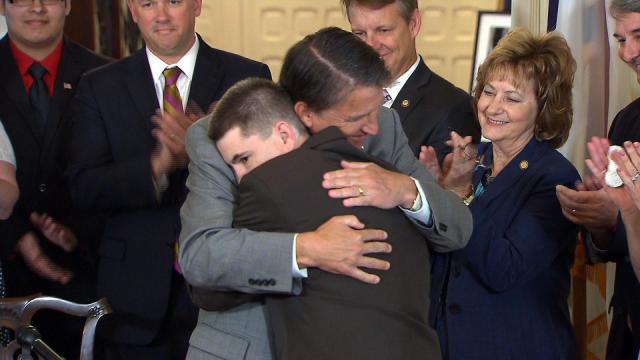 Senate Bill 445 is named "Burt's Law" after Burt Powell, a young man with developmental disabilities who was sexually abused over the course of a year by a manager in a Conover nursing home. The man told Powell he would harm Powell's family if he told them about it.

Other workers at the home said they did not report the abuse to authorities because the abuser had threatened their jobs.

The manager died before he could be tried, but Burt's parents, Tom and Laurie Powell, brought Burt's story forward to push for more protections for residents in facilities.

Under "Burt's Law," any staffer or volunteer who witnesses any type of abuse or physical harm to a resident must now notify the Department of Social Services, local law enforcement and the local district attorney's office within 24 hours of the incident. Failure to do so is a misdemeanor.

"There is no excuse for staying silent if you see abuse," McCrory said.

The legislation also increases the penalties for intentionally injuring residents and for taking their personal property.

The governor talked about his mother's 12-year stay in a facility as she battled Alzheimer's disease.

"We're all going to have to trust someone sometime in our life," he said, "but if anyone within these homes betrays that trust, everyone suffers."

McCrory called Burt Powell, who was present at the bill signing, a "hero" for telling his story and said the man's parents are "courageous" for publicizing it.

"I couldn't imagine being a parent and having to hear this story about your own child, but to do that, you're protecting other people," he told the Powells.