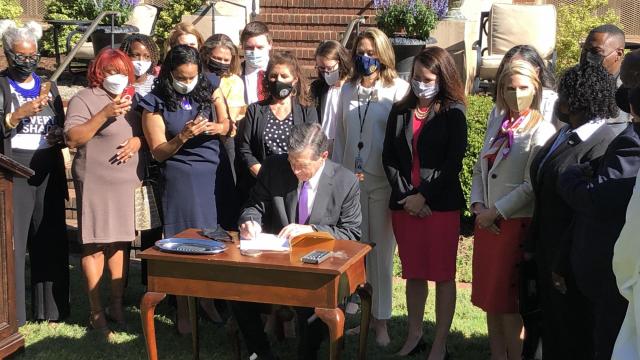 The new law also mandates nutrition standards for pregnant women and includes new protections for all women who are locked up.

House Bill 608 had bipartisan sponsors and passed the state legislature unanimously, but lawmakers involved said it started out as an uphill battle to win law enforcement support. Advocates have pushed on this issue for years.

It's not clear how often women are shackled on the way to, or even during, delivery, but one woman recently filed a federal lawsuit over her treatment while at the North Carolina Correctional Institution for Women, in Raleigh.

Dr. Kerianne Crockett, an ob/gyn at Vidant Medical Center in Greenville, described a separate case Friday, saying that, in 2019, sheriff's deputies from an area jail refused to unshackle a woman who delivered while being transported, "despite my pleas."

Crockett teared up Friday remembering the incident, and she was credited with calling every sheriff in the state to advocate for change.

Also at the bill signing Friday, Kristie Puckett-Williams, once incarcerated, now a prominent criminal justice advocate with the state chapter of the American Civil Liberties Union, said she was "caged and shackled while pregnant with my twin daughters."

"To all my sisters behind the wall, we see you, we hear you, we have not forgotten you," Puckett-Williams said during a bill signing ceremony at the Executive Mansion.

The new law goes into effect Dec. 1. It covers jails and prisons, and it limits shackling during the second and third trimesters, during labor and delivery and during a six-week postpartum recovery period.

It allows limited exceptions during transport, provided the woman isn't in labor, as well as when a correctional worker makes "an individualized determination" that wrist cuffs, and only wrist cuffs, are needed. That decision triggers a written report, and the reports will be aggregated and forwarded to Department of Public Safety leadership.

The law requires instruction on parenting skills, child health and the effect alcohol and drugs can have on a baby, and it says pregnant women must be provided proper food and dietary supplements for free.

Pregnancy is not uncommon in state prisons. In 2018, after reports that two women were shackled despite medical staff asking that their restraints be removed, a prisons spokesperson said there had been 81 in-custody deliveries the year before.

House Bill 608 also dictates rules relevant to all women in prison, saying menstrual products must be available for free and that inspections by male employees when a female is undressed, such as in the shower, can happen only when a female employee isn't immediately available. These also must be written up and reported up the chain of command.

The measure is part of a continuum of criminal justice reforms that passed the state legislature in recent years, all with bipartisan support. Cooper, a Democrat, said Friday that he will push for further changes and that he was encouraged by the bipartisan support for changes.

Many of these bills have been pushed forward by GOP members in the state's Republican-controlled legislature.

Among other next steps, Cooper said Friday that re-entry efforts to help people transition out of prison "can be redoubled" in North Carolina.

"I think this legislation is a matter of basic human dignity," he said of the shackling bill. "It’s also matter of safety, and it’s also a matter of respect for families, mother and child, no matter where they are and no matter who they are."